Directed by Adam McKay
A thought-provoking parable, both funny and sad, about the reactions to the consequences of climate change.

Writer and director Adam McKay has hit the jackpot with this sci-fi thriller, cutting-edge satire, and thought-provoking parable about climate change. He has called this ambitious film "a dark satire in the school of Wag the Dog, Dr. Strangelove, and Network."

Considering the challenge of dealing with the end-of-the-world consequences of climate change, McKay asked himself, "How do you tell this story, the biggest story in 66,000 years, without exaggeration? How can we be looking at the greatest story in human history but most nights I'm not hearing it talked about -- or when it's being talked about, it's in the fourth block, or the ninth story down."

Kate Dibiasky (Jennifer Lawrence), an astronomy grad student at Michigan State University, and her professor, Dr. Randall Mindy (Leonardo DiCaprio), make the astonishing discovery of a comet zooming within our solar system. The problem: it's on a head-on collision course with Earth. Its impact in just six months would be an extinction level event for all life on the planet.

There's another major problem. No one really seems to care. Turns out warning humankind about a planet-killer the size of Mount Everest is a tough sell. People who do not know much about astronomy figure the experts will take care of such complicated things. Other people deny that it is happening or assert that it is some kind conspiracy. 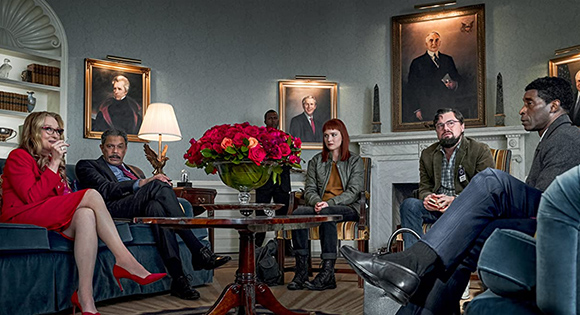 Kate and Randall's spirits are lifted when they get a meeting with U.S. President Orlean (Meryl Streep), but this conservative politician is more interested in the upcoming midterm elections than anything the two Midwestern astronomers have to say. Her sycophantic son and Chief of Staff, Jason (Jonah Hill), is even more indifferent than his mother. Told they need to mobilize every possible way to divert the comet from its path, the President says she will sit tight and assess. "You cannot go around saying to people that there's a 100% chance that they're going to die," she says. 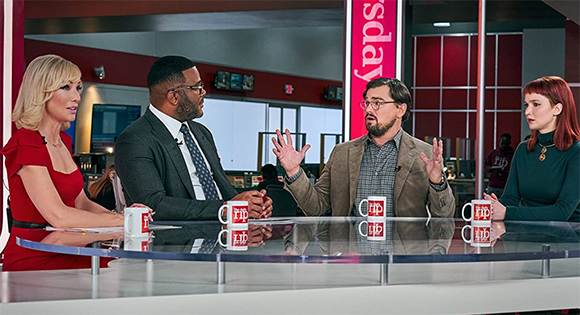 Appalled at the officials' attitude, Kate and Randall, with the help of a NASA official, Dr. Teddy Oglethorpe (Rob Morgan), embark on a media tour to tell the American public about the impending disaster. Their first stop is "The Daily Rip," a very popular and upbeat morning show. The host, Brie Evantee (Cate Blanchett), is immediately sexually attracted to Randall and cannot keep her hands off him. Her co-host, Jack Bremmer (Tyler Perry), is not really interested in the comet catastrophe (unless it will take out his ex-wife's house in Florida) so he asks whether or not Randall thinks there is life on other planets. The hosts are just following the code voiced by a producer of "The Daily Rip": "Keep it light and fun."

Trying to break into the 24-hour news cycle and gain the attention of the social media obsessed public proves to be shockingly comical. When Kate erupts on television suggesting that if people only realized that the end of the world is coming, they would stay up all night crying, the image of her angry face goes viral as a meme. Later, after Randall is hired as a White House Science Advisor and appears to have been co-oped by the comet deniers, she goes home to Illinois where she starts a relationship with a young shoplifter (Timothee Chalamet). (Listen for his prayer at the end of the film.) 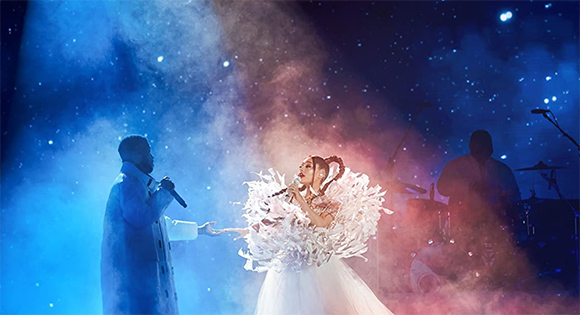 What will it take to get people to just look up? Two rock stars (Ariana Grande and Kid Cudi) put on a benefit concert urging people to face the truth. But already a counter-movement has emerged fed by people who are convinced that the comet, which is composed of valuable minerals, will bring new jobs after impact. Others place their hopes in a solution offered by the third richest man in the world, Peter Isherwell (Mark Rylance) of the Bash company. He finds a way to amalgamate runaway capitalism, corporate power, and self-centered mysticism into a passport for the "cool rich" to escape the comet. 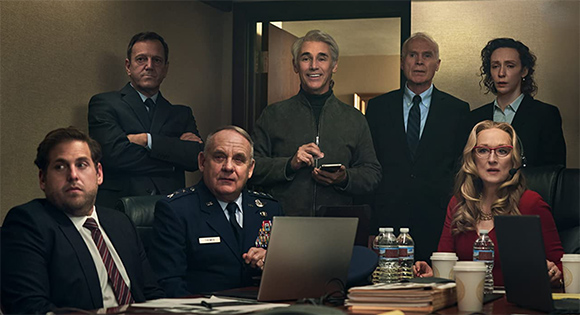 Don't Look Up telescopes the predicted disasters resulting from climate change into a six-month period of watching an approaching comet. The public polarization and denial it depicts is also similar to what we have seen and continue to see in response to the COVID pandemic.

The cultural criticism here is actually even broader than those two specific developments. In an era when most of the media has muted their criticism of what is happening around the world, McKay brings to the surface the twisted logic and the power plays of the rich and the famous. Here is a list of the cultural warps that are touched on in this film:

In an interview, McKay stated:

"I've been really terrified about the climate, the collapse of the livable atmosphere. It seems to be getting faster and faster. Yet for some reason, it's not penetrating our culture."

Hopefully, this film will help puncture the cultural ignorance.

In our Topic on Climate Change, for which we collected our quotes, books, films, and other resources on this subject, we affirmed this prediction from an Intergovernmental Panel on Climate Change, "Nobody on this planet is going to be untouched by the impacts of climate change." We also noted:

"The indifference of large segments of the American public are illustrative of what Daniel Kahneman, winner of the 2002 Nobel Prize in economics, calls 'loss aversion.' Climate change is seen as too distant a problem that requires sacrifices now to avoid losses far into the future. Many people do not want to take a gamble on the future. Another reason for avoidance of climate change is that it brings us into a close encounter with our own mortality and the possible collapse of the world we love and cherish."

So where does this leave us? Again, from our Topic:

"We have seen a shift toward greater climate change awareness among spiritual people of all stripes, and we are hopeful that those who are still in denial about it will turn themselves around and join us in tackling this environmental, economic, and social problem as a central element in our spiritual activism."

Read our reflections on Love in Don't Look Up