Day to honor the courage, the struggles, and the contributions of refugees.

The UN Refugee Agency describes a growing crisis in the world today:

"The refugee challenge in the 21st century is changing rapidly. People are forced to flee their homes for increasingly complicated and interlinked reasons. Some 40 million people worldwide are already uprooted by violence and persecution, and it is likely that the future will see more people on the run as a growing number of push factors compound one another to create conditions for further forced displacement.

"Today people do not just flee persecution and war but also injustice, exclusion, environmental pressures, competition for scarce resources and all the miserable human consequences of dysfunctional states.

"The task facing the international community in this new environment is to find ways to unlock the potential of refugees who have so much to offer if they are given the opportunity to regain control over their lives."

The United Nations and many other agencies and organizations are trying to provide assistance to refugees around the world. Yet at any given moment, millions of poor and vulnerable men, women, and children are making their way across borders, walking with all their possessions on their back or piled upon trucks and buses. More than one million a year hand themselves over to untrustworthy smugglers promising them passage to a safe haven. In new locations where they do not know the language, they are treated with disdain by locals who see them as competition for their jobs and resources. Disease spreads easily through refugee camps, compounding their problems.

Honor the courage of refugees in facing a trinity of demons — fear, poverty and disease, and hatred. Include refugees in your prayers as you remember their struggles and hardships and their odyssey to achieve a better life.

Make a contribution to an organization providing services to refugees. 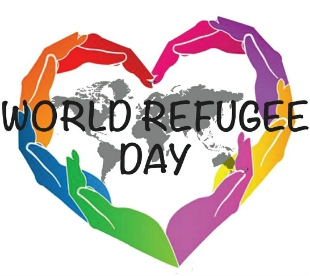