Ayat Jamilah: Beautiful Signs A Treasury of Islamic Wisdom for Children and Parents

By Freda Crane, Sarah Conover
A top-drawer collection of Islamic stories and folktales for families to read aloud and respond to with their hearts.

Sarah Conover is the compiler and adapter of this top-drawer collection of Islamic stories. The book is part of a series called This Little Light of Mine, aimed at parents and their children; others present Buddhist and Chinese wisdom. Working on Ayat Jamilah with Conover is Freda Crane who has developed Islamic curriculum on three continents and has long been active in the educational activities of the Islamic Society of North America. The stories in this anthology are from the Qur'an, the divine revelations given to the Prophet Mohammad; from the hadiths, the words and actions of the Prophet Mohammad; stories of historic Muslims; and folktales.

To set the mood, Freda Crane shares some stories about the Prophet Mohammad. He was a man of great kindness and infinite patience. "As a deliberate insult, one neighboring woman would empty her garbage in front of Mohammad's house each day and verbally insult him at every chance. When Muhammad didn't see her for two days and there was no garbage on his doorstep, he asked someone about her. Muhammad was told that she had fallen sick. So he immediately went to visit, to ask what he could do to help her."

There are stories here from West Africa, China, Pakistan, Iran, Turkey, Indonesia, Azerbaijan, the Middle East, Mali, and Syria. A few of our favorites are "The Bandage," "The Brothers." "The Head and the Lute," "Whose Crown," plus stories about Mulla Nasruddin. This paperback is highly recommended for seekers from all religious traditions. 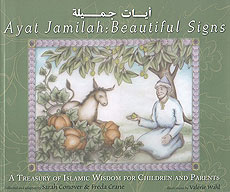