Animals and Christianity A Book of Readings

By Andrew Linzey, Tom Regan
An anthology on Christian responses to animals through history revealing mostly indifference and domination theories.

Andrew Linzey is an Anglican priest and an internationally known theologian focusing on Christianity and animals. He is a member of the Faculty of Theology at the University of Oxford and holds the world's first post in theology and animal welfare at Blackfriars Hall, Oxford. In this paperback edited with Tom Regan, a philosophy professor, he delivers a collection of essays on the treatment of animals in Christian history. The result is a minority defense of the rights of animals and the need for their protection, contrasted with a large number of examples of silence, neglect, domination, disbelief in animal redemption, the pre-eminence of human beings, and advocacy of animal sacrifice and killing for food.

The most interesting section of this anthology is titled "Reverence, Responsibilities, and Rights" with selections on Albert Schweitzer's reverence for life ethic, the duty of mercy by Humphry Primatt, Andrew Linzey on the "theos-rights" rights of animals, along with an agreement by Tom Regan.

The majority of essays in Animals and Christianity prove conclusively that the churches and believers have a long way to go in revising their ideas and practices toward all of God's creations. 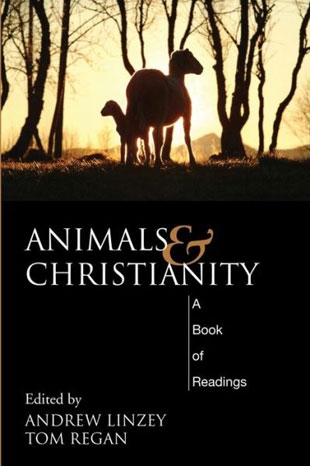