Religion Gone Astray What We Found at the Heart of Interfaith

By Don Mackenzie, Jamal Rahman, Ted Falcon
Common core teachings of Judaism, Christianity, and Islam that support the healing of the grievous problems of exclusivity, violence, sexual inequality, and homophobia.

"Religions go astray when they contribute more to human suffering than they do to human healing. We go astray as individuals when we forget the essential nature of our being and identify only with the things we have and the things we do. We become human doings and human havings rather than human beings, and the consequences are greater separateness, conflict, and hopelessness." So write the Interfaith Amigos, Pastor Don Mackenzie, Rabbi Ted Falcon, and Sheikh Jamal Rahman, the authors of Getting to the Heart of Interfaith.

Three of the world's religions (Judaism, Christianity, and Islam) have justifiably gotten a bad rap for doctrines, attitudes, and actions which violate the core teachings of the Abrahamic traditions. For Jews, that core teaching is oneness; for Christians, unconditional love; and for Muslims, compassion. In addition, individuals and institutions of these religions have not been true to the spiritual practices which undergird the core teachings: for Jews, the weekly reminder of meaning and purpose in the Sabbath; for Christians, the cultivation of forgiveness and renewal; and for Muslims, the spirituality of mind and heart. (See the excerpt for more on these points.)

The Interfaith Amigos describe and assess four common problem areas in the Abrahamic faiths. Mind you, these are not minor or easily transformed toxins but will require major effort and collaboration to heal:

1. Exclusivity: Stacking Claim to a One and Only Truth
2. Violence: Justifying Brutality in the Name of Faith
3. Inequality of Men and Women: The Patriarchal Stranglehold on Power
4. Homophobia: A Denial of Legitimacy

In each section, all three men offer personal reflections, scriptural and institutional support for the problem area, and their commentary and spiritual practices. The poisonous fallout from these common problem areas in the Abrahamic traditions has been catastrophic down through the ages and the last area, homophobia is dividing churches all across the country and around the world today. Our Fundamentalist brothers and sisters in the Americas and Africa are avid crusaders against ordaining homosexuals or allowing them to marry.

Despite the divisiveness and hatred brought on by these four common problems, the Interfaith amigos believe that they can be used as catalysts for greater purpose and meaning. They write:

"The very failings that some would use to condemn the Abrahamic traditions can serve as the foundation for renewal. This is the possibility of a radical renaissance of spirit through the transcending wisdom of our heritage."

We always enjoy the books by the Interfaith Amigos; their friendship and willingness to collaborate come through on every page. And their practices are so doable that we'd love to see a book totally devoted to them! 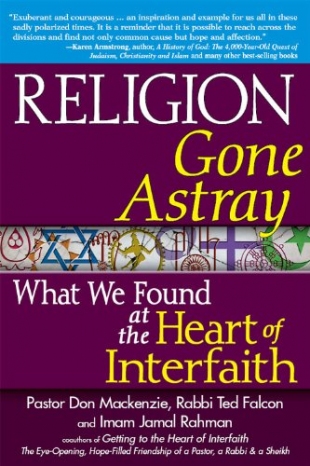