By Robert Frager
An enlightening collection of talks about the Sufi path and its emphasis on heart, practice, and spiritual maturation.

Robert Frager founded the Institute of Transpersonal Psychology where he directs the Spiritual Guidance Masters Program. Ordained a Sufi sheik in 1985, he is president of the Jerrahi Order of California. His books include Heart, Self, and Soul, Love Is the Wine (editor), and Essential Sufism (co-editor). Frager is one of the Living Spiritual Teachers profiled on this website.

Sufi Talks consists of an enlightening series of sohbets, or conversations about spiritual matters, which are usually given on a weekly basis during Sufi gatherings. The followers of this path, called dervishes, come to immerse themselves in the energy and wisdom that flows from their sheikh's teaching.

Frager has included a glossary at the end of the book, and in various chapters has reprinted question-and-answer sessions taking place during his talks.

In the first three chapters, he discusses the various obstacles which Sufis face on the spiritual path. One of the most difficult battles is with the narcissistic ego which wants its own way. Frager points out that we have a great ally in this struggle: "an inner Moses, our own inner liberator."

The great Sufi saints and others teach us that it is important to work with the ego and not try to beat or starve it. Best to have a conversation with our ego telling it to chill out and not try to control everything. Help it see that it's only part of the psyche.

Frager sees Sufism as a path of spiritual maturation — "a path of acquiring faith and developing the capacity for service." He also wants us to think of the Sufi community as a laboratory meant to teach us about love.

We can put love into action through the practice of respect. The author quotes his spiritual master Muaffer Efendi who told him: "Always respect others. If you are with someone older than you are, respect them because they have had more time to pray. And respect those who are younger than you because they've had less time to sin."

Frager challenges us to work on building habits of the heart which involve openness, hospitality, and everyday spirituality. As an old Sufi saying puts it: "A person who can properly serve a glass of tea can do anything." Spiritual discipline covers all our words and deeds.

According to Frager, the world only becomes a spiritual enemy if we put it between ourselves and God. Otherwise it is an ally revealing God's face everywhere.

Inner work is an adventure for the Sufi. That is why the author discusses the essentials of courtesy (called adab), service, and hospitality. These qualities not only create a foundation for good character, but they facilitate true and lasting connections with others.

Good adab is putting others first and sensing their needs before they do. It is making the most of little things and bringing joy and peace to others.

Frager closes the book with his sohbets on the lessons of Ramadan, the Night of Power, New Year's Evening, marriage, spiritual poverty, generosity, and on waking before we die.

Frager insists that we take responsibility for our spiritual lives. As he shows through these conversations, Sufism is a path of practice in which our hearts are polished and we are constantly on the lookout for fresh ways of loving one another. 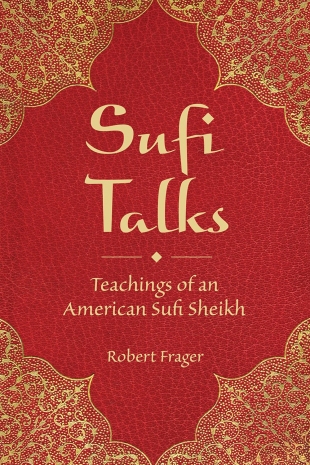