Children of the Days A Calendar of Human History

By Eduardo Galeano
An impressive work of cogent, creative insight from a prophet who opens our eyes to the world as it could be if we would fight for peace, justice, and human equality.

Eduardo Galeano is one of Latin America's most distinguished writers. He is the author of the three-volume Memory of Fire (Nation Books, 2010) as well as Open Veins of Latin America, Soccer in Sun and Shadow, Days and Nights of Love and War, The Book of Embraces, Walking Words, We Say No, Upside Down, Mirrors (Nation Books, 2010), and Voices of Time. Born in Montevideo in 1940, Galeano lived in exile in Argentina and Spain for years before returning to Uruguay in 1985. His work has been translated into 30 languages and he is the recipient of many international prizes, including the first Lannan Prize for Cultural Freedom, the American Book Award, the Casa de las Americas Prize, and the First Distinguished Citizen of the region by the countries of Mercosur.

In a time when few are willing to speak out against human injustice, Eduardo Galeano speaks up loud and clear in this day book with short but pungent selections for each day of the year.

In a time when the rich get richer and gain more power and control over the lives of the poor, Eduardo Galeano celebrates the small acts of heroism done without fanfare by those whom history has passed by and forgotten.

In a time when military might is praised around the globe, Eduardo Galeano chooses to pay allegiance to the peaceful alternatives to shock and awe.

In a time when the peoples of the world seem to be united under the banner of capitalism, Eduardo Galeano marks the deeds of those who walked the talk of a simpler and more sane life and didn't think that those with the most toys at the end of the day win.

In a time when history is being re-written by sound-bite specialists, Eduardo pays tribute to a scraggly band of outsiders, rebels, and radicals who sought to make freedom and equality available to all.

In a time when the West looks down on the rest of the world, Eduardo Galeano tells the stories of artists, leaders, and visionaries whose actions have had an important impact on global developments.

Among our favorites in this eye-opening and prophetic collection are:

• Tributes: to Mozart's music, which is often used to welcome newborns into the world; to Chekov for saying everything that needs to be said in his inimitable plays; to Bob Marley for his wail and his prophetic songs about warrior slaves; to Georgia O'Keefe's adoration of flowers and women's bodies; to Albert Einstein for his curiosity; to Abdul Kassem Ismail, a tenth-century Persian who came up with a creative way to keep his books safe from destruction by war.

• Little known facts, such as: every two weeks a language dies; whistling is the chief way of communicating in La Gomera; in July 2008, the U. S. government decided to remove Nelson Mandela's name from its list of dangerous terrorists; in the same year Ecuador recognized that nature had rights as if it were a person; the world is becoming a mass military base; in 1948 Costa Rica abandoned the armed forces.

Eduardo Galeano's Children of the Days: A Calendar of Human History is another impressive work of cogent and creative insight from a prophet who opens our eyes to the world as it is and as it could be if more of us would fight for peace, justice, and human equality. 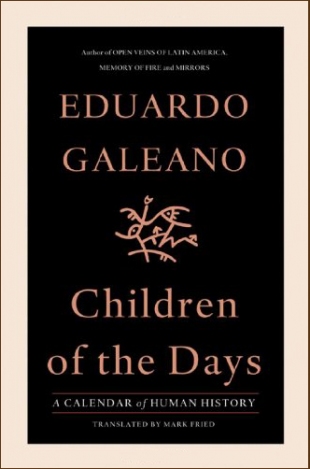