By Richard Rohr
A sterling collection of spiritual essays which can be seen as part of this prolific Franciscan priest's legacy work.

Richard Rohr is a Franciscan priest in the New Mexico Province. He founded the Center for Action and Contemplation in Albuquerque, New Mexico, in 1986; he serves as its founding director. Rohr is the author of more than 20 books, an international speaker, and a regular contributing writer for Sojourners and Tikkun magazines, as well as the CAC's quarterly journal, Oneing, and its daily online posts. Rohr is profiled on Spirituality & Practice as a Living Spiritual Teacher.

In this magisterial collection of daily spiritual readings, Rohr gives us a treasure-trove of insights into the contemporary religious scene in all its dramatic variety. He starts off with a bang with two out-of-the-box definitions of faith and prayer, plus a memorable mantra:

1. Faith is a relationship with the Divine where "there is Someone dancing with you, and you no longer need to prove to anyone that you are right, nor are you afraid of making mistakes."
2. Prayer is "like practicing heaven now."
3. A memorable mantra: "Your image of God creates you."

Other notable themes in this first section called "Methodology" include pieces on Christianity as a lifestyle (simple, nonviolent, shared, and loving); the Bible as a conversation about power; spirituality that creates people willing to let go of their need to be first, to be right, to be saved, and to be superior; and contemplation as an alternative mind.

In a section on "Foundation," Rohr muses on the mostly undeveloped image of God as Trinity with essays on the feminine face of God, mystical experience as the best cure for low self-esteem, a gospel of pure grace, and spacious silence that engenders a spacious God.

Although Rohr has great respect for regular spiritual practice, he is wary of those who are trying to be spiritual before they have learned to be human. He is happy to see scientists whose studies have brought them to their knees in awe for the great Mysteries of the universe. These observations are part of the section on "Frame" where the author speaks out against the false distinctions between the sacred and the profane.

So much ignorance and pain has been brought into the world by religious people who have excluded other people, places, and beliefs from the realm of the sacred. In "Ecumenical," Rohr explains that "everything belongs." That is why mystics are willing to be servants of all. That is why the "emerging" church is making waves with its nonjudgmental stance. That is why an inclusive spirituality lies just around the next corner.

In "Transformation," Rohr quotes Bill Plotkin who calls the first half of life "our survival dance" and the second half of life "our sacred dance." Rohr muses upon the supreme art of letting go which spawns happiness and freedom. We nod in agreement with his view that "God is the only one we can surrender to without losing ourselves." In Rohr's understanding of things, unlearning plays a huge role in the second half of life when we are squaring off against debilitation and death.

"Divine union, not private perfection is the goal of all religion," writes Rohr in "Goal." Here he delivers a set of snappy essays on wonderment, starting with yes, smiling as a form of salvation, unitive consciousness, the mystery of presence, and the freedom of not knowing. This sterling collection of meditations is part of Rohr's legacy work in seven parts. By the time you finish reading it, you will have a deep sense of communion with this priest and his visionary Christianity! 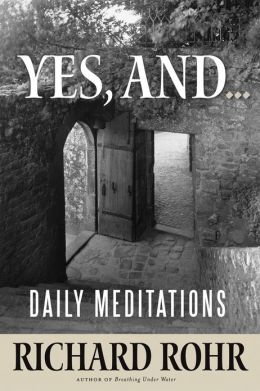