To Be a Man A Guide to True Masculine Power

By Robert Augustus Masters
A reframing of conventional views of manliness that opens doors to new possibilities for this besieged gender.

"I have seen many men suffer by shutting themselves off from their own depths, stranding themselves from what would enable them to have truly fulfilling relationships — not just their empathy, vulnerability, and capacity for emotional literacy, but also their true power and resolve, their authenticity, their capacity to anchor themselves in real integrity. There is a deeper life for men, a life in which responsibility and freedom go hand in hand and level upon level, a life in which happiness is rooted not in what we have but in what we fundamentally are." This positive vision statement is by Robert Augustus Masters, a pioneer of the evolving men's movement and author of 14 books including Emotional Intimacy, one of Spirituality & Practice's Best Spiritual Books.

The conventional definitions of manhood promoted by our culture, media, and most male groups emphasize power, aggression, anger. and success. It is hard to live up to the super-heroes on the screens at the local movie theater but even more daunting and difficult to prove your courage, bravado and guts to other males. Many of us go through incredible pain and suffering trying to win the approval of alpha males who take great pleasure in watching nerds and other less physically able males fail in the physical tests they are given in order to be admitted to the gang, the club, or the elite inner circle.

Masters shares his adoration of Tarzan and throughout the book offers cogent and thought-provoking commentary on films such as Fight Club, Avatar, Fearless, and others. The author presents plenty of insights into the ways these movies have impacted the psyche and soul of men as they play out their own stories with buddies, business partners, club members, and others. Masters writes:

"Intimate relationship is arguably the twenty-first century's ashram. It's not, however, a retreat or refuge from everyday life, but a transformational growth center located in the midst of it, offering experiential courses in whatever generates and deepens intimacy, courses uniquely fitting for those entering its domain. Its goal is not transcendence, but full spectrum intimacy, not only with your partner, but also with all that you are — dark and light, high and low, petty and noble, deep and shallow."

The author laments the fact that so many men cannot sustain intimate relationships because of what he calls the "unholy triumvirate" of "unhealthy forms of shame, power and sex." With zest, Masters covers the need for men to deal with the disowned parts of themselves by facing their shadow. He also recommends shifting from aggression to anger and dealing with violence.

By the time he reaches the hot topic of sex, Masters has built a strong foundation that men can stand upon as they plunge through thought-provoking material on freeing your sexuality from the obligation of making you feel better; overcoming eroticitis (an obsessive or compulsive interest in sexual activity); not acting out old hurts through sexual channels; outgrowing pornography; and rethinking penises, breasts, and rape. The author certainly fulfills his goal of making sexuality more conscious, caring, and connected.

In To Be A Man: A Guide to True Masculine Power, Robert Augustus Masters has provided us with a long-needed moral service by reframing our views of manliness and opening the doors to new possibilities for this besieged gender. 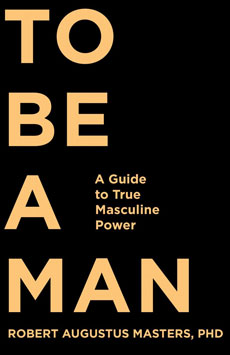