Disposable Futures The Seduction of Violence in the Age of Spectacle

By Brad Evans, Henry A. Giroux
A hard-hitting expose of the many forms of violence rampant in the world today.

In a Nutshell: This profound and timely paperback covers the tragic and disheartening phenomenon of the continuing increase of violence in the world today. It is evident in film and video games where the carnage is appalling; it is revealed in the militarization of the police; it is supported by the trampling on human rights to privacy through widespread surveillance; it is showcased in the great disparities of wealth and poverty; and it is present in the dehumanization policies of ISIS and of those who willing to do anything to win the terror wars.

About the Authors: Brad Evans is senior lecturer in international relations at the School of Sociology, Politics & International Studies (SPAIS), University of Bristol, UK, where he is founder and director of the Histories of Violence Project. Henry A. Giroux is a world-renowned educator, author, and public intellectual. He is the author of many books, including Twilight of the Social and The Violence of Organized Forgetting.

Sum and Substance: Disposable Futures does a good job revealing the violence which manifests itself in all aspects of post-modern life from the obvious brutality and bloodshed of movies (look at the critical acclaim for and box-office success of Kathryn Bigelow's Zero Dark Thirty and Clint Eastwood's American Sniper) to the despicable treatment of the hungry, homeless, unemployed and unemployable people who have been, in the words of Karen Garcia, "kicked when they're already down." It is in the face of this omnipresent violence that the authors herald those who fight for the dignity of all human beings and respect for the environment.

*"It is revealing of the nihilism of our times that forces us to accept that the only world conceivable is the one we are currently forced to endure. A world that is brutally reproduced and forces us to consume its spectacles of violence that demand we accept that all things are ultimately built to be vulnerable. In this suffocating climate, we are indoctrinated to imagine that the best we can hope for is to be connected to some fragile and precarious life support system -- the neoliberal grid of credit, precarious insurance and privilege -- that may be withdrawn from us at any moment."
- Brad Evans and Henry A. Giroux

*"Contemporary neoliberal societies are increasingly defined by their waste. Their productive outputs are complimented by what Zygmunt Bauman identifies as 'waste management' for a social order that has been cultured to obey the planned obsolescence of everything, including people and communities. In a social fabric disordered by market-driven imperatives in which politics are beholden to money and the political is removed from any sense of civic and ethical considerations, there is a strong tendency to view the vast majority of society as a dead weight, disposable just like anything else that gets hauled off and dumped in a landfill."
- Brad Evans and Henry A. Giroux 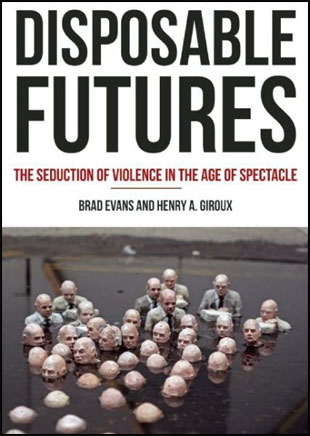