America's Original Sin Racism, White Privilege, and the Bridge to a New America

By Jim Wallis
A passionate plea for churches to move beyond racism to repentance and reconciliation with African-Americans.

Jim Wallis is an author, activist, preacher, teacher, and pastor. He has inspired and convened faith-inspired movements for justice and peace. As the founder and leader of Sojourners, Wallis has been at the forefront of ethical inquiry and cultural criticism. He is the author of ten books including The New York Times bestsellers God's Politics and The Great Awakening.

In this bold and ambitious work, he notes:

"The most controversial sentence I ever wrote was not about abortion, gay marriage, the wars in Vietnam or Iraq, elections, or anything to do with national or church politics. It was a statement about the founding of the United States. Here's the sentence: 'The United States of America was established as a white society, founded on the near genocide of another race and then the enslavement of yet another.' "

Wallis wants Americans to confess their racism and repent. Easier said than done as exemplified by the variety of defensive responses he received to the sentence above. Equally baffling is the author's observation that even people of conscience who care about social justice were not interested in seeing 12 Years a Slave because they thought it would be too intense and troubling for them.

The legacy of oppression of Native Americans was followed by the enslavement of African-Americans and the persecution of Asian Americans. All of these groups still remain marginalized thanks to the pernicious economic inequality of our times. Or as Wallis puts it: Racism is prejudice plus power.

As the nation's most famous and influential evangelical public theologian, the author aims his messages to conservative Christian brothers and sisters who have not applied the anti-racist Biblical texts to the harsh treatment of blacks. Wallis tells his personal story which is one of "walking his talk" while living in ghettoes fighting injustice and working for social change. The heart and soul of this passionate plea for repentance is grounded in a condemnation of white supremacy and entitlement which have been the idols of segregated communities.

Wallis makes a good case for the development of more multiracial congregations and then shares his radical affirmation of reform of the American prison and policing systems and immigration policies.

At the end of the book, he salutes the pioneering work of the late Dr. Vincent Harding who was a historian of the civil rights movement and a practitioner of faith and conscience. Wallis hopes and prays that his spirit may animate his brothers and sisters on the evangelical path. 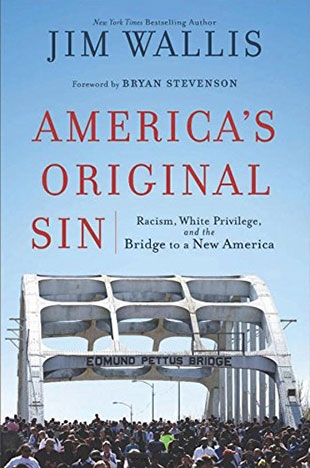