21 Lessons for the 21st Century

By Yuval Noah Harari
A creative book that both asks the big questions and probes the little paths that light the way into the future.

Historian Yuval Noah Harari is the author of two bestsellers: Sapians which focused on the past and Homo Deus which emphasized the future. This wide-ranging, ethical, and creative book speaks directly to those who are anxious about the present situation.

Harari is not frightened or taken aback by the big questions. Here are some of them he mentions in the introduction:

The author uses his historical and philosophical perspectives to shed light on the global dimensions of the problems we are facing, and he gives this tome added value by covering both the personal and the political:

"I want to emphasize the connections between the great revolutions of our era and the internal lives of individuals. For example, terrorism is both a global political problem and an internal psychological mechanism. Terrorism works by pressing the fear button deep in our minds and hijacking the private imaginations of millions of individuals. Similarly, crisis of liberal democracy is played out not just in parliaments and polling stations but also in neurons and synapses."

In dazzling chapters, Harari spells out the dangerous and toxic dimensions of big data which threatens privacy; immigration which reveals the dark side of fearing strangers; war which continues to show the painful consequences of human stupidity; terrorism which seems to growing; and post-truth which show the miseries and messes that can come from fake news.

An antidote to these mistruths, follies, and ego-driven polities is education. Harari agrees with pedagogical experts who argue that schools should switch to teaching the 4 C's: critical thinking, communication, collaboration, and creativity. Schools should downplay technical skills and emphasize general-purpose life skills. Most important of all," writes Harari, "will be the ability to deal with change, learn new things, and preserve your mental balance in unfamiliar situations. In order to keep up with the world of 2050, you will need not merely to invent new ideas and products but above all to reinvent yourself again and again." 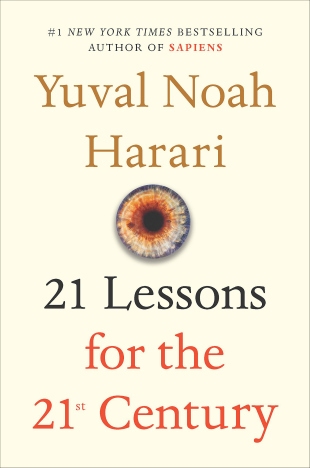