By Melody Moezzi
An invitation to join the author on a mystical and healing journey of love with Rumi.

Why has Rumi, the 13th century poet and Sufi mystic, captivated so many modern women and men? He speaks to the seeker within us; he opens our senses to the wonders of life; he reverences the multiple mysteries of life; and he celebrates the Beloved's grace which embraces us with a love that will not let us go.

Melody Moezzi describes herself as a writer, speaker, activist, commentator, columnist, attorney, and award-winning author. Five years ago, this Iranian-American decided to explore classical Persian poetry. She took as her teacher and guide her father, Ahmad, a physician who had immersed himself in the Sufi poetry of Rumi.

As a youngster, Moezzi was often turned off by her father's obsession, but later in her life, she found that Rumi’s oftentimes wild and crazy verse became "a lifeline" for her as she battled a bipolar disorder, was locked in a psychiatric unit of a hospital, and tried to commit suicide. In this memoir, she describes how Rumi's words became prescriptions for wanting, isolation, haste, depression, distraction, anxiety, anger, fear, disappointment, and pride. She devotes a chapter to each concern.

Here are some snippets of Rumi's prescriptions for modern life. They come from different translators from either Rumi’s Masnavi or his Divan-eh Shams; the citations for each are given at the back of the book.

"You went out in search of gold far and wide,
but all along you were gold on the inside."

"Why seek pilgrimage at some distant shore,
When the Beloved is right next door."

"Quit keeping score if you want to be free.
Love has ejected the referee."

"For a visible cure, pain is the key.
Your injury invites the remedy."

"Every storm the Beloved unfurls
Permits the sea to scatter pearls."

"Ego is the soul's worst affliction
No one lives outside its jurisdiction."

"Quit being a drop. Make yourself an ocean.
Abandon your ego and reap the Beloved's devotion."

While reading The Rumi Prescription, we were reminded of Chasing Rumi by Roger Housden, an enchanting and lyrically written fable which drew us into a circle of love where we could experience afresh the abundant gifts of Rumi's mystical poems. And we found ourselves returning to our Celebration of Rumi put together on the 800th anniversary of his birth.

The closing section of Moezzi's book takes the author, her father, and her mother to Rumi's tomb in Konya, Turkey. It proves to be perfect place for daughter and father to renew their mystical journeys. “My journey,” she writes, “has always been about love, as every prescription here has turned out to be a different incarnation of love and every diagnosis a different incarnation of ego as an obstacle to love. To connect with the Beloved within ourselves and one another, we must learn to love as freely and selflessly as possible.” 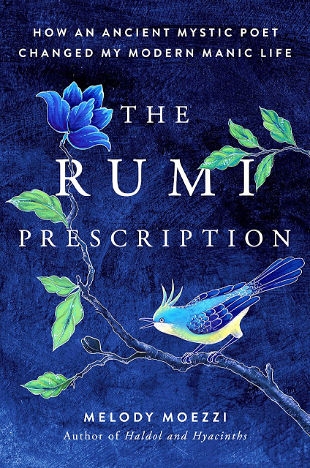