George Gurdjieff was born in the Russian Empire (today’s Armenia) sometime around 1875 and died in 1949 in France. He is the founder of “The Fourth Way,” a harmonization of the study of the human body, emotions, and mind through what he called “The Work.”

There are phrases in this book that may feel foreign if you’re unfamiliar with the teachings of G. I. Gurdjieff, but don’t let that throw you. “The Work” means working on oneself: spiritual practice with real impact in your daily life and perhaps in the world. Cynthia Bourgeault, one of our Living Spiritual Teachers, sets out to explain this in Mystical Courage.

Specifically, Bourgeault brings to a larger audience some aspects of “The Work” that were previously hidden, available only to disciples of Gurdjieff until they were published in a book last year by the Maronite priest and scholar Joseph Azize. (Hence, the slightly complicated subtitle.) Bourgeault, a mystic in the Christian tradition, writes primarily for people of Christian background seeking to wrestle with and learn from Gurdjieff’s practices.

The book began in a series of teachings posted to a private Facebook page and, occasionally, you’ll still see a reference to a “post,” as in a Facebook post, in the text. But, again, don’t let this language throw you. There is so much here that’s useful to people of any faith, or none, who seek to discover or support wisdom in these difficult times.

There are six exercises, each described in detail, with commentary from Bourgeault. Each exercise, as part of “The Fourth Way,” involves a prod to our usual sedentary ways of spiritual practice such as personal prayer and sitting meditation. As Bourgeault explains, “In the absence of a vibrant, awakened presence in our physical body, we default to thinking without even knowing we are doing it. Then everything becomes a projection of the story inside our heads.”

The fifth exercise, “The Web Exercise,” does not refer to the Internet but to a web of people and what they can do together. It stands out from the others as being accomplished by a group. As Bourgeault explains: “A web is underutilized if we only use it to shore up our personal sense of safety and connectedness within our immediate group. It can more powerfully be used to offer direct transfusions of hope, courage, compassion, and resilience to an entire planet grown dark and mineral for want of these things. It can begin to warm the atmosphere in the inner ground, so that new movement in the outer ground becomes possible.”

Bourgeault notes the similarities and dissimilarities between Gurdjieff’s teaching and the Christian mystical tradition when she teaches about “Lord Have Mercy” and “The Jesus Prayer.” Gurdjieff was deeply familiar with Eastern Orthodoxy, in particular. She writes:

“For Gurdjieff, Jesus is definitely one of the highest attained sacred individuals sent to offer aid, but he is on the order of other such cosmic helpers and messengers (like Buddha and Muhammed) — not an ontological singularity. Jesus is a finger pointing at the moon; rather than looking directly at Jesus, Gurdjieff looks in the same direction as Jesus and sees what Jesus sees: the broken heart and deep sorrow of “our common Father” as He continuously takes into His own heart the anguish and fracturedness which is the shadow side of all manifestation.”

The excerpt accompanying this review demonstrates the multifaith approach of both Gurdjieff and Bourgeault, with an example of how this can work in your body from exercise number six. 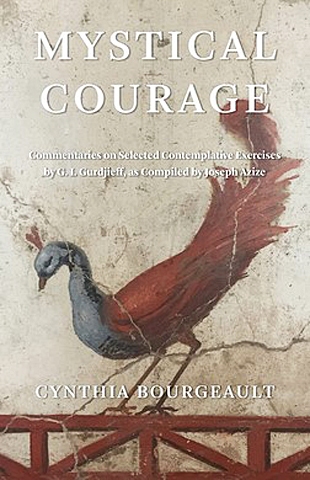