By Thomas Moore
A stirring and sumptuous work of creativity and insight into the present situation which calls for a personal religion.

Thomas Moore is the author of 13 books including Care of the Soul. We've admired and recommended many of his books over the years, as you'll see from a visit to his profile in the Living Spiritual Teachers Project.

As a young man, Moore lived as a monk for 12 years. He has been a musician, a university professor, and a psychotherapist, and today he lectures widely on holistic medicine, spirituality, psychotherapy, and the arts. He has a PhD in religion from Syracuse University and has won numerous awards for his work. He writes regular columns for a variety of publications.

In the opening pages of this revved-up and forward-looking work, Moore calls himself a "religious humanist" who believes in a strong secular life, a deep spiritual outlook, and an active spiritual practice. What he remembers most fondly from his Catholic upbringing is the smell of beeswax candles and smoky incense. To him, the pleasures of the senses are more important than dogma or doctrine.

Although convinced that traditional religion needs an overhaul, Moore prefers the word "religion" over "spiritual." On the pages of this bold volume, he challenges both spiritual seekers and traditional religious folk to create their own personal religion grounded in "an intelligent, openhearted approach to life."

In Moore's vision of a religion of one's own, everything is sacred and nothing is excluded from the heart. The understanding of community will be much more expansive than a traditional congregation and will include nature, animals, and even inanimate things. Further, we can affirm both the transports of mysticism and the pleasures of sexual intimacy in our personal religions. And, last but not least, we will contribute to the mending of the world and seek to be peacemakers and healers in our homes and neighborhoods. If you believe that personal religion can "be as real as the Vatican and as holy as the Dalai Lama," then you will be as excited as we are to consider all the possibilities.

Four out of five people in the world are affiliated with an organized religion and a growing number of them feel a yearning to become more spiritual. Even atheists and agnostics can appreciate the bounties of beauty and the wisdom of ancient religious teachings and rituals. Moore lists his own favorite guides and resources as the Tao Te Ching, the Gospels, stories of the Greek gods and goddesses, teachings of the Zen masters, Native American epic songs and tales, and the writings of the New England transcendentalists. His soul has been stirred by the plays of Samuel Beckett; the poems of Rainer Maria Rilke, Emily Dickinson, and Jane Hirshfield; and the writings of C. G. Jung and Paul Tillich.

Moore celebrates spiritual reading as a practice and goes on to share the things he has learned from the Christian gospels, the Sufi poets, Saint Francis, and the Jewish Kabbalistic tree. He appreciates what he calls the mutuality and conviviality of these spiritual traditions which have a great deal in common yet can be adapted to meet the individualistic and often eccentric contours of one's personal situation and experience.

As a student of the many quests for meaning, both sacred and secular, Moore is an advocate of mysticism and in a fine and flowing section of the book pays tribute to Christian mystic Simone Weil, Zen master Shunryu Suzuki, pianist Glenn Gould, religion historian Karen Armstrong, astronaut Edgar Mitchell, religion scholar Karoly Kerenyi, artist Georgia O'Keeffe, Trappist monk Thomas Merton, theologian Pierre Teilhard de Chardin, and psychologist James Hillman. This idiosyncratic group illustrates the mix of perspectives that can be gathered together as each of us does the exciting work of curating readings, spiritual teachers, and resources for our day-to-day living.

With great versatility and elan, Moore also reveals the value of dream practice, therapy at home, making room for the carnal spirit, seeing the spiritual and the secular as two sides of the same coin, and deriving spiritual fortitude from muses, angels and daimons. As we've seen in his earlier books, he is especially poetic describing how art can become a spiritual path. In these wide-ranging and thought-provoking chapters, Moore reveals the depth dimensions of a well-developed and rounded personal religion that is constantly opening new doors and exploring fresh options.

In the closing chapters, Moore shares his thoughts about intuition, magic, soul and spirit as antidotes to the stress, aggression, and the purposelessness afoot in our culture. The problems in our culture and world, he suggests, are the result of weakened formal religions with their emphasis on fundamentalism, ethical disarray, meaningless rituals, and general irrelevancy. He notes:

"What I am envisioning is a return to a sacred environment and a sacred sense of self. A divided world has rendered secularity a source of insanity and aggression, and it has made religion vapid and unhelpful or fanatic and dangerous. So this new kind of religion reinstates both secularity and sacredness, one deepening the other in a fruitful tandem. We need to enjoy secular life, and we need a sense of the sacred for depth of sensitivity and meaning."

We can still remember the afternoon 20 years ago when Fred first read Thomas Moore's Care of the Soul. There were so many exclamations of "Yes!" coming out of his office that Mary Ann inquired, "What on earth are you reading?" Fred replied, "A book I've been waiting for for a very long time." Although Moore has published many books about soul in the interim, this new one strikes us as the real sequel to that first one — it details how we can truly care for our souls by crafting our own religion out of our personal inspiration and community experiences, identifying a meaningful set of principles and choosing practices that express our longings and commitments.

Moore has marshaled all the wisdom and imaginative insights he has accrued over the years and put them together in a sumptuous and soul-stirring description of an openhearted and flexible path for all of us — young and old, religious and spiritually independent. Here at last is a substantive book that respects the riches of religion, spirituality, and secularity and equips the saints (that would be us) to embrace all the wild possibilities as we head out into the new territories ahead.

Thomas Moore will be leading a new one-month e-course for Spirituality & Practice beginning February 3 in which he will take us through the process of crafting our own religion. Emails delivered three times a week will explore key steps with short essays, following by tasks and practices to help you personalize your religion. Participants will also be able to interact with Moore in the online Practice Circle and during a one-hour teleconference. To read more about this e-course and to sign up, go here:
www.SpiritualityandPractice.com/CraftingYourOwnReligion 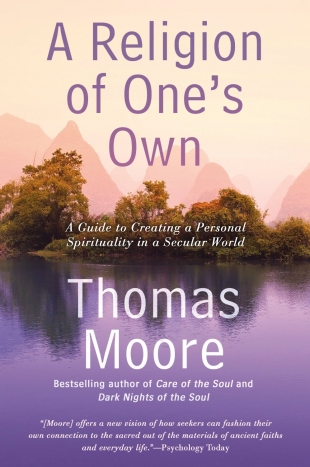