Beloved Buddhist teacher Thich Nhat Hanh, who reached across the world and to people of all religious traditions, died on January 22, 2022. The International Plum Village released this statement about his passing:

"International Plum Village Community of Engaged Buddhism announces that our beloved teacher Thich Nhat Hanh has passed away peacefully at Từ Hiếu Temple in Huế, Vietnam, at 00:00hrs on 22nd January, 2022, at the age of 95. We invite our global spiritual family to take a few moments to be still, to come back to our mindful breathing, as we together hold Thay in our hearts in peace and loving gratitude for all he has offered the world. More official news will be coming shortly. Please sign up for email updates here: https://bit.ly/3fJx7pd"

We in the Spirituality & Practice team have been deeply influenced by Thich Nhat Hanh over the years and have reviewed more than 60 of his books. His poem "Please Call Me by My True Names" became the model for some of our own "I Am" prayers. His life was a blessing to us and to so many around the world. May he rest in the peace that he encouraged us to seek and be.

Thay (teacher in Vietnamese), as his friends and students call him, was a world-renowned writer, spiritual leader, scholar, poet, peace activist, and Buddhist monk. He was born in Vietnam in 1926 and became a monk at the age of sixteen. After founding a Buddhist learning center in South Vietnam, he came to the United States in the 1960s to study and teach. However, during the Vietnam War, he returned to his homeland and become a pioneer of "engaged Buddhism," which melds meditative practices with active nonviolent civil disobedience. He founded a peace magazine, worked unstintingly for reconciliation between North and South Vietnam, lobbied world leaders to put an end to the conflict, set up relief organizations to rebuild destroyed villages, and started the School of Youth for Social Service. These incredible good works inspired Martin Luther King, Jr., to nominate him for the Nobel Peace Prize in 1967.

When he was 40, Thich Nhat Hanh was banned from Vietnam by both the non-Communist and Communist governments for his role in undermining the war effort and speaking out against the violence that was destroying the lives and liberties of his people. Into the 1970s, he was still involved with rescue missions for Vietnamese trying to escape political oppression. He led a Buddhist delegation to the Paris peace talks that helped establish a new relationship between Vietnam and the United States.

In 1982, he founded Plum Village in southwestern France, a Buddhist retreat center and monastic community where he taught the art of mindful living and trained a new generation of teachers. He conducted retreats around the world for American Vietnam War veterans, psychotherapists, artists, environmental activists, and children. During visits to the United States, he taught, wrote, gardened, and worked help refugees worldwide at Green Mountain Dharma Center in Vermont and Deer Park Monastery in Escondido, California.

There is a simple elegance to the spiritual teachings of Thich Nhat Hanh that shines through every one of his books. He gracefully conveys the beauty of essential Buddhist teachings. He is a master of the art of mindful living and staying in the present moment. His practice of engaged Buddhism has led to the transformation of many people’s consciousness, and his writings on dealing with anger and violence are very concrete, recommending specific practices to undertake in our families and communities. Another of his core teachings — being peace in this conflicted world — has led many to new respect for their enemies and a firmer resolve to bring about reconciliation in our tattered world.

Our practice of everyday spirituality has been enriched by the use of Thich Nhat Hanh's gathas — mindfulness verses said during daily activities, such as when opening a window, brushing your teeth, hearing a bell, washing the dishes, and throwing out the garbage. Thousands have followed his instructions for walking meditation and found it a way of connecting to the Earth and their neighbors. Thich Nhat Hanh spoke to people of all religious backgrounds and was a bridge builder in interfaith encounters. 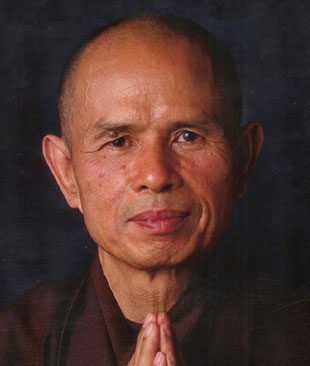