Directed by Edward Zwick
An important film which opens our eyes to the bloody brutality of civil war, corporate malfeasance, and the training of child soldiers.

If you were morally caught up in Syriana and Hotel Rwanda, this is another movie that you won't want to miss. Edward Zwick is a director who is not afraid to take risks and do stories that challenge us to take another look at the ethical choices we make in our lives. Blood Diamond is set in 1999 in Sierra Leone where a fierce civil war has killed thousands of innocent civilians and driven more than a million people out of their homes and villages and into refugee camps. In an interview, Zwick has said:

"To me this movie is about what is valuable. To one person it might be a stone; to someone else, a story in a magazine; to another, it is a child. The juxtaposition of one man obsessed with finding a valuable diamond with another man risking his life to find his son is the beating heart of this film."

Solomon Vandy (Djimon Hounsou) is a fisherman in a quiet village in Sierra Leone. He has a wife, a baby daughter, a daughter, and a son, Dia (Kagiso Kuypers). He is especially proud of the boy, who at 12 is a good student who dreams of becoming a doctor. But all that is changed when the heavily armed rebels who are fighting Sierra Leone's government troops roll into town and slaughter men, women, and children as if they were exterminating rodents. Solomon's family escapes death but soon after Dia is taken away to be trained as a child soldier with the rebels.

Solomon is captured and forced to work in a camp mining diamonds. The money the rebels get for the diamonds is used to buy the arms they need to carry on the war. One day the fisherman discovers a large pink diamond and manages to bury it before it is discovered by Captain Poison (David Harewood). This amoral rebel solider is later put in charge of turning the young boys into vicious killers. He singles out Dia and after he makes him shoot somebody, appoints him a captain of boys with nicknames like "Baby Killer," "Born Trouble," "See Me No More." He justifies his actions by saying, "You think I am a devil, but that's only because I have lived in hell. I want out."

Another African who wants out is Danny Archer (Leonardo DiCaprio), a Rhodesian smugger and ex-mercenary who learns about the pink diamond when he is in prison. He believes this gem holds the key to his own exit from Africa. A cynical soldier of fortune who has seen it all, he convinces Solomon that the only way he can locate and save his family is to sell the diamond. These two very different Africans face a formidable challenge in getting around during the civil war.

Maddy Bowen (Jennifer Connelly), an American journalist and adrenalin junkie who has covered wars in Bosnia and Afghanistan, wants to do a story about "conflict stones" or "blood diamonds" — Sierra Leone gems smuggled into Liberia and then sold around the West by reputable firms. It's been estimated that 15% of the world's diamond market consists of conflict stones. She thinks that with Archer's assistance she can gather the facts and expose the corporate malfeasance behind the traffic in diamonds. He in turn needs her connections to help convince Solomon to lead them to the pink diamond.

Archer and Maddy are attracted to each other but have very different perspectives. She is an idealist who wants to expose corruption; she's convinced that people wouldn't buy a ring if they knew it meant someone losing a hand. He is a cynic who believes that everyone is using everyone else so looking out for number one is the only way; besides, in Africa people killing each other has become a way of life. On his journey to locate the diamond with Solomon, Archer's eyes are opened to some enduring values that transcend his own self-interest.

Zwick keeps the action moving in this quest drama that includes many clashes between the rebels and the government forces that viscerally depict the collateral damage of war. The screenplay by Charles Leavitt zeroes in on several important subjects that have not been dealt with in other feature films. The first is the violation of the souls of children like Dia who are taken from their families and put in training camps where they are brainwashed to become merciless killers held in check by drugs, liquor, and the idea of their own power over others. In the film, Solomon risks all to find his son. He meets Benjamin (Basil Wallace), a dedicated teacher who runs a school for the many victims of war, including child soldiers who need a place where they can heal and begin their lives again. A note at the end of Blood Diamond states: "At last report, there are an estimated 400,000 child soldiers in the world today."

Second, the screenplay also does a good job pointing out the moral culpability of rich and powerful global diamond companies that make a profit on the labors of poor Africans and the natural resources of their countries, and then look the other way when they know that the money from the sale of the diamonds is funding the arms used in African wars. In an interview in an Amnesty International publication, Edward Zwick said:

"Americans purchased nearly $38 billion worth of diamonds last year, accounting for more than half of global sales. I have nothing against diamonds (or rubies or emeralds or sapphires). I do object when their acquisition is complicit in the debasement of children or the destruction of a country. I find it unconscionable that the resources of the developing world are exploited for the sake of our vanity, and, above all, that billions of dollars of corporate profit are built on the backs of workers who are paid $1 a day."

Early in the film, we learn a sobering truth about Africa's plight. "When a substance is found, the locals die." It was true at the height of the ivory trade. It's true in the Congo now where sales of gold and coltan (used in cell phones) are fueling the conflict. It threatens to be true in the Ivory Coast. And the Bushmen, who lived like their ancestors as hunter-gatherers in the Kalahari desert, are now living in relocation camps after diamonds were discovered on their traditional lands. Blood Diamond is as important as any of the films we've seen over the years about the Holocaust. It shares with them the vital message: "We must not let this happen again."

Special DVD features include a commentary by director Edward Zwick. 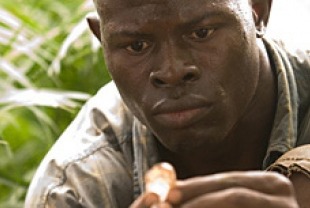 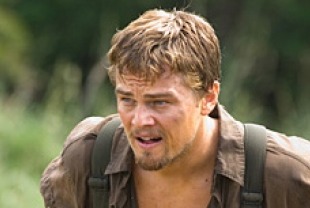 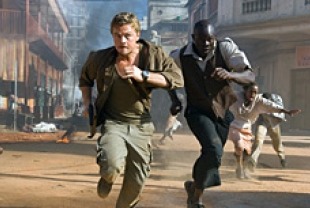 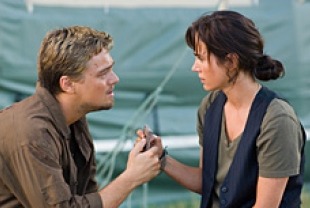 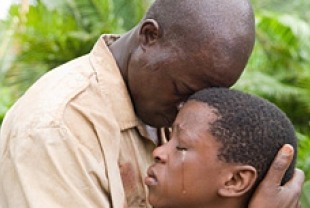