Directed by Atiq Rahimi
An astonishing film about an Afghan woman's close-encounter with sex, power, and female desire.

"What would happen if one woman told the truth about her life? The world would split open."
— Murial Rukeyser

A woman (Golshifteh Farahani) lives with her two young daughters "somewhere in Afghanistan or elsewhere." Their poverty stricken neighborhood has become the front line in a civil war, and her husband (Hamid Djavadan) lies paralyzed in a coma in their meager apartment. He was shot in the neck defending the honor of his mother. His wife feeds him water through a tube, holds his hand, soothes his feverish brow, and dutifully says her prayers as a good Muslim. The imam visits as often as he can to check on the condition of her husband. But with bombs often exploding nearby, she and her daughters must scramble down into underground shelters with their neighbors for safety.

While caring for her husband, the woman pours out her heart to his still and silent body, recalling the pain and suffering she has endured in her ten years of marriage to this much older man beginning when she was only 17 years old. In these stream-of-consciousness monologues, she expresses a variety of emotions including fear, anger, regret, and dismay over her current plight. She describes him as an insensitive and abusive man more at home with men than with her. She resents his obsession with war and his desire to be a hero.

The Patience Stone is based on the Afghan-born, France-based writer Aliq Rahimi's 2008 novel of the same name which won France's most prestigious literary prize, the Prix Goncourt. The title is taken from a legend about a magical black stone, a patience stone, which absorbs the stories of those who confide in it. The stone, after hearing its fill of hardship and pain, explodes. As the woman revisits the past, it becomes clear to her how oppressed she has been with a father who arranged her marriage to a man she had never met; a husband who mistreated her; and his brothers who refuse to help her deal with her present situation.

In the last section of The Patience Stone, the woman talks about her unexplored sexual desires and then acts on them. She recalls being raped by her husband and treated like vermin by him when she was menstruating. Now in his paralyzed state, she fondles his genitals and shocks herself by treating him like an object after years of serving his needs and not her own. She then begins a relationship with a stuttering young soldier (Massi Mrowat) and tutors him in the art of making love. He responds with gifts to her and a tenderness that soothes her heart. The woman's wise aunt (Hassina Burgan), a prostitute, affirms her transformations and sees them as the pathway to a more liberated and fulfilled life.

The dramatic finale to The Patience Stone must be seen to be believed. Three cheers for Golshifteh Farahani's astonishing performance in the lead role of the oppressed Afghan wife who wins our empathy with the truth of her confession and the daring of her sexual expression.

Special features on the DVD include the making of The Patience Stone. 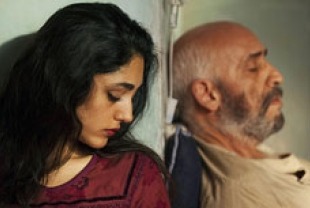 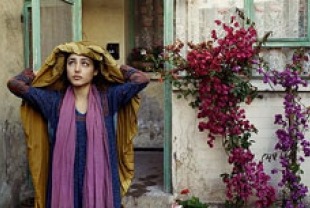 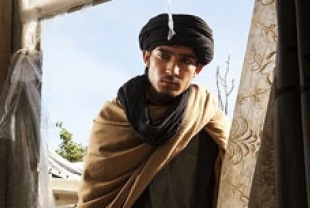 Interview with Atiq Rahimi, author and director of The Patience Stone