Directed by Ridley Scott
A science fiction gem that includes a tribute to the importance of little things like duct tape.

A team of NASA astronauts are collecting soil samples on the planet Mars when a fierce windstorm sends them fleeing to their spaceship. Mark Watney (Matt Damon) is hit by some flying metal debris and falls out of sight. With their ship about to be blown over, Melissa Lewis (Jessica Chastain), the commander, feels the pressure to take off. Believing Mark is dead, they blast off, abandoning their Mars base and heading back to Earth. There, the head of NASA ( Jeff Daniels) reports the loss of this seasoned and well-liked astronaut. Meanwhile, 50 million miles away, Mark wakes up to find himself all alone. 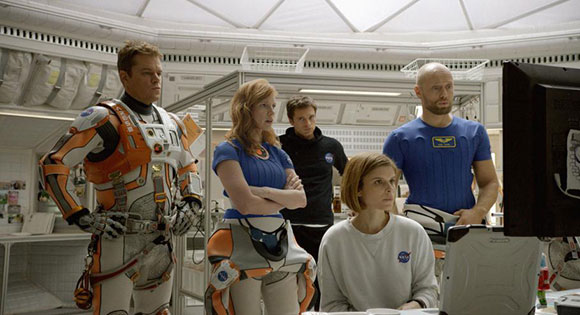 The Martian is based on a bestselling science fiction tale written by Andy Weir with a creative and credible screenplay by Drew Goddard. The unfolding of events swings back and forth between Watney's struggle to stay alive and NASA's strategizing to devise a plan to rescue him and bring him home.

Watney's first challenge is to take care of a wound in his abdomen sustained during the wind storm. Then he tackles one problem after another. A botanist, he figures out how to combine his own waste with Martian soil and grow potatoes to supplement the meager supplies left in his Habitat module. He improvises a way to make more water. He is eventually able to communicate with NASA using parts from a rover left behind during a prior mission. 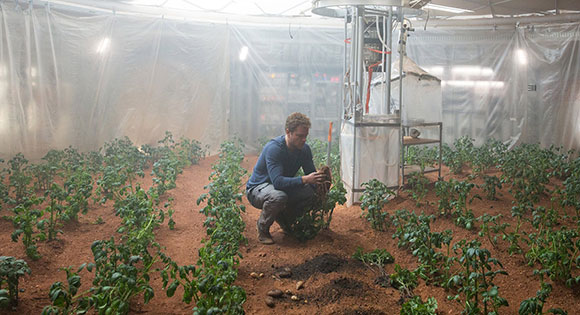 One of the most important parts of his death-defying strategies is keeping a daily video recording of his projects and feelings. This provides a deep and meaningful connection between the film audience and this talented scientist who overcomes many obstacles with his can-do resiliency and perseverance. Speaking of the assistance he is getting from Houston, the stranded astronaut says: "Luckily, I have the greatest minds on the planet helping me."

He is right about that. Veteran director Ridley Scott films several spacecraft liftoffs but is even more successful in delivering the emotional liftoff in our hearts as we witness the concerted efforts of NASA, the daring mission of Watney's crew, and a co-operative venture with the Chinese space program. 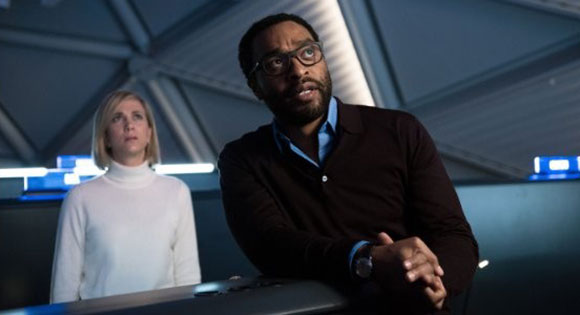 Scott also once again proves himself to be a masterful director of actors. Among those who deserve to be singled-out are Jeff Daniels as the NASA chief, Chiwetel Ejiofor as the director of Mars Missions, Kristen Wiig as NASA's public relations director, Sean Bean as flight director, Benedict Wong as a technical wizard, and Donald Glover as a scientist who comes up with an out-of-the-box idea for rescuing Watney.

Matt Damon's exhilarating performance draws out our empathy and tutors us in the art of hope. Although this astronaut undergoes feelings of anger, disappointment, loneliness, and depression, he is able to keep his sense of humor and acknowledge all the little things that contribute to his living through repeated life-threatening ordeals. For example, duct tape conveniently kept on the outside of his space suit plays a significant role in his survival. As countless spiritual teachers have conveyed to us, the way of little things is the path to a transformed life. 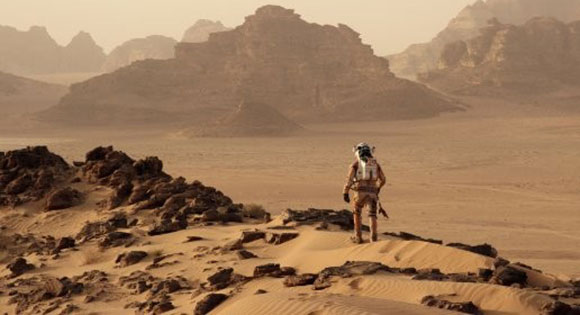