Directed by Michael Collins
A profound and hopeful documentary about the challenges faced by soldiers returning from war.

Think of all the young men and women who chose to serve in the United States military. Many of them were too callow to realize what they were going to face in the heat of battle. Generation after generation has been brainwashed with the mythology of war, the hatred of the enemy, and the nobility of laying down one's life for patriotic ideals.

We have witnessed many poignant antiwar films and seen the damage done to the hearts, minds, and souls of soldiers. The horror of combat and the exposure to rampant death has led to psychic trauma and intense suffering. During the Civil War, it was called "soldier's heart"; during World War 1, it was labeled "shell shock"; in our times, it is known as "PTSD" (Post-Traumatic Stress Disorder).

"Veterans are the light at the tip of the candle, illuminating the way for the whole nation."

Almost Sunrise is a profound and prophetic documentary directed with great sensitivity and compassion by Michael Collins. It zeroes in on two veterans and their search for healing and release from the nightmares of war. The film follows them on a 2,700-mile walk during which these two married men talk about the plight of poorly treated soldiers who have returned from battle only to face bureaucratic snafus, depression, and only sporadic treatment of their invisible war wounds. Collins is troubled by the disturbing fact that 22 veterans are committing suicide every day. That is tantamount to an epidemic!

Tom Voss and Anthony Anderson suffer from PTSD, experiencing depression and daily flashbacks to their grim encounters with death and destruction in combat. Their very worried wives are stunned by their husbands' anger, detachment, and emotional lockdown. These two warriors also share what health professionals call "moral injury" — the transgression of deeply held beliefs during wartime. They carry within them a corrosive toxin of guilt and an inability to forgive themselves for the deaths of civilians and others referred to in cold-hearted military language as "collateral damage." 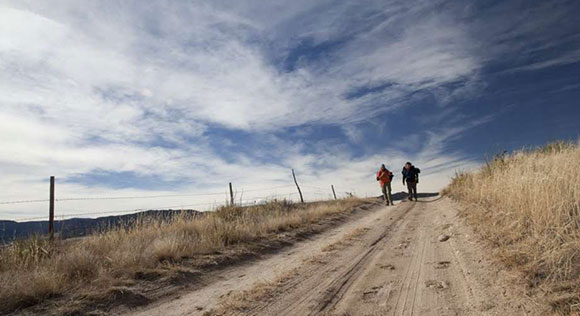 Although there already been valid criticism of the treatment of returning veterans, Almost Sunrise takes us into uncharted territory with its hopeful, helpful, and positive search for solutions to the problems and challenges faced by veterans with PTSD. We watch as Tom and Anthony discover that awesome encounters with the vastness and beauty of the natural world are healing and transformative for them. While Anthony squares off with his demon of anger, Tom is emboldened by talks with Father Thomas Keating about the need to forgive himself for all the moral injuries he inflicted on others during his wartime experiences. We also witness soldiers at retreat centers and other educational places using visualization and meditation as paths to wholeness.

Collins and company are to be commended for this rounded and inspiring presentation of wholistic healing resources for the minds, bodies, and souls of traumatized veterans. And as Zen master Thich Nhat Hanh has put it, veterans offer light to nations that refuse to acknowledge the shadow elements of their past dark and destructive deeds in wartime.

Finally, we want to praise the natural and engaging ways in which Collins has shown us ordinary citizens offering their support to Tom and Anthony as they make their spiritual pilgrimage across America.