Directed by Brett Morgen
A soul-stirring cinematic tribute to Jane Goodall and her reverence for chimpanzees.

Imagine a beautiful blonde-haired young woman kneeling in the jungle, totally immersed in her chance to look at a group of wild chimpanzees in the Tanzanian forest. Kenyan-born paleontologist Louis Leakey has chosen Jane Goodall, a 26–year old secretary with no scientific training to conduct research for his behavioral study of apes in relation to early hominids. It's a great choice. She has dreamed since childhood of going to Africa, living with animals, and writing about her experiences. 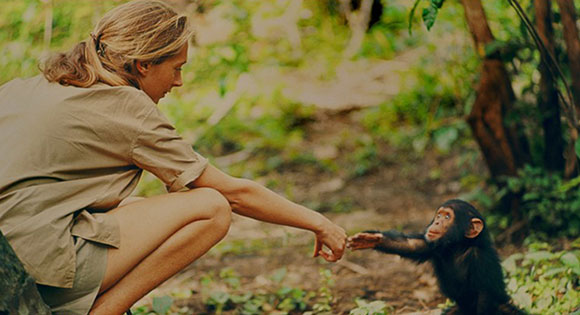 Jane brings to this pioneering mission an open mind, a passion for knowledge, a love of animals, and monumental patience. We see her trek each day through the forest at Gombe to gaze upon these creatures with reverence and gratitude. At first, the chimpanzees run away from her, but over time they allow her to be in their midst.

Jane's first major scientific breakthrough comes when she observes that Greybeard, the senior male of the community, is using a stick to get termites to eat out of a mound. She then sees that the chimps deliberately make twig tools for this task. Up until this discovery by Jane, it was assumed that only humans as superior animals were smart and creative enough to create tools to make chores easier. Later observations revealed the chimpanzees had a capacity for violence and making war — a trait they share in common with humans. At one point, she says, "The more I learned the more I realized how much like us they were." 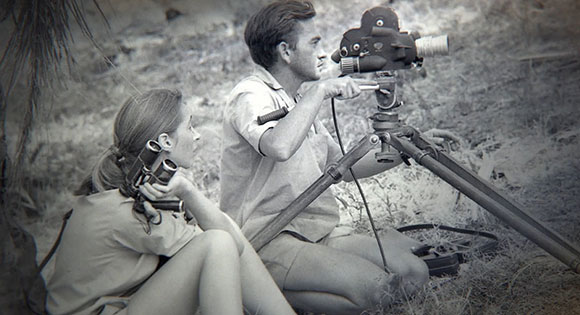 The media attention given by this adventure enables Leakey to secure a grant from the National Geographic to fund Goodall's work. Although helped by her mother for a while, Jane savors her solitude in the mountains. Then her sponsors send a Dutch nature filmmaker, Hugo van Lavick, to photograph her companionship with the chimpanzees. Jane and Hugo get along well and eventually marry. The arrival of a son, named Grub, affects her field work. When his funding for Gombe is cut off, he goes off to film the wildlife on the Serengeti. The couple drifts apart and eventually divorce.

Director Brett Morgen amplifies this profile documentary with a present-day interview with Goodall who now travels widely talking about the future of the chimpanzees and other wild animals and the dangers of environmental degradation. Of the two million chimpanzees at the turn of the century, only 220,000 are left today. Goodall believes that the only way to save these animals is to restore their habitat. 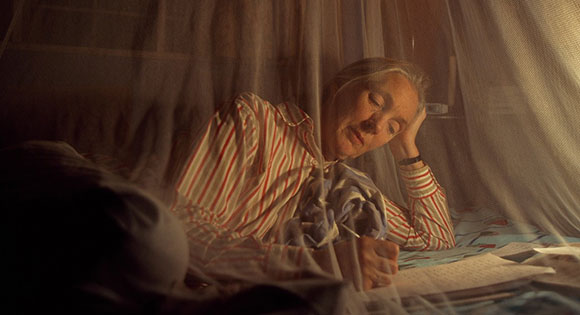 Jane contains remarkable coverage of the African wilderness and its incredible diversity of animals. This documentary came into being when over 100 hours of 16mm archival footage shot by Hugo van Lavick of Goodall in Gombe, thought to be lost, was discovered in 2014 and edited. The other technical achievement is the soul-stirring music by Philip Glass which carries the enchanting beauties and bounties of Jane into our hearts, minds, and souls.