Directed by Fernando Meirelles
An enlightening drama about the humanity and differing visions for the church of Pope Benedict and Pope Francis.

The Pope of the Roman Catholic Church is the most well-known and influential religious leader in the world. When he visits other countries, political dignitaries, governmental officials, and the media all want to meet with him. It has been this way since Roman Emperor Constantine legalized Christianity in the fourth century.

Within the Catholic Church, the Pope has traditionally been considered to be the infallible supreme authority on matters of doctrine. Some believers have become convinced that there are limits to canonical law, and that even long-established dogmas can be questioned and even changed. The Two Popes brings us portraits of two men on opposite sides of this debate.

Pope Benedict XVI (2005 – 2013), originally from Germany, was known for his conservative theological views and his campaign to rid the church of anyone not following traditional doctrine and practices. Pope Francis (2013 to the present), the first non-European Pope for 1,300 years, has championed progressive views and causes, especially on behalf of the poor.

This is an masterful drama directed by Fernando Merilles (City of God, The Constant Gardener) from a screenplay by Anthony McCarten (Darkest Hour, Bohemian Rhapsody). At the outset, we learn that this two-hour look at the intense and world-impacting conversations between two Popes is "inspired by true events." 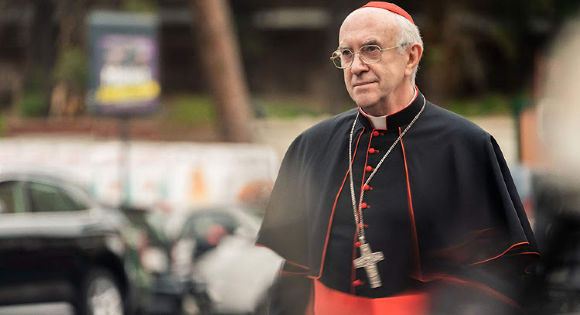 We meet Cardinal Jorge Bergoglio (Jonathan Pryce) as he is preaching in a poverty-stricken area of Buenos Aires and then catch up with him in Vatican City in 2005 where 115 cardinals have gathered to elect a new Pope after the death of John Paul II. Although the Argentinian has some support among the more liberal cardinals, the enclave chooses Cardinal Joseph Ratzinger (Anthony Hopkins), who takes the name Pope Benedict XVI. The two churchmen could not be further apart in their theology and personal style.

This becomes very apparent when Bergoglio travels to the Vatican in 2012 to get Pope Benedict's permission to retire. At the Pope's summer home, they walk the gardens and discuss their very different views on the purpose and practice of the Church. Benedict argues that God does not change, and neither should the church. Bergoglio counters that God does change by moving toward us. As they continue to debate, Benedict declares, "I disagree with everything you say." Their discussions continue in Rome, where they meet in the Sistine Chapel. 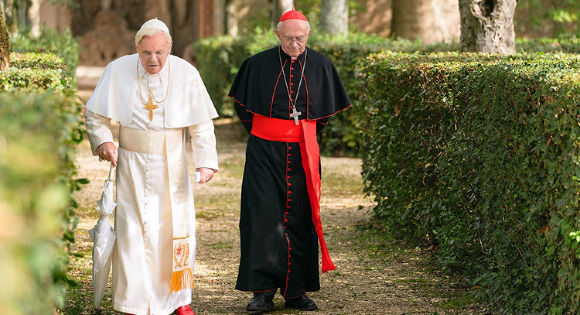 The Pope cherishes his role as the voice of tradition, whereas Bergoglio reveals himself to be an advocate of social reform and service of the poor. At one point, he declares, "Mercy is not reserved for the virtuous; it is dynamite that tears down walls." To which, Benedict snaps back, "You have an answer for everything. You are too clever."

The two are also world's apart in their personalities. Benedict spends a lot of time alone, even eating by himself at every meal. Bergoglio is humble and outgoing, riding in front with his driver, carrying his own luggage, befriending the gardener and one of the Vatican guards, and even going out to a bar to watch a soccer game. Still, convinced that if Bergoglio were to retire, it would be seen as a protest, Benedict refuses to agree to his request.

What becomes clear from their fascinating dialogue is that both men feel they are in need of the forgiveness of people and the mercy of God. Bergoglio is haunted by his years as the head of the Jesuits in Argentina in the 1970s and 1980s when he was not able to protect his priests from the military junta; two close friends were arrested and tortured, and one never forgave him. 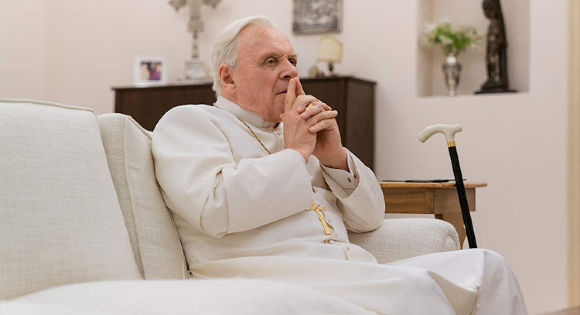 Benedict talks about his own dark night of the soul, aware that he is not liked and perceived very differently than Bergoglio. At one point, he says, "This popularity of yours – is there a trick to it?" He confesses that he is having a hard time hearing God's voice and is full of doubts. He surprises Bergoglio by announcing that he will resign from the papacy. The film then goes on to cover Bergoglio's selection as the next pope; he takes the name Francis. 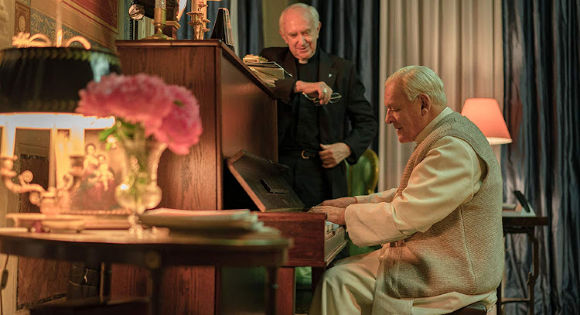 Pryce and Hopkins truly inhabit these roles, creating convincing multifaceted portraits of the two very different men. The miracle is that the audience can empathize with both of them. Without losing respect for the holy roles the Pope must play, the director focuses on their humanity. We see them open up to each other and share little pleasures of life, even trading jokes (Bergoglio's is funnier than Benedict's). Pope Benedict plays the piano for his guest and talks about his favorite television program about a mystery-solving German Shepherd dog. Pope Francis loves the music of Abba and the Beatles, and he's a huge soccer fan. Best of all, he's still dancing. The scene of him teaching Benedict to tango will have you smiling from ear to ear!