Waiting for the Barbarians

Directed by Ciro Guerra
A powerful drama about the toxins spread by rumors of war.

J. M. Coetzee is a South African writer who was awarded the Nobel Prize in Literature in 2003; the committee called his allegorical story Waiting for the Barbarians "a political thriller in the tradition of Joseph Conrad." Penguin Books included the novel in its series "Great Books of the 20th Century." It was adapted as an opera by Philip Glass with a libretto by Christopher Hampton. And in 2012, the Baxter Theatre in Cape Town presented Alexandre Marine's stage adaptation of the novel. Coetzee took the title of his novel from a poem by the Greek poet Constantine P. Cavafy.

"War starts in the mind, not in the body. . . .
Though war can cause anger and grief, or be fueled by these emotions, war is not a feeling. Nor, though war is aggressive, is it an impulse."
-- from Susan Griffin's "The Mind Can Be a Prison or a Door"

The protagonist and narrator of this highly praised drama is a nameless Magistrate (Mark Rylance) in a frontier community owned and developed by a proud and powerful Empire. He is a very thoughtful and pensive man with a highly developed conscience and ethical sense. He is respectful of the people he serves and works with. His hobby is venturing out into the desert to collect pieces of pottery from some ancient civilization. 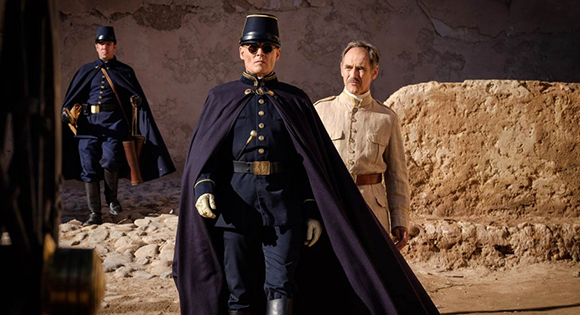 The Magistrate's slow-paced and repetitive life is turned upside down when Colonel Joll (Johnny Depp) arrives at the fort. He takes seriously the rumors of war which have been circulating among the people. Joll believes the nomadic tribes who live in the desert, called the Barbarians, pose a threat to the Empire. Not much is known about them and, as a result, these indigenous people have been classified as the major enemy who must be eradicated.

Truth is the Sound of Suffering

This engrossing allegory was written by Coetzee during the South African period of vicious apartheid when violence was regularly used as an instrument of cruelty against blacks. The behavior it documents, however, is not limited to that time or place, as we've seen in Iraq, Afghanistan, and the "black sites" of the War on Terror.

Colonel Joll with his arrogance and disdain for the poor or "the stranger" begins a campaign against the Barbarians by torturing several prisoners and having another killed. The Magistrate asks him whether it is necessary to go so far and the response is, "A certain tone enters the voice of a man who is telling the truth. Training and experience teach us to recognize that tone." But the Magistrate realizes that for this amoral man, "truth" is the sound of suffering. The clash between the magistrate and Toll escalates as time goes on. 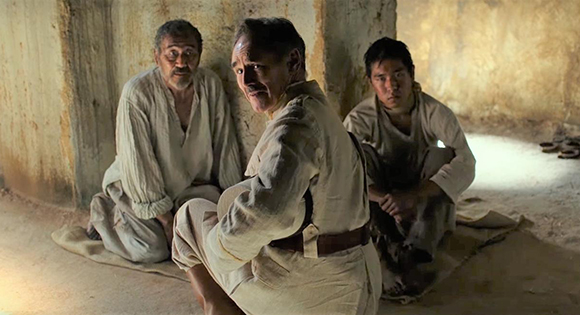 Life shifts again when the Magistrate, a lonely and single man, rescues and then nurses back to health a young nomad woman (Gana Bayarsaikhan) who has been maimed and blinded by Joll's soldiers. After realizing that his obsession with her is not based on respect, he decides to return her to her desert tribe. It is a long and painful journey for the magistrate and in many ways even more traumatic than his dealings with the bone-chilling authoritarian, Officer Mandel (Robert Pattinson) who replaces Joll and proves to be a monster-in-the-making.

"War arises from unfounded ideas and distorted perceptions aided by lies and silence.
Very few wars have been judged as necessary for self-defense. . . .
War is not inevitable. The only thing in the universe that is inevitable is
change."
-- from Susan Griffin's "The Mind Can Be a Prison or a Door"

Waiting for the Barbarians presents a compelling and thought-provoking portrait of war, fear, enemies, power, torture, and the power plays that set in motion rumors of war.

Director Ciro Guerra has taken J. M. Coetzee's novel and brought it to the screen with all its nuances and mysteries intact. He has drawn out an astonishing performic by Mark Rylance as a good man whose heart is in the right place even though he struggles with his own demons. Johnny Depp and Robert Pattinson put in chilling performances as hard-as-nails authoritarians who share a lust for power.

The longer we study war and the toxins which set it into motion, the more we realize the importance of empathy, conscience, dialogue, and respect. Waiting for the Barbarians does not deal with these themes directly but they are hidden in the good intentions of the Magistrate, truly a hero for our times.