The Trial of the Chicago 7

Directed by Aaron Sorkin
Courtroom drama about the demonization of dissent which continues to this day.

Any act of rebellion, any physical defiance of those who make war, of those who perpetrate corporate greed and are responsible for state crimes, anything that seeks to draw the good to the good, nourishes our souls and holds out the possibility that we can touch and transform the souls of others.
-- Chris Hedges in Occupy Spirituality

The American culture wars have been raging since the Civil War and they flared up strongly again during the 1960s. At the heart of these confrontations was the clash between "social justice" advocates and those devoted to "traditional values." Various cultural critics have claimed victory for one side or the other but the political, social, economic, racial, and moral skirmishes continue in our times -- with ferocious velocity and polarized intensity.

The Trial of the Chicago 7 is a powerful historical drama written and directed by Aaron Sorkin who has a special gift for writing about trials (A Few Good Men, Molly's Game, To Kill a Mockingbird on Broadway) and political scenarios (The West Wing). This spunky, thought-provoking, and sobering film reveals the breadth and depth of the struggle between traditional and countercultural Americans to define what the nation stands for.

In August 1968, the Democratic National Convention in Chicago was ready to nominate Hubert Humphrey for President to run against Richard Nixon. In order to pressure the Democrats to take a strong stand against American involvement in the Vietnam war, thousands of mostly young protesters gathered in one of the city's parks. On the last night of the convention, they moved through the streets where they were tear gassed and beaten by the police and the National Guard. Who instigated this riot? The protestors said it was the Mayor Richard Daley's police. 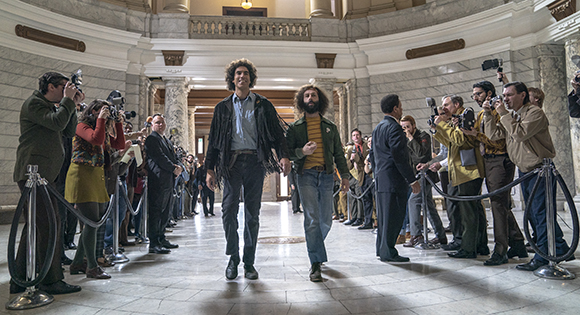 The film begins about a year later when Attorney General John Mitchell (John Doman) in newly elected President Richard Nixon's administration decides to charge eight activists for conspiracy to incite the riot. Those brought to trial are Tom Hayden (Eddie Redmayne) and Rennie Davis (Alex Sharp) of the Students for a Democratic Society, counter-culture Yippies Abbie Hoffman (Sacha Baron Cohen) and Jerry Rubin (Jeremy Strong), MOBE (National Mobilization Committee to End the War in Vietnam) organiz­ers David Dellinger (John Carroll Lynch), John Froines (Danny Flaherty), and Lee Weiner (Noah Robbins), and Black Panther Party Chairman Bobby Seale (Yahya Abdul-Mateen II). The latter vehemently protests that he had nothing to do with the riot, having only come to Chicago that day to give a speech; he refuses to have the same lawyer as the others and eventually is removed from the trial.

Richard Schultz (Joseph Gordon-Levitt) for the government squares off against noted civil rights lawyer William Kunstler (Mark Rylance). But the defendants' most formidable opponent turns out to be the judge, Julius Hoffman (Frank Langella), whose rulings about evidence and testimony oftentimes astounds the courtroom. 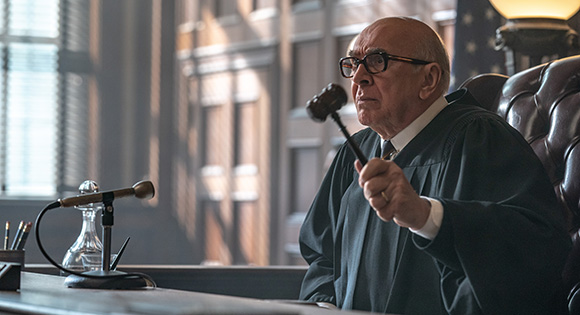 As the trial goes on for months, Abby Hoffman continues to claim that it is a "political trial" which they should use to denounce the war. He often clashes with Tom Hayden. They agree on the antiwar message and in support of greater equality, inclusion, and freedom of speech, but they disagree on strategy. In one of their face-offs, Abbie declares, "We weren't arrested because of what we did. We were arrested because of who we are."

Writer and director Sorkin uses flashbacks to the days before and during the Democratic Convention to further demonstrate the differences between the antiwar groups. The scenes will look all too familiar to contemporary Americans who have watched or participated in the Occupy Wall Street protests, the Black Live Matter demonstrations, and other marches that have been met with police and National Guard violence. 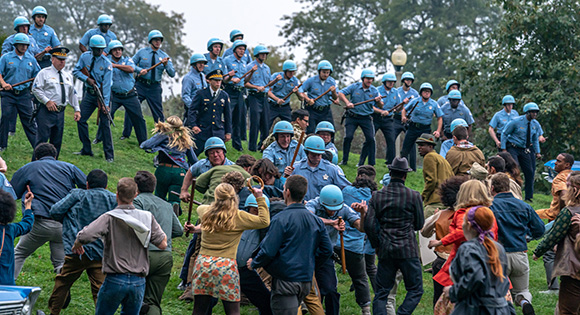 Sorkin says the narrative reflects "the demonization of dissent" that continues to this day. And this is why it is so important that it is being released by Netflix in the month prior to the 2020 election, when so many of the issues it raises are literally on the ballot. The Trial of the Chicago 7 has an uncanny relevance to our uneasy and politically charged times. It depicts a cultural polarization that threatens both dissent and free speech. It challenges us to ponder how the judicial system can be manipulated and used for political agendas. It recreates the violent clashes between police and American citizens. Through the substory of Bobbie Seale and his Black Panther ally Fred Hampton (Kelvin Harrison, Jr.) who was murdered during the trial, it reveals the fear that leads to disrespect of African-Americas. And it shines a light on the real battle in the 1960s and in our own times between law and order zealots and those who prioritize conscience and morality. Finally, it reminds us that to this day, the "whole world is watching."

R - drug use, bloody images, language throughout, some violence

A Prayer for the Courage to Resist