Directed by Steve McQueen
A powerful anthology of stories about the challenges faced by and the triumphs scored by the West Indian community in London in the 60s, 70s, and 80s.

"Look, I don't know much, but I know these things uncontrovertibly and inarguably:
One: stories matter waaaaay more than we know.
Two: all stories are, in some form, prayers.
Three: love is the story and the prayer that matters the most."
-- Brian Doyle in The Wet Engine

Small Axe is an anthology series of five original films directed by Steve McQueen, whose 2013 film 12 Years a Slave won the Academy Award for Best Picture. The title comes from an African proverb, popularized in a Bob Marley and the Wailers song: "If you are the big tree, we are the small axe." Set from the late 1960s to the mid-1980s, the films pay tribute to the small axes in London's West Indian community who triumph over systemic racism, overt discrimination, and other challenges. The films recreate the local culture, with its own music and food, while celebrating such universal qualities as determination, courage, hope, perseverance, joy, and love.

Four of the stories are based on historical situations and the people involved in them; the fifth conveys the exuberance of a time and a place through music. McQueen explains, "I recall each of these stories being told to me either by my parents, my aunt, and by experiencing racial discrimination myself growing up in the 70s and 80s. These are all our stories. . . . Although they are about the past, they are very much concerned with the present: a commentary on where we were, where we are and where we want to go." 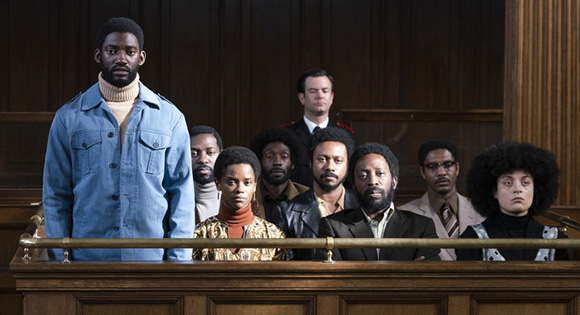 "Overcoming racism is more than an issue or a cause — it is also a story, which can be part of each of our stories, too. . . . Understanding our own stories about race, and talking about them to one another, is absolutely essential if we are to become part of the larger pilgrimage to defeat racism."
— Jim Wallis in America's Original Sin

Mangrove tells the true story of Frank Crichlow (Shauh Parkes), the proud black owner of a popular restaurant serving West Indian cuisine in Notting Hill. It is frequented by immigrants from the Caribbean, their friends and neighbors, and soon becomes a favored gathering spot for those wanting to experience and celebrate black culture. But the more popular it becomes, the more it is targeted by the Metropolitan Police Force. After several undeserved raids, the Mangrove fills up with activists who are sick and tired of overt discrimination by the police.

Director McQueen has noted one message of this film: "We're nothing as individuals but we're something as a collective and a community." Among those helping to motivate the community to resist the police actions is Altheia Jones-LeCointe (Letitia Wright) of the Black Panthers. When their peaceful protest turns into a confrontation with the police, Frank, Altheia, and others are arrested for incitement to riot. They became known as the Mangrove Nine. The film covers their trial and its impact on the community.

We have a soft spot in our hearts for characters in films who want to make themselves and the world a better place to live. The Mangrove Five use all their resources, personal and communal, to defend themselves in court and to assert the right of Black people to demonstrate and shape their own destiny. Their story is part of the larger story of the fight to defeat racism. 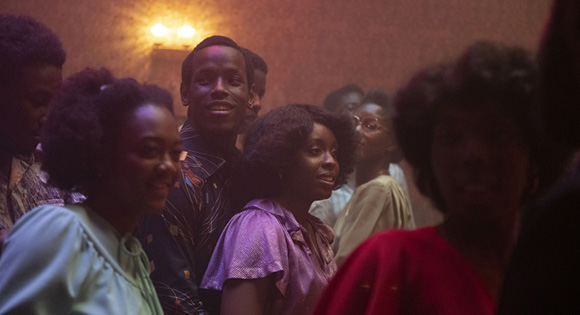 "He who does not dance does not know what is happening."
-- African proverb

In the opening scenes of Lovers Rock, we watch a group of young Black men in a small house in Notting Hill as they prepare for a house party, clearing the room to make a dance floor, setting up the speakers and the dj's control table. In the kitchen, women sing as they prepare Jamaican food in the kitchen. And around the neighborhood, young women plan their outfits for a night out dancing.

Even before the members of London's West Indian community hit the dance floor, joy is unconfined in this place. The music is mostly "lovers rock," a combination of soul and British reggae, a contagious mix of swing and sway, action and embrace, twist and turn. But there are no rules to the dancing. Known as a "Blues" party, these dances were all about freedom. If young Black people were not welcomed at white clubs, they would create their own where they could be themselves.

Raphael Cushnir in his book How Now observes: "Dancing connects us with flow, with spirit, and almost instantly, with the Now. In order to reap the gifts dance has to offer, we don't need to be skillful at it — just willing." And it helps if you love the songs. In one extended scene, the dancers sing along to Janet Kay's 1979 hit "Silly Games," continuing a ccapella when the music ends. It also helps if you are open to making a love connection, like Martha (Amarah-Jae St. Aubyn) and Franklyn (Michael Ward).

Joy in this exuberant and romantic film is the big brother of energy, play, and pleasure. Steve McQueen shows how reggae music is the heart and soul, the refuge, and the playground for Blacks and millions of others who resonate with the beat and let themselves go with the flow. 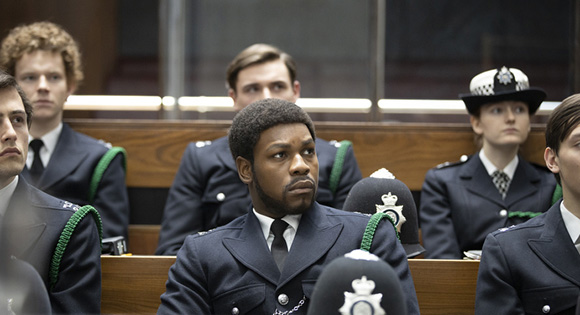 "Justice is not an ideal state or theory but a matter of personal sensibility, a set of emotions that engage us with the world and make us care."
— Robert Solomon in A Passion for Justice

What is the best way to deal with those who treat us unjustly? Do we fight them or join them to try to make changes from within an institution? This is the question faced by Leroy Logan (John Boyega), a forensic scientist who decides to join the police force, becoming the first Black officer. It's not that he's unaware of the systemic racism in the department. His own father (Steve Toussaint) is so brutally assaulted by policemen that he ends up in the hospital. Yet, even though his decision to join the force causes a rift with his father, Leroy is sure he can make a difference.

He soon learns about the reality of racism both from an Anglo-Indian friend (Assad Zaman) and from his own experiences. The White officers ignore him, to the point of putting him in real danger, and community members consider him to be a traitor.

This is a story that rides on emotions -- Leroy's, his father's, and our own -- as we are made to feel the conflicts, the pain, and the humiliation they suffer. Throughout it all, the music of Al Green reinforces our feelings. We find ourselves actually relieved to learn at the end that Leroy made it and became one of London's most distinguished Superintendents of the Metropolitan Police Force even though, as his father tells him, "Big change is a slow turning wheel." 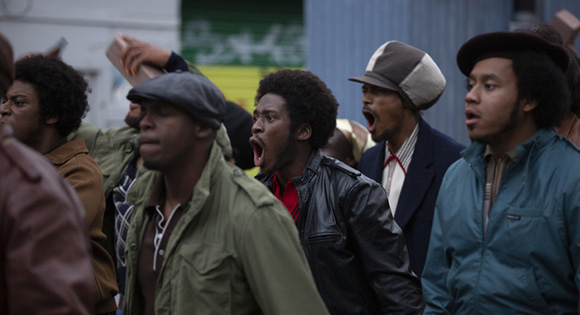 "You will learn to savor words and language. No matter what anybody tells you, words and ideas can teach the world."
-- Professor John Keating (Robin Williams) in the movie Dead Poets Society

Alex Wheatle is an award-winning British young adult fiction writer; his semi-autobiographical novels include Brixton Rock and Straight Out of Crongton. This film tells the story of his life up to the beginning of his writing career.

Left by his Jamaican father in a mostly white children's home, young Alex is dismissed as a "nasty little boy." At age 15, he (Sheyi Cole) escapes the abuses of institutional life and moves to Brixton where he discovers how music nourishes his soul. He becomes a successful DJ and begins writing lyrics.

When 13 young Blacks are killed in the New Cross Fire, assumed to have been set by racists, Alex becomes politicized. When he then participates in the Brixton Uprising marches, he is arrested and sent to jail. This is where his life as a writer begins. After he tells the story of his life to his cellmate (Robbie Gee), a Rastafarian, he is given books to read and encouraged to learn the power that comes from writing.

Actor Sheyi Cole has described his view of Alex's story: "As a Black community, all that we see on TV are stereotypes. It's nice to have something fresh. This is a story about a normal human being that has gone through his life and his journey and has come out on the bright side. It's like the redemption and the journey, which is the most important thing." 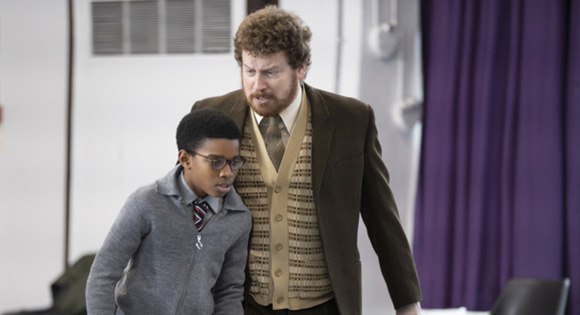 "Education is not filling a bucket but the lighting of a fire."
-- W. B. Yeats

This film exposes a scandalous reality in the British education system in the 1970s and its effect on West Indian immigrant children. Although the characters are fiction, the segregation they experience is factual.

Kingsley (Kenyan Sandy), a 12-year-old boy who dreams of becoming an astronaut, is abruptly transferred from his regular school to an ESN (Educationally Sub-Normal) school for those with special needs; the reason given is his disruptive behavior. His loving parents at first accept this transfer; his father Esmond (Daniel Francis) works a night shift and his mother Agnes (Sharlene Whyte), a nurse, has two jobs. They value education and assume Kingsley will get some needed help at the new school.

One day a community organizer (Josette Simon) visits Agnes and leaves a pamphlet about "How the West Indian Child Is Made Educationally Sub-normal in the British School System." Kingsley's reports on what is really happening at his school confirm its assertions. Fortunately, a network of Saturday schools have sprung up in the community, and Kingsley flourishes in one of them.

If education is, as so often stated, the pathway to a better life, any evidence of discrimination and inequality in the system must be challenged. McQueen's expose of one system's failings should serve as a warning sign for parents everywhere to doublecheck the quality and fairness of their children's educational opportunities.