Directed by Pete Docter, Kemp Powers
An animated masterpiece about a soul's adventure that will get you thinking and talking about the life and the afterlife, your passions and purpose, and the spark that sets it all going.

Soul is a 2020 computer-animated fantasy/comedy/drama film produced by Pixar Animation Studios and released by Walt Disney Pictures. This is a spiritually rich film that immerses us in what Joseph Campbell once called "the soul's high adventure." Its protagonist is a talented jazz pianist whose split mind and body brings him to close encounters with death, the afterlife, music, ecstasy, purpose, passion, meaning, joy, being present, and other special qualities, themes, and circumstances of the soul.

Pete Doctor, who directed Up and Inside Out, co-directed Soul with Kemp Powers. He also cowrote the screenplay with Powers and Mike Jones. The film's producers consulted jazz musicians including Herbie Hancock and Terri Lyne Carrington and used the sessions of Jon Batiste.

Joe (voiced by Jamie Foxx), a worn-out middle-school music and band teacher, is experiencing a mid-life crisis. He is tired of students who lack the capacity to pay attention or to exhibit any pleasure in playing music.

When Joe is offered a full-time teaching position at the school, his mother (Phylicia Rashad) is thrilled about his promotion. Joe is less excited. What does get him flying high is when a former student invites him to fill in for a piano player at the best jazz club in the city. The featured artist, Dorothea Williams (Angela Bassett), plays the saxophone and is one of Joe's favorite jazz performers.

Leaving a Mark upon the World
Soul and Mr. Holland's Qpus (1985) are both substantive movies about middle-aged music teachers who dream of leaving a mark upon the world with their own musical creations. They share a soulful vision of life that is expressed through their music. What major dreams have taken hold of you and led you into new territory? What legacy do you want to leave behind?

Although Joe is nervous about his audition for Dorothea Williams, he surprises everyone in the room with an ecstatic improvised jazz performance on the piano. Dorothea is so impressed that she invites him to return for the evening show and tells him to be prepared to go on the road with the band. On a self-induced high, Joe skips, dances, twirls, and whirls down the street.

Improvisation
In her insightful book Improv Wisdom, Patricia Ryan Madson observes: "A good improviser is someone who is awake, not entirely self-focused, and moved by a desire to do something useful and give something back and who acts upon this impulse." Describe your response to Joe's improvised piano piece. Then select which of these laws of improvisation best suit you: Say Yes. Don't prepare. Just show up. Pay attention. Face the facts. Act now.

Landing Where You Least Expect to Be

Unfortunately, while he is celebrating, Joe falls into a manhole on the street. He wakes up to find that his soul is now separated from his body, and he is a little blue blob-like being on the way to The Great Beyond. Determined to avoid going there just when he finally got his shot at success, he manages to get to a place called The Great Before. This is where new souls find their purpose in order to be ready to assume a human body.

The Afterlife
Many movies have offered visions of where we might go after death. A few of our favorites include After Life, Defending Your Life, Heaven Can Wait, and Truly, Madly, Deeply. These and more are listed in our collection Films about Heaven, Angels, and the Afterlife. 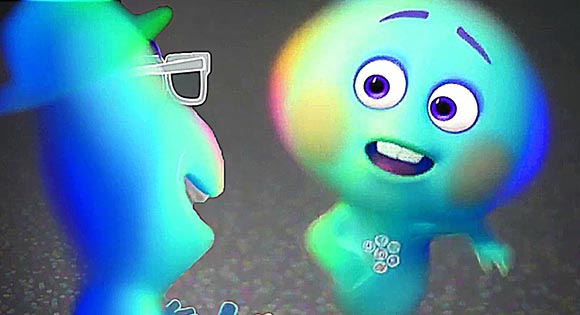 In All the World There Is No Other Exactly Like You

Joe's soul in the Great Before is assigned to become "a soul counselor" to prepare 22 (Tina Fey) for her life on Earth. To get her Earth Pass, she needs to complete her badge of character traits by finding the spark that will bring out her passion and enthusiasm. But 22 is a tough cookie who has no interest in going to Earth; she's convinced life there is not worth the trouble. And perhaps she's right. Joe discovers that his physical body is still alive in a hospital bed, but it is soulless.

Definitions of Soul
In Care of the Soul, Thomas Moore writes: "Soul is not a thing but a quality or dimension of experiencing life or ourselves. It has to do with death, value, relatedness, heart, personal substance." And in Soul: An Archaeology: Readings from Socrates to Ray Charles, editor Phil Cousineau describes soul as "the elusive element that infuses existence with meaning, vitality, authenticity, beauty, deep desire, real character. Soul is that unmistakable fire that infuses all truly creative endeavors and sends the shiver up the spine, telling us we're in the presence of lived truth." Keep these definitions in mind as you watch Joe and 22 try to connect body and soul and find what it takes to bring them both alive. 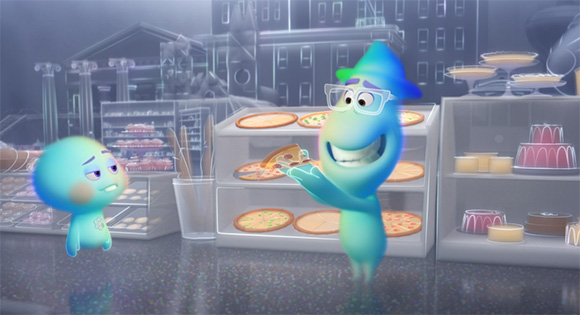 Thanks to some help from Moonwind (Graham Norton) from Mystics Without Borders, who take them through a thin spot, Joe and 22 do get to Earth. But Joe's soul ends up in a cat's body! Many more shenanigans happen now (too many to go into in a plot synopsis) before 22 finds her purpose, and her experiences on Earth, including a collection of little objects, catalyze Joe's memories of what he loves about "regular ol' livin."

Everyday Spirituality
Asked how he plans to spend the rest of his life, Joe says he's not sure, "but I do know I'm going to live every minute of it." Make your own vow to practice everyday spirituality. What is your purpose, and what is your spark?

Soul joins an impressive and provocative group of films with its treatment of the afterlife. It also demonstrates how contemplating what comes after death makes us reflect upon what we love about life. Use this story to discuss the myriad of possibilities including heaven and earth, celestial realms, body, immortality, forms of spirit, inspiration, ecstasy and transformation, and enlightenment.