Directed by Baz Luhrmann
A dazzling portrait of Elvis’s life and career that reveals the roots of his appeal.

“Elvis, like a giant mirror, reflects our own struggles with forces of good and evil, and creation and destruction. In a real way, when we see Elvis we see ourselves. Symbolizing the battle between the true and false in us all, Elvis’s huge appeal lies in his power as an archetype -- his epic rise and fall captures what is in all of us.”
— David Rosen in The Tao of Elvis

Baz Luhrmann’s film Elvis is a phantasmagorical work. It follows this director’s juiced-up William Shakespeare’s Romeo and Juliet; Australia, a spellbinding old-fashioned adventure story; Strictly Ballroom, a celebration of soulful individuals who make the most of their creativity on the ballroom dance floor; and Moulin Rouge, a love-drenched romance.

Weinshanker, one of the producers of Elvis, sums up this revved-up movie:

“This is a frenetic, thousand-miles-an-hour, by the seat of your pants way of storytelling.”

The film captures Elvis’s over-the-top performances, flooding the screen with color, costumes, and camera angles; the singer/songwriter comes across as an excited, dedicated, and daring performer. But there are also small, quiet scenes, where another side of the man emerges.

A Special Kind of Leader

Rock critic Dave Marsh points to another dimension of the King: “Elvis Presley was more than anything a spiritual leader of our generation.”

His music and his way of being in the world touched on many themes of his time, perhaps more than any other musician. And his popularity has never ceased. If we were to assign “keywords” to his story, the list would include: love, purpose, religions, meaning, sex, success, money, fame, music, sinner, relationships, youth, middle-age, racism, black music, self-destruction, legacy.

This movie touches on all those subjects.

Quest for Meaning and Purpose

Elvis Presley’s (Austin Butler) short but eventful life of 42 years was a quest for meaning and purpose through the medium of popular music, gospel, and rhythm & blues. He started on a path of transformation and stumbled on the path of addiction and self-destruction. Like all of us, he experienced life as both saint and sinner. 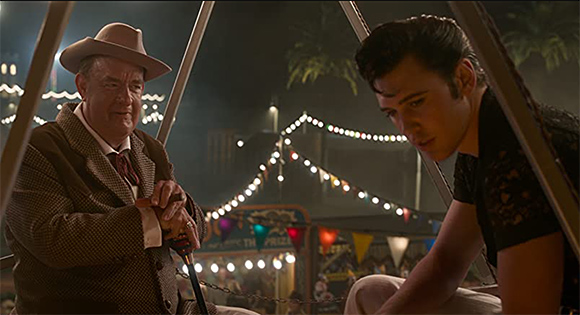 Presley, who was born on January 8, 1935, in Tupelo, Mississippi, had a love/hate relationship with many people in his life, including his mother (Helen Thomson) and father (Richard Roxburgh) who both expected too much from him.

The most formidable person in his life and musical career turns out to be Col. Tom Parker (Tom Hanks), his immensely ambitious, greedy, and self-centered manager for 20 years. Much of the film is told from his perspective. Part conman, part showman, and part control freak, Parker (Elvis calls him “admiral”), Parker orchestrated Elvis’s career through difficult times, a stint in the army, movie stardom, and a long stint in Las Vegas. Showman and handler, he succeeded in making Elvis into the most successful solo recording artist of all time. Some of his iconic performances are reproduced in the film, using remixes of actual Elvis recordings.

Elvis’s early music was influenced by Black musicians such as B. B. King (Kevin Harrison, Jr.), and he often went to Black clubs to soak in the sounds. Also important in the King’s life was his wife Priscilla Presley (Olivia DeJonge) who was not successful in mitigating his more dangerous habits. 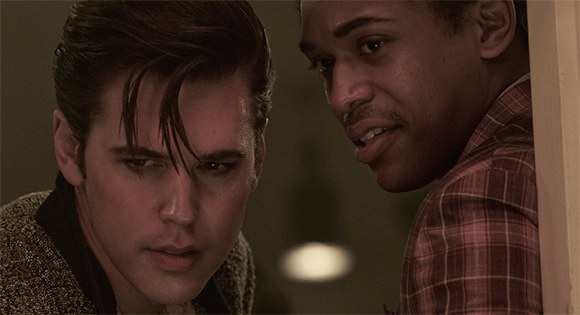 Perhaps the biggest take-away from this portrait of Elvis is his openness to new styles of music and performance. Openness, says Catholic sister Joan Puls, is “the attitude and condition that is at the heart of all spirituality.” This marks him as a spiritual leader more than his recordings of gospel songs.