By Bill Moyers
A top-drawer collection of 47 interviews with independent thinkers on a wide variety of subjects.

Every Friday evening we used to watch Bill Moyers Journal on public television. It was one of our regular practices, a way of keeping abreast of what's really going on in the world. Moyers's guests were top-drawer scholars, journalists, writers, whistle-blowers, politicians, and specialists in their fields. We now sorely miss his sensitive and sophisticated commentary and questions along with his ability to cut to the heart of a controversial issue.

When Moyers retired from public television, we wrote him a thank you letter. We are grateful that he did more to further the study of the world's religions and the appreciation of poetry than anyone on the planet. Moyers may not see himself as a spiritual teacher, but he is one of the best around thanks to his openness and hospitality. Other aspects of his spirituality shine through his delight in being a meaning maker, taking the long view, pursuing the transcendent, and reveling in the imagination.

That is the reason we were so excited when a review copy of Bill Moyers Journal: The Conversation Continues arrived at our loft. Here you will find interviews with 47 "independent thinkers" from the opener with comedian Jon Stewart to one with nature writer Barry Lopez. These thought-provoking conversations were originally aired from 2007 - 2010 and give us a masterful overview of the social, moral, political, and economic changes taking place in America during this period.

In the introduction, Moyers lists some of the stories and conflicts covered on these pages: health care reform, the war in Afghanistan, poverty, hunger, the quality of the food we eat, the degeneration of our cities and our education system, race politics and injustice, human rights and torture during an age of terrorism, the war between Palestinians and Israelis, aging in America, capital punishment and the blighted penal system, the conflict over gay marriage, and the politicization of our courts. Some of our favorite interviews are those with comedian Jon Stewart, historian Howard Zinn, theologian James Cone, animal advocate Jane Goodall, poet Robert Bly, novelist Maxine Hong Kingston, writer Barry Lopez, novelist Louise Erdrich, journalist Michael Pollan, and monotheist freelancer Karen Armstrong. 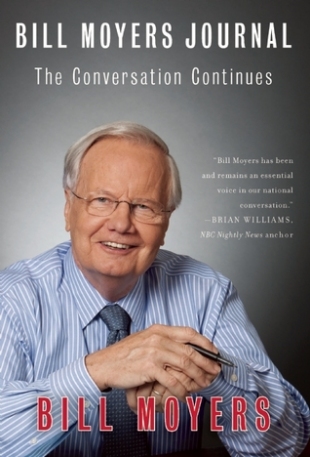