America at War with Itself

By Henry A. Giroux
A cogent and hard-hitting critique of America's descent into authoritarianism.

Henry A. Giroux is a world-renowned educator, author, and public intellectual. He currently holds the McMaster University Chair for Scholarship in the Public Interest and The Paulo Freire Distinguished Scholar Chair in Critical Pedagogy. A prolific and busy commentator, he has appeared in a wide range of media. His last book, The Violence of Organized Forgetting, was published in 2014. He lives in Ontario, Canada.

This cogent and hard-hitting book puts on display the many factors that are eating away at democracy in the United States as the public embraces a new brand of toxic authoritarianism. Underlying this impulse is a long and twisted history of the extermination of Native Americans, the dehumanization and enslavement of Africans, and the wartime imprisonment of Japanese Americans in concentration camps. Throughout American history, the pioneers in the wilderness and the whites in cities have searched for wealth, power, and a place to call home while carrying on unrelenting crusades of anger, hostility, and hatred against all those who were seen as "Other."

Giroux laments the current blooming of these anti-democratic developments. He points to observations made by Hannah Arendt, the great theorist of totalitarianism, who described a "sand storm" of anti-democratic elements in U.S. society:

"the culture of traditionalism, the dismantling of civil and political rights, the ongoing militarization of society, the attack on labor, the 'religionization of politics,' the attack on labor, the obsession with national security, the perpetration of human rights abuses, the emergence of a police state, entrenched racism, and the attempts by demagogues to undermine education as a foundation for producing critical citizenry."

Another theorist, Sheldon Wolin, identified other threats to democracy in "the corporatization of the state and civil society, the destruction of public goods and commons, the commercial control of the media, and the rise of an economic survival-of-the-fittest ethos. "

Giroux examines the rise of the military; it is now shaping all aspects of American life. Since the end of the Cold War, the United States has built "the most expensive and lethal military force in the world." The defense budget for 2015 totaled $598.5 billion and accounted for 54 percent of all federal discretionary spending; the U.S. defense budget is larger than the combined military spending of China, Russian, the United Kingdom, Japan, France, Saudi Arabia, India, Germany, Italy, and Brazil. The military circles the globe with around 800 military bases, producing a massive worldwide landscape of military force, at an annual budget of 156 billion.

There is no place where you can escape the mantra of "support the troops" whether you read it on your bill at the gas station or sit at a pro football game and hear the praises of those serving in the military. Even the national nightly news regularly makes the link between military values and patriotism. Recently two feature films received high marks from critics even though they were blatant exercises in pro-war and pro-militarist propaganda — Kathryn Bigelow's Zero Dark Thirty and Clint Eastwood's American Sniper.

The snappiest section in America at War with Itself contains a detailed and thought-provoking profile of Donald Trump and his vision of America animated by guns, walls, surveillance, prisons, media, wars, racism, and xenophobia. Giroux details how during the 2015 – 2016 presidential contest, "Trump pushed the political envelope further and further toward intolerance and an American-style form of proto-fascism." He elaborates:

"Trump is the symbol of a frightened society that is increasingly seduced to choose the swagger of a vigilante strongman over the processes of collective sovereignty, the gun over diplomacy, and the wall instead of the bridge. Trump's public rants and humiliating snipes make for great TV, and are, as Frank Rich once argued, 'another symptom of a political virus that can't be quarantined and whose cure is as yet unknown.' "

Giroux then moves on to the specter of "Domestic Terrorism" in Flint, Michigan, and the "Appetite for Destruction" in the country's obsession with guns. Whether he is pondering the racism of police in Ferguson or the pursuit of revenge by ISIS, the author always brings us home to what this all means for us today. In this regard, he concludes: "Violence has become America's national sport and its chief mode of entertainment." 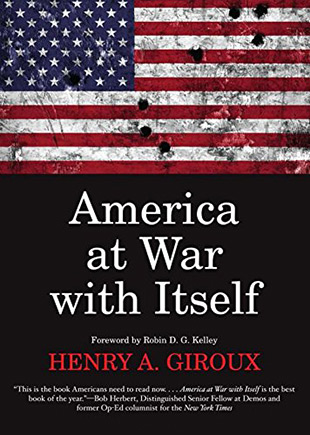