This course explores three poems by Walt Whitman: "Long, Too Long America," "Salut Au Monde," and "Song of the Open Road." It then moves into a more contemporary mode with two of Maya Angelou's poems: "Phenomenal Woman" and "Still I Rise."

Whitman (1819 - 1892) has been widely anthologized and much studied since his death; he is recognized as an innovator in American poetic form and as "America's poet." Maya Angelou (1928 - 2014) received a list of awards too long to list fully. It includes a Presidential Medal of Freedom, several Grammy Awards, NAACP Image Awards, the Quill Award for Poetry, and the Springarn Medal.

The three Whitman poems are marked by the use of parallelism, which allows him to reflect in his style the democracy he is singing. Parallelism is a way to avoid hierarchies and power relationships at the level of the sentence, echoing Whitman's hopes for democracy.

Angelou's poems exhibit an accessibility and directness of address capable of arresting us as readers and holding us in place until she is finished. Her tone in these poems expresses their speakers' confidence; the woman in both knows her worth and speaks it freely in a bold tone that she knows the reader will interpret as audacity.

We look forward to sharing these poems with you! In each of five emails, which you can schedule to receive at a pace that suits your needs, you will receive:

These Whitman and Angelou poems are among the twelve selections in the We the People Book Club, an opportunity to strengthen your vision of democracy by contemplating America's past and possibilities as presented by classic and contemporary literary voices. You may also be interested in the e-courses mentioned in the sidebar under "Also Recommended." 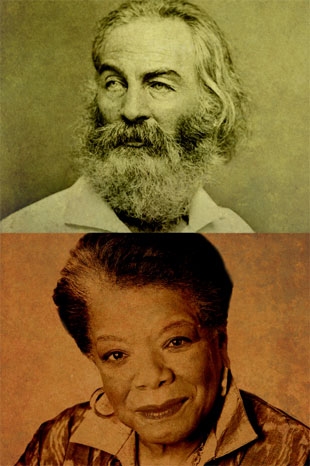