Published in 1893, Pudd'nhead Wilson takes place before the Civil War in the 1830s in a small slaveholding port town called Dawson's Landing, Missouri. As the novel begins, a young New York lawyer named Mr. David Wilson moves to Dawson's Landing. In his first interactions with the simple-but-self-important townsfolk, Wilson make use of ironic deadpan humor, and not understanding irony, the townsfolk brand him a fool. His assumed stupidity quickly earns him the name "Pudd'nhead" and tanks his hopes of setting up a successful practice. Marginalized in the town generally, Wilson is also somewhat of a marginal character in the novel, the main characters of which are an enslaved woman named Roxana and her son.

Roxy works in the house of Percy Northumberland Driscoll, brother of the town's most illustrious citizen, Judge York Leicester Driscoll. Mr. Driscoll's son, Thomas a Beckett Driscoll, and Roxy's son, Valet de Chambres, are born at the same time and are both in Roxy's care. Tom and Chambers (as they are later called) share more than a birthdate and a caretaker. They are indistinguishable without clothes. Roxy is considered black and thus enslavable by "a fiction of law and custom"; her skin is as white as her master's. Roxy's son, born of an affair with one of the town's most esteemed gentlemen, passes as well as she does.

What sets the story in motion is the terror of a system that considers her an object and thus does not respect her family. The horrible thought that she could easily be sold and separated from her only family leads Roxy to do the one thing in her power: she switches the babies' clothing so that her son will grow up with the protections and advantages of being white. It works. No one notices.

However, her son "Tom" becomes her master in more than name, causing his mother a very different kind of heartache. Subject to the privileges of whiteness, full of power and bereft of character, "Tom" develops into a racist monster who treats his own mother like a slave. Subject to the privations of slavery and racism, "Chambers," bereft of power and full of character, becomes a kind and courageous young man a mother could be proud of.

From there a tale unravels that only a storyteller like Mark Twain could twist and then untangle; we see what happens when a pair of Italian twins, the science of fingerprinting, and ancient codes of honor get mixed up in the story of a "white" master who finds out he is the son of a "black" woman.

Pudd'nhead Wilson is one of twelve books included in the We the People Book Club, an opportunity to strengthen your vision of democracy by contemplating America's past and possibilities as presented by classic and contemporary literary voices. You may also be interested in the other books in this series, which are listed on the book club's webpage. 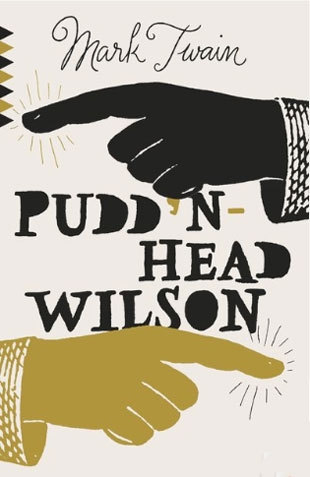