Exploring A Good Man Is Hard to Find

A Good Man Is Hard to Find, published in 1955, is Flannery O'Connor's best-known and most anthologized work. While critical understanding of these ten stories varied, even those who didn't quite know what to make of her perverse imagination affirmed her blazing talent.

The stories are set in the Jim Crow American South, primarily in rural areas. O'Connor's characters are mostly white women and children. Race provides some narrative tension, but the greater and more consistent tension in her stories is theological. The relationship between a fallen humanity and a redeeming God animates these stories and, indeed, all of O'Connor's work. Thus, though the stories are set in a particular place and time, they gather meaning more from the universal than the particular, presenting us with the most elemental drama: alienated, arrogant, blind, and miserable humans struggling to see and to accept the grace that tries to break through to their lives. Whether they accept or deny it, transformation results.

O'Connor's stories gained her wide acclaim in her very short life. She earned O'Henry citations in 1955 and 1957. The stories from A Good Man is Hard to Find were included in the posthumous collection, The Complete Stories, which won the National Book Award in 1972. In honor of her mastery of the short story form, The University of Georgia Press annually awards the Flannery O'Connor Award for Short Fiction.

A Good Man Is Hard to Find is one of twelve books included in the We the People Book Club, an opportunity to strengthen your vision of democracy by contemplating America's past and possibilities as presented by classic and contemporary literary voices. You may also be interested in the e-courses mentioned in the sidebar under "Also Recommended." 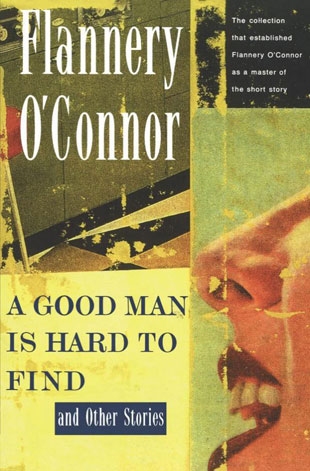