By We the People Book Club

With The Partly Cloudy Patriot, we can take a pointedly lighthearted turn in our exploration of spirituality and democracy. This book is a collection of personal essays about history, historiography, and the nerd journalist who is obsessed with both. Like Mark Twain, Vowell's humor capitalizes on America's sins and foibles; but underneath the (at times) laugh-out-loud funniness of her prose is a sincere attempt to wrangle into language the complex romance she shares with the United States: She explores what endears America to her, what infuriates her about America, and how it can be that, in all this ambivalence, she can still feel deeply patriotic. What makes Vowell herself endearing to the reader is that she satirizes her own life side-by-side with America's national life, exploring how they intersect and reflect one another.

Vowell is most widely known for her radio and voiceover work. She was an original producer and longtime contributor to WPRI's This American Life, which served as an incubator for many of her published works. In addition to this collection of personal essays and another entitled Take the Cannoli, Vowell has written five other nonfiction books, including a memoir about listening to the radio for a year in 1995 and historical monographs on the Puritans and Marquis de Lafayette. Much of her published writing builds on her work as a journalist and social critic.

We look forward to sharing this book with you! In each of five emails, which you can schedule to receive at a pace that suits your needs, you will receive:

The Partly Cloudy Patriot is one of twelve books included in the We the People Book Club, an opportunity to strengthen your vision of democracy by contemplating America's past and possibilities as presented by classic and contemporary literary voices. You may also be interested in the other books in this series, which are listed on the book club's webpage. 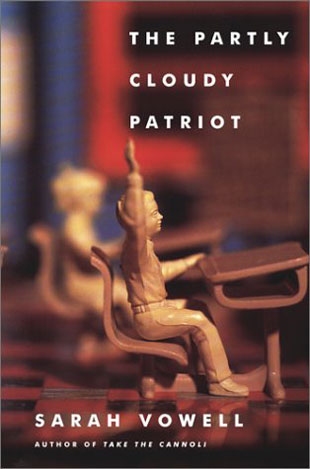