"The great nineteenth-century Tibetan Dzokchen meditator Dza Patrul Rinpoche always maintained a demeanor of true humility. At one time, when he was giving a series of teachings to a large crowd of students, he experienced a forceful yearning for solitude. So one day he quietly left his residence and disappeared, dressed like an ordinary pilgrim and carrying a walking staff and very little else. When he reached a nomadic camp he sought shelter for a few days with one of the families. While he was staying with them, his hostess asked him to read some texts and, since he looked just like an ordinary pilgrim, in return for his food and lodging she asked him to help with the household chores, which included the disposal of the contents of her chamber pot.

"One day, while he was away from the camp attending to this task, some of his well-dressed monk students came looking for him. When his hostess heard their description of him, she suddenly realized this was the same person she had asked to throw away the contents of her chamber pot. It is said that she was so embarrassed that she just ran away! Such was the humility of this great teacher, who had many thousands of students."
— His Holiness the Dalai Lama in Lighting the Way

"Once upon a time a man came to a rabbi with this question: 'Rabbi, it is written that once we could see the face of God. Why can't we do that anymore? What happened to us that we can no longer reach that high to see the face of God?'

"The rabbi was very old. He had seen so much in life. He closed his eyes, running his hand through his white beard and sighed heavily. 'My son, that is not the way it is at all. You cannot see the face of God because there are so few who can stoop that low. How sad this is, but it is the truth. Learn to bend, to bow, to kneel and stoop and you will be able to see God face-to-face!' "
— Megan McKenna in Christ All Merciful

"The Sufis tell of a man who was so virtuous that the angels offered him the gift of miracles. They offered him the gift of healing hands, the ability to read minds, the gift of flight, and many others. He refused them all. Finally, they insisted that he choose, or they would choose for him. 'Very well,' he replied. 'I ask that I may be able to do great good in the world without myself or anyone else knowing it.' The angels granted this request by deciding that every time the saint's shadow was cast behind him, it would have the power to heal illness, to comfort the inconsolable, and to bring joy in place of sorrow. Wherever he walked, his shadow caused dried rivers to flow, withered plants to flower, and brought gladness to the hearts of men, women, and children. The saint simply went about his life, and all this happened in his wake. After a time, his name was forgotten, and he was simply called the 'Holy Shadow.' "
— Aura Glaser in A Call to Compassion

A Model of Nothingness

"A young man had heard of Rumi's mystical power and walked from Constantinople to Konya (about three hundred miles) to meet him. Coming into Konya, he saw an old man walking toward him whom he immediately recognized as the Great One. Immediately he prostrated himself before Rumi in the dust. When he got up, he saw that Rumi too, had prostrated himself before him. This went on thirty-two times until the young man cried out, 'What on Earth are you doing? I am no one and you are the king of Mystics. How can you prostrate yourself before me?'

"Rumi answered, 'Why shouldn't I prostrate myself before a servant of my Beloved? Didn't the Prophet say, "Blessed is who is chaste in his beauty and humble in his honor"?'

"Then, Rumi added softly, 'And if I had not shown you my nothingness, what would I be useful for?' "
— Andrew Harvey in One Heart by Bonnie Louise Kuchler

"Once when Sri Krishna was playing on his flute, Radha eyed it with jealous eyes and asked, 'What has your flute done to enjoy the blessing of being held to your lips while you play upon it hour after hour?' In answer, Sri Krishna took the flute from his lips and turned it so Radha could see inside, saying, 'Look, it's completely empty, so it is easy for me to fill it with the melody of my divine song.' We, too, can become full of the Lord's infinite love and abiding joy when we empty ourselves of all that is selfish and separate."
— Eknath Easwaran in The Bhagavad Gita for Daily Living: Volume 1 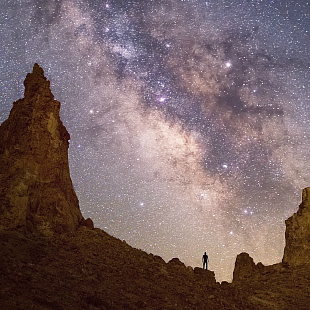