Directed by Ken Loach
A stirring morality play about creating community, leading others, and having respect for one's enemies.

In 1932, Jimmy Gralton (Barry Ward) returns to his home in Ireland after spending 10 years working in New York. He wants to slow down, savor the quiet life, and help his elderly mother (Aileen Henry) run the family farm. When he was a boy, she established the area's first mobile library bringing new ideas and adventures into the lives of her son and their neighbors. Eventually, he became a free-thinker and Communist.

At a party celebrating his arrival, Gralton reconnects with Oonagh (Simone Kirby), the woman he loved and left behind. She is now married with children. Even though she says to him "Nobody's the same after ten years away," there is still a strong tie between them. 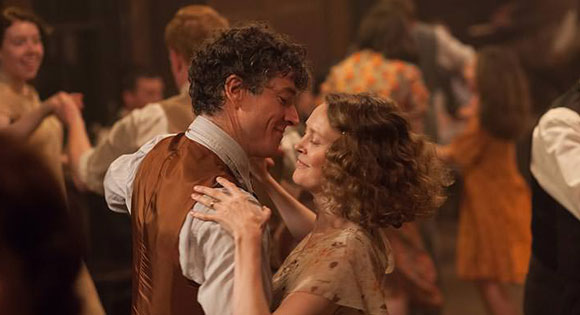 In 1921, Gralton created a vital and flourishing community by fixing up a church hall for the poor people of Leitrim who were oppressed by wealthy landlords and the Catholic church which sought to control every aspect of their lives. He made this space into a holy place with art classes, boxing, music, and poetry readings. But, under pressure from the alliance of the church, the landowners, and politicians, Gralton gave up and fled to America for a new life.

Now that he is back, the youth in the area, having heard about the former community hall, convince him to fix the place up and open again. Most of the young men and boys have no jobs and along with their girlfriends, they want a relaxed and celebratory place to hold dances. 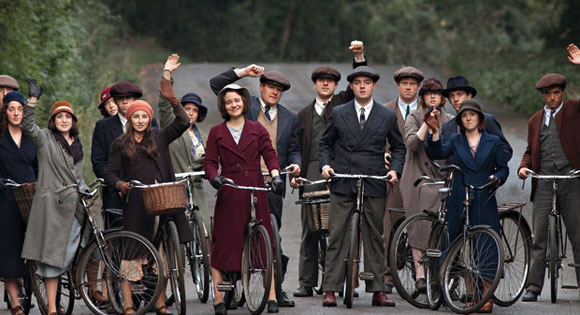 Gralton's chief critic and formidable enemy is Father Sheridan (Jim Norton) who is appalled by his communist political perspective. In a judgmental sermon, the priest condemns the dance night at the community center as a place where "the sins of jazz music and the rhythms from darkest Africa with pelvic thrusts may poison the minds."

The various political groups in the community convince Gralton to give a speech against the eviction of poor tenant families from houses on the big estates. He masters the moment with a brief but passionate speech, but later, a mysterious gunman shoots through an open window at the community center. Does this mean that Gralton will once again have to leave his homeland? 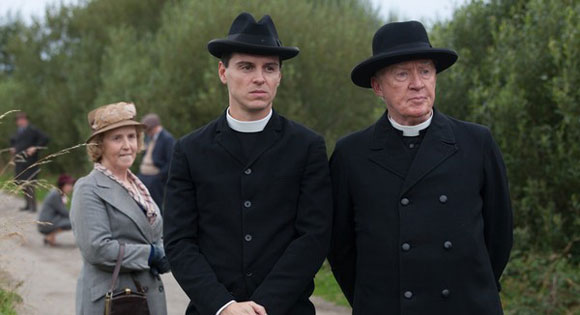 Jimmy's Hall is British director Ken Loach's 24th fiction feature. It can be seen as a thought-piece companion to The Wind That Shakes the Barley. Based freely on a true story, this is one of best portraits of a community of volunteers working together that has been depicted on the screen for a long time. They share their talents with one another, are moved by a poem read by a young girl, and are energized by dancing together. Maybe "think, laugh, and dance" ought to become a mantra for all intentional communities!

Barry Ward puts in a stellar performance as the soft-spoken man whose leadership abilities spring from his trust, support, and encouragement of others. He hits the mark as a person who wins our admiration because he puts the welfare of individuals and the community above his own needs and wants.

The third and final appealing thing about Jimmy's Hall is screenplay writer Paul Laverty's depiction of the philosophical clash between Father Sheridan, a parish priest of the old school who thinks he sees everything so clearly, and Gralton, as an idealist who tries to practice love in his daily life. After doing everything he can to drive his enemy out of town, the priest honors Gralton's spiritual practices of listening, reverence, and respect for all. Again, it is Gralton's humility which makes him such an extraordinary hero.

PG-13 - drug use throughout, sexual content, graphic nudity, language and some violence