He Named Me Malala

Directed by Davis Guggenheim
An inspiring documentary about the teenage advocate for girls' education, reconciliation, and peace.

Malala Yousafzai is a Pakistani teenager who is the youngest person ever to receive the Nobel Peace Prize. She stands in the same circle of honor as the Rev. Dr. Martin Luther King, Jr., His Holiness the Dalai Lama, and Mother Teresa.

In the opening scenes of this compelling and heart-warming documentary, director Davis Guggenheim (An Inconvenient Truth and Waiting for Superman) presents a beautiful animated sequence recounting the legend of the heroic young woman Malala was named after — a 19th century girl who distinguished herself as a rebel against the British in Afghanistan. Malala's father, Zaiuddin Yousafzai, chose the name for his daughter because he was convinced that she would become an extraordinary person. And she has. 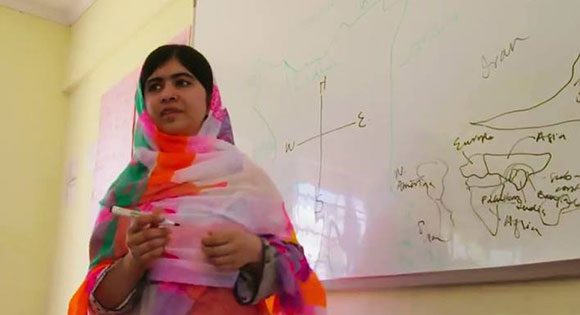 When the Taliban took charge of Malala's village in the Swat Valley of Pakistan, they began a systematic attack on education, especially for girls; many schools were blown up. At the age of 11, she began blogging about this discrimination and her personal experiences as a girl living under this oppressive regime. She also spoke out publicly.

Then in October of 2012, when she was 15, Malala was shot in the head by a Taliban fighter as she sat on a school bus. Defying all odds, she survived and was moved to England for surgery. Due to the severity of the wound, this idealistic teenager spent months in the hospital recuperating and receiving therapy for the left side of her face, which remains partially paralyzed.

Guggenheim uses news footage to tell some of Malala's story and also takes his cameras into her current home in Birmingham, U.K. He draws out the warmth within her uprooted family with scenes of her brothers teasing Malala and the teenager sharing pictures of her favorite movie stars. 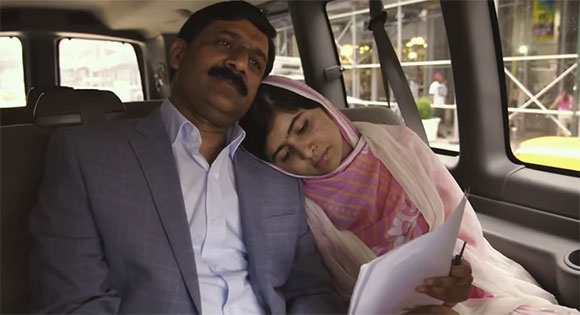 Malala remains very close to her father and as she gets stronger, he travels with her around the world as she campaigns for women's rights in Kenya and Nigeria, where 300 girls were snatched away from their families by Boko Haram, an extremist Islamic group. Malala expresses her dismay that the Taliban have "tarnished the beautiful face of Islam" by their scorn and degradation of Muslim women.

Best of all, the director effectively showcases Malala's views not only on women's rights and girls' education, but also her beliefs in reconciliation and nonviolence as the path to peace. Included are excerpts from her speech before the United Nations in June 2013 (see YouTube video below and transcript here). She concluded with this call to action:

"Let us pick up our books and our pens. They are our most powerful weapons. One child. One teacher. One book. One pen can change the world. Education is the only solution. Education first." 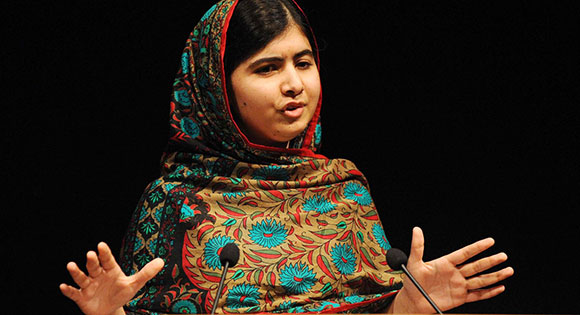 Millions of girls and women have been emboldened by Malala's love, loss, and courage to stand up and speak out for women's rights. Don't miss this astonishing documentary about a true prophet and peacemaker in our time.

Curriculum Guide (pdf) for the film

Discussion Guide (pdf) for the film

I Am Malala, bestselling memoir