Directed by Peter Landesman
A gifted Christian pathologist takes on the National Football League over the life-threatening consequences to players of violence in the game.

"I believe in … rough, manly sports. I do not feel any particular sympathy for the person who gets battered about a good deal as it is not fatal."

Who we are, why we are here, what we stand for, and where we are going — these are but a few of the mysteries that we must unravel on our spiritual journey. These challenges are at the center of the true story of Dr. Bennet Omalu (Will Smith), a Nigerian-born forensic pathologist with a special interest in neuropathology. He works in the Pittsburgh coronor's office where he performs autopsies on the dead bodies, trying to determine the cause of death. A key to understanding and appreciating the patience, dignity, and caring manner of this doctor is the reverence ritual he uses as he begins to work on those he calls his "patients." Taking a hand, he addresses the body by name: "I need your help. We are in this together. Please help me find out what happened to you." He uses clean instruments on each body and takes his time with the procedure. Never before in a movie have we seen such a beautiful example of respect for the dead. 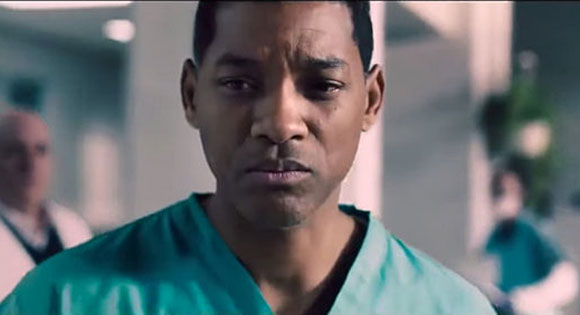 Omalu's Christian faith plays a large role in the way he works and the gentle nature he demonstrates with everyone he meets. He is a scientist who takes great pleasure and pride in his love of learning. And his life-long dream of becoming an American citizen is just around the bend. But everything he has achieved is put in jeopardy when he does the autopsy on Mike Webster (David Morse), a 50-year-old Pittsburgh Steelers' Hall of Fame football star who had been struggling for years with depression, memory loss, drug dependence, and poverty, living in a truck.

"Every time you step on the football field in between those lines you're putting your life, your career, every single ligament in your body in jeopardy."

Omalu is initially puzzled by this case. Webster's brain and skull appear normal, yet he has died young with advanced dementia. He insists there must be an explanation and ends up spending $20,000 of his own money so that he can study samples of Webster's brain tissue. He discovers that the repeated hits to Webster's head during his football career – as many as 70,000 hits -- have caused the production in his brain of abnormal amounts of Tau protein, usually seen in Alzheimer's patients. He releases an article in a scientific journal where he names this degenerative brain disease "chronic traumatic encephalopathy" (CTE). 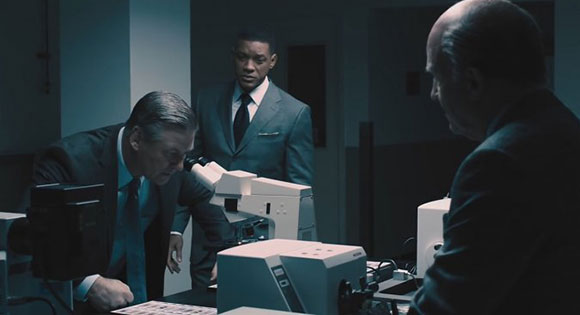 The article stirs a firestorm of angry denial from the powerful National Football League, a multibillion dollar business whose doctors and club owners begin a multi-leveled campaign to discredit Omalu's report and to paint him as an incompetent quack from Africa. In addition, loyal football fans assault him with death threats on the phone.

"Football fans share a universal language that cuts across many cultures and many personality types. A serious football fan is never alone. We are legion, and football is often the only thing we have in common."

Writer and director David Landesman draws out a rounded and rousing performance from Will Smith as the zealous pathologist who is compelled by circumstances beyond his control to discern whether or not to continue his crusade, given the formidable power and clout of the National Football League.

"My idea of a good hit is when the victim wakes up on the sidelines with train whistles blowing in his head . . . I like to believe that my best hits border on felonious assault." 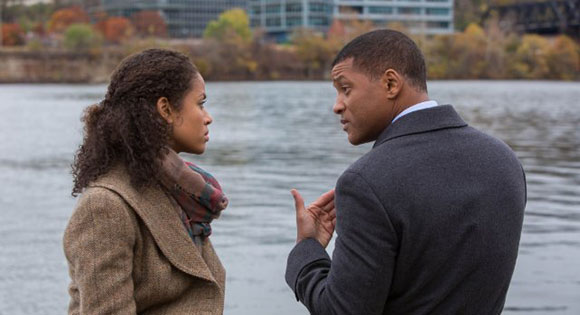 Luckily, the idealistic pathologist has the love and encouragement of Prema (Gugu Mbatha-Raw), his wife, an immigrant from Kenya. As pressure mounts, they worry that they could be deported. Meanwhile, his mentor, Dr. Cyril Wecht (Albert Brooks), becomes the target of an FBI investigation, which he suspects results from his support of Omalu. Dr. Julian Bailes (Alec Baldwin), the former team doctor for the Pittsburgh Steelers, offers his help, admitting he feels guilty that he did not do more for the football players under his care. But Omalu is not sure whether he can trust him.

"Pro football is like nuclear warfare. There are no winners, only survivors."

— Frank Gifford, former player, ABC broadcaster, who was diagnosed with CTE after his death

This work and the reactions to it by those around him raise all those spiritual questions for Omalu, especially what he stands for. He sums it up with one imperative: "Tell the truth." By bringing his story to a broader public, the filmmakers are contributing to that goal. 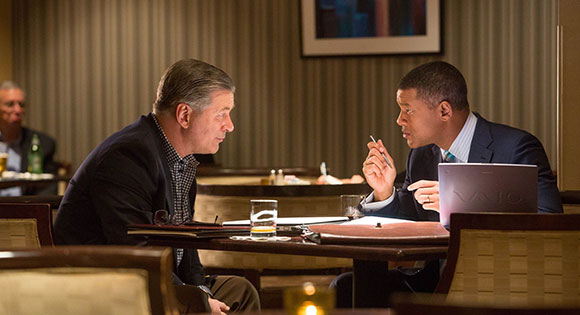 Concussion is one of those rare films that can be experienced alongside media reports about this still controversial subject. Be sure to stay seated at the end of the film for some enlightening series of data on CTE and other pertinent matters. Here are two pivotal quotations from the screenplay which reveal the power of those who stand against Dr. Bennet Omalu.

Dr. Omalu is meeting with a doctor for the NFL. Does Omalu understand the implications of what he is doing by suggesting that football causes brain damage? The NFL advocate explains, "If 10 percent of mothers in this country would begin to perceive football as a dangerous sport, that is the end of football."

In another scene, Dr. Omalu learns from his boss and mentor about the NFL opposition to his research: