Eye in the Sky

Directed by Gavin Hood
An ethical and immersive film about the collateral damage of drone warfare.

With the emergence of global terrorism and the sophistication of modern technology, the rules of war have changed drastically. The nature of the battlefield has changed, raising new complicated considerations. And the legal and moral questions surrounding allowable collateral damage are more troubling and scary.

Eye in the Sky is the first film to take us inside a top secret drone operation involving a large group of soldiers, military commanders, politicians, and lawyers. The recent film Good Kill also dealt with drone warfare but it focused on the aftershock suffered by a Navy pilot on a deadly mission. 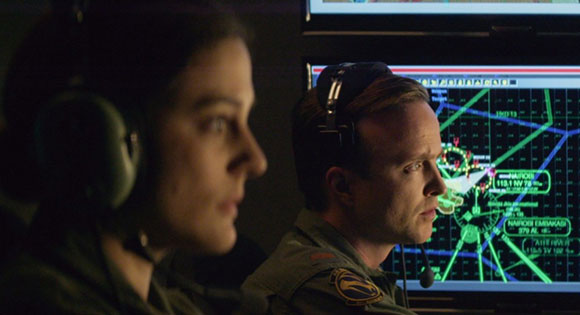 In the opening scenes of the film, we see Alia (Aisha Takow), a nine-year-old girl who lives with her parents in a Nairobi slum. While her mother, Fatima (Faisa Hassan), makes bread for her to sell in the streets, she twirls a hula hoop her handyman father (Armaan Haggo) has made for her. He warns her not to play with it in front of any of his religiously fanatical clients who do not approve of such things.

Colonel Katherine Powell (Helen Mirren) has been tracking a UK citizen and her husband for six years; they are terrorists on the most wanted lists of several countries. Working from a bunker in London's GCHQ (Government Communications Headquarters), she is elated when Major Moses Owiti (Vusi Kunene), an African who is working with the British military with the support of the United States, confirms that the two terrorists along with others have been located in a house in Nairobi. 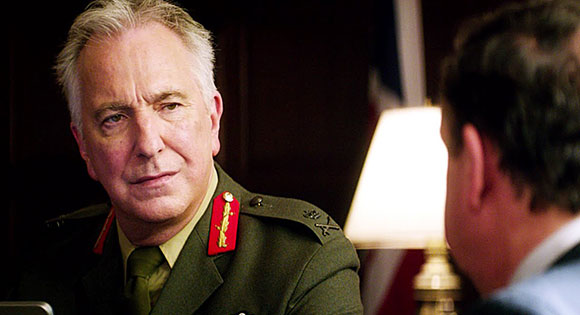 Also part of this mission are Lt. Colonel Frank Benson (Alan Rickman), a gung-ho military man who believes that politicians should let experienced warriors make the decisions regarding when and where to kill terrorists and suicide bombers. As he sits in a Whitehall boardroom in London, he is forced to cope with a small group of British politicians and lawyers who must be consulted after Powell's mission turns from a "capture" to a "kill" mission. Other players in this engrossing drama are Air Force Lieutenant Steve Watts (Aaron Paul) and his partner Carrie Gershon (Phoebe Fox) who are in a Las Vegas drone-piloting facility 9000 miles away from Nairobi. A crucial person in the operation is Jama Farrah (Barkhad Abdi), Owiti's "man on the ground" who sends a tiny beetle-shaped drone (a Micro Aerial Vehicle or "MAV") into the house where the terrorists are meeting in order to verify their identities. In the process, the spy beetle records two men being armed as suicide bombers. This changes the urgency of the mission. 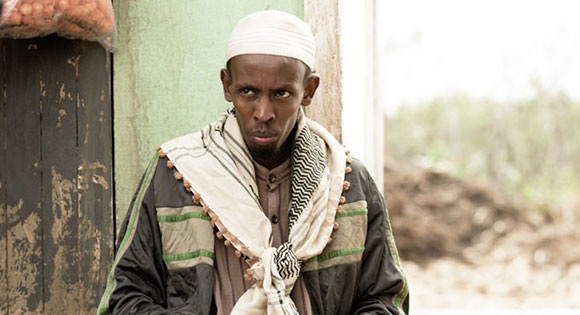 The director of this incredibly tense and totally immersive drama is Gavin Hood whose Tsotsi, based on a novel by Athol Fugard, focused on a violent young man whose life was turned around in a cruel and poverty-stricken place. This time out, he makes the most of the outstanding acting of this ensemble cast and the ethical screenplay by Guy Hibbert which conveys the life-and-death decisions which must be made by all those directly and indirectly involved in the war against terrorism.

When it becomes clear that Powell intends to bomb the house where the terrorists are meeting, we realize that Alia, who can clearly be seen by all the decision-makers watching through the remote cameras, will likely be killed as collateral damage of the mission; she is selling bread from a table on the street right next to the target. Hood and Hibbert cover the moral, legal, political, and military aspects of this contingency.

Eye in the Sky enables us to see how drones have changed everything we have ever thought or felt about war, technology, and the value of the lives of innocent noncombatants.

R - some violence images and language