The Sea of Trees

Directed by Gus Van Sant
A beguiling spiritual journey about grief, guilt, and the continuation of love after death.

"Learn to get in touch with the silence in yourself and you will know that everything in this life has a purpose; there are no mistakes, no coincidences, all events are blessings given to us to learn from."

Director Gus Van Sant is fascinated with death and the mysteries surrounding it. He has a special interest in the ways individuals work out their destinies in concert with others. His 2011 film Restless is an offbeat and ruminative drama about two teenagers who are obsessed with death for different reasons. His minimalist drama Gerry is a parabolic tale about the mysteries of identity, fate, and the harsh realities of wilderness experiences.

Considering the spiritual dimensions of these two prior films, we are not surprised that in his latest film Van Sant shifts gears and pursues the meaning of our lives on earth, the pain and guilt that often accompanies deep grief, the thinness of the veil between time and eternity, and the continuation of love beyond death. These are all strong themes in The Sea of Trees.

Arthur Brennan (Matthew McConaughey) is a science teacher and writer who has purchased a one-way ticket to Aokigahara, known as the suicide forest or "the perfect place to die" at the bottom of Mount Fuji in Japan. In this lush green setting under the swaying branches of trees, men and women end their lives by hanging themselves or overdosing on drugs. 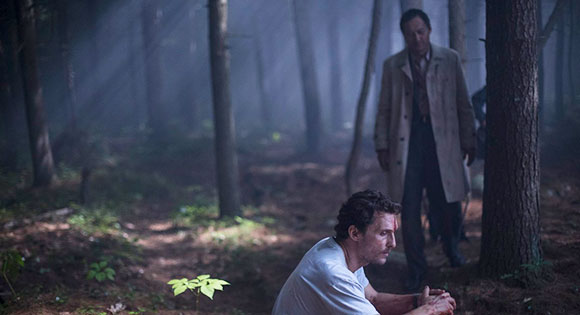 Arthur walks into the forest, settles down under a tree, and begins to take some pills. But his suicide is interrupted by Takumi (Ken Watanabe), a tattered and bleeding man in need of care. Brennan empathizes with the Japanese man who has lost his job and is bereft of his dignity. Although fully intending to return to taking his own life, this kind-hearted American does what he can to help Takumi find his way out of the forest. Ironically, both men have passed by a sign which says, "Please think again, so that you can make your life a happy one."

Through a series of flashbacks, we learn of Brennan's unhappy and combative marriage to Joan (Naomi Watts), an alcoholic who gives him a hard time over his meager salary. She works as a real estate agent to support both of them. She has not forgiven him for having an affair several years ago. When she has to have surgery for a brain tumor, things change between them. 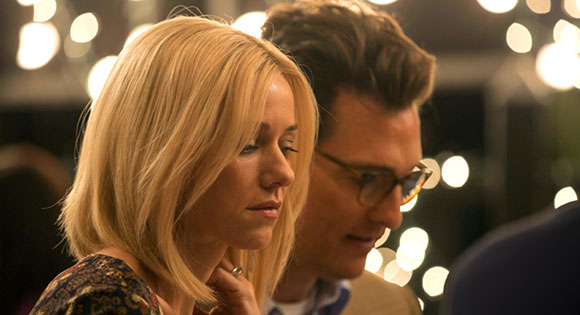 As a director, Van Sant is interested in the breakthroughs that can come through breakdowns. These events are often shrouded in mystery and reason is unable to make sense of these baffling and surprising events. Screenplay writer Chris Sparling fills the last third of the film with intimations of the great gifts that can be hidden in death. The film is packed with symbols that point to its spiritual teachings. We are discussing a few of them in this review, and we encourage you to look for others.

For those who believe in the spiritual world, every moment is an opportunity to decide whether to help those who are in need. That is why Brennan's taking care of Takumi is so touching. If you choose to see this Japanese man as coming from the spirit world, you will recognize him as Brennan's inner teacher who can take him beyond science to a richer and deeper sense of reality. 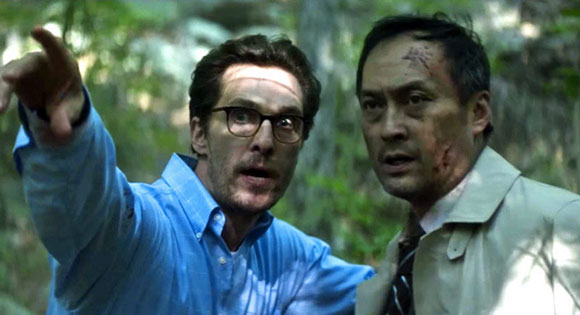 The Sea of Trees moves slowly with many scenes at night or in dark shadowed places. As the characters stumble through the forest, there are falls, lost paths, and dead ends as well as moments of comfort and healing. In many primal religions, trees are seen as sentries along the roads into and out of the spirit world. Perhaps that is why those who want to end their lives seek refuge and release among the trees in this forest.

Fire is the one element that is most like living Spirit and perhaps that is why the pivotal scene in the film takes place at night around a fire. Sharing details of his marriage, Brennan is finally able to get in touch with his guilt for bringing so much pain into Joan's life before her tragic death. The forest is a kind of purgatory where he can experience purification through confession of his sins. Saying "I'm sorry" becomes transformative.

A final theme of the film is the endurance of love beyond death. Many individuals have had encounters with deceased relatives and friends (see our curated piece "Films about Heaven, Angels and the Afterlife"). For the most part, these loved ones bring messages of reassurance and hope. We are just beginning to realize what primitive cultures have proclaimed all along: the veil between time and eternity is thin; another world is close and constantly available to us.

Life is drenched with mystery, and no matter what we do, we can never cut through it all and grab hold of the answer, the one explanation. "X" factors abound, upsetting our rational conclusions. The Sea of Trees is yet another opportunity to open yourself to the spiritual realm where, as French writer François-René de Chateaubriand once put it, "There is nothing beautiful, sweet or great in life that is not mysterious."