Directed by Oliver Stone
An inspiring portrait of a courageous whistle-blower who alerted us to the demise of privacy.

We first began to ponder the heroism and courage of Edward Snowden, the American whistleblower who worked as a contractor for the National Security Agency, by watching Citizenfour, a riveting documentary directed by Laura Poitras. Interviews with Snowden revealed the immensity of what he had seen and experienced of the secret surveillance state. Citizenfour won the 2015 Oscar for the Best Documentary.

In a column by The Editorial Board of The New York Times, dated January 1, 2014, we read:

"Seven months ago, the world began to learn the vast scope of the National Security Agency's reach into the lives of hundreds of millions of people in the United States and around the globe, as it collects information about their phone calls, their email messages, their friends and contacts, how they spend their days and where they spend their nights. The public learned in great detail how the agency has exceeded its mandate and abused its authority, prompting outrage at kitchen tables and at the desks of Congress, which may finally begin to limit these practices."

Snowden, directed by Oliver Stone, fills in some of the background to this whistleblower's actions. In this poignant portrait, we first see Snowden (Joseph Gordon-Levitt) as an earnest patriot who is inspired to defend America after 9/11. In 2004, he joins the United States Army Rangers, but during training, his physical stamina is found wanting and he badly injures his leg in a fall. Soon afterwards, Snowden decides to devote his life and brilliant computer science talents to the CIA. Scoring very high on a test, he catches the eye of Corbin O'Brian (Rhys Ifans) who decides to make use of this young man's brains and skill set in the war on terrorism. He tells him that 20 years from now "Iraq will be a hellhole no one cares about" whereas the real challenge will be competition with China and Russia in cyberwarfare. O'Brian has high hopes for Snowden's success in the intelligence community.

At the Hill, the CIA training center in Virginia, this newcomer meets and befriends a middle-aged computer wizard (Nicholas Cage) who shares with Snowden how he was punished for his initiative in creating new programs. "You would think that intelligence would count in the intelligence community," he says. But "what counts is military-industrial happiness." 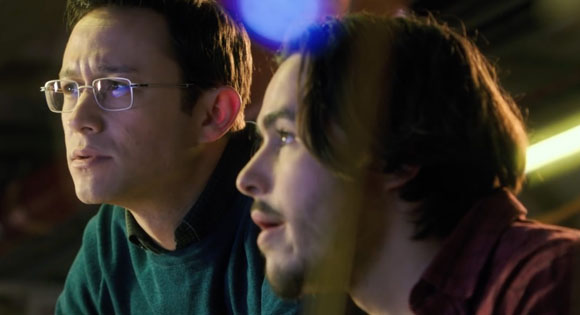 Assigned to the National Security Agency and its data-gathering operations, Snowden spends time in Geneva, Tokyo, and Hawaii. Perhaps the most telling events which touched his conscience and spurred him to action are meetings with Gabriel Sol (Ben Schnetzer), computer wizard who has access to a program known as XKeyscore, a search engine that can take users right into the homes of world leaders, ordinary citizens, or enemies of the state via computers, phones, webcams, or screens. The end result is that the NSA has the capacity for tracking every cell phone in the world! Or put another way, these technological tools make it possible to run "a Dragnet on the whole world." Snowden is stunned by all this, but Gabriel sums it up simply: "This is not about terrorism. It's about economic and social control. It's about protecting the supremacy of our government."

Snowden is further shocked when during a meeting with his CIA mentor, O'Brian, he is told that Americans don't really want freedom, they want security. And to achieve that, the government needs to wage a secret surveillance war. "Secrecy is security and security is victory."

In his work for NSA in Hawaii, Snowden tallies up reports indicating that in one month alone in 2013, this agency collected 97 billion pieces of information from computer networks worldwide. At the height of his career, when he is just 29 years old, he decides to download from the NSA computers enough information to tell the world what is really going on.

Proceedings at the Mira Hotel in Hong Kong

Director Stone recreates the secret meetings in Hong Kong that we saw in Citizenfour. Present are Laura Poitras (Melissa Leo), the filmmaker; Glenn Greenwald (Zachary Quinto), an investigative journalist for The Guardian; and U.K. intelligence journalist Ewen MacAskill (Tom Wilkinson). They plan release of the phenomenal data Snowden has taken from computers at the NSA. The tension in the hotel room is very high given the imminent dangers they all face once the articles and reports are made public. 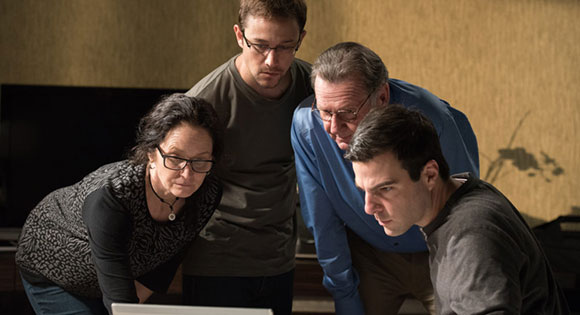 Watching their conversations, we realize that Snowden has put everything in his life on the line in order to expose the truth about the American surveillance state. Admitting that he left a digital footprint behind so that he would be identified as the source of the leaks, we realize his incredible courage in taking public responsibility for what he has done. Flashbacks to his life with his girlfriend Lindsay Mills (Shailene Woodley) show us more of what he has given up.

Privacy used to be a vital word treasured in our culture. It stood for a tangible line drawn in the world (Private, Keep Out) or it referred to an intangible circle surrounding the individual (my private life is my own affair). But perhaps because of all the emotions linked to it, legal experts and civil libertarians have had a difficult time defining the nature and extent of the basic right to privacy. Which is too bad given what is happening now. Today's technology puts an end to privacy and gives those in power control over the lives and secrets of ordinary citizens. 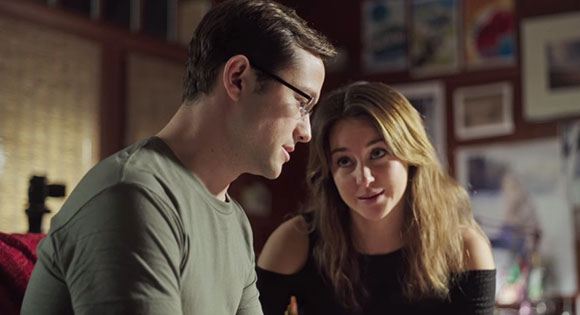 Watching the multi-layered and complicated story of Snowden's act of whistleblowing gives us an extraordinary opportunity to clarify our values, thoughts, and feelings about the surveillance state. We agree with those who commend this young man, now living in exile in Russia, as an astonishing hero who has brought important matters out of the shadows and into the public domain where they can be discussed and evaluated.

In an article on NewYorker.com about Snowden, Daniel Ellsberg, who leaked the Pentagon Papers, concludes:

"Snowden did what he did because he recognized the NSA's surveillance programs for what they are: dangerous, unconstitutional activity. This wholesale invasion of Americans' and foreign citizens' privacy does not contribute to our security; it puts in danger the very liberties we're trying to protect."

R - language and some sexuality/nudity