Directed by Susannah Bier
A fascinating and well-acted glimpse of espionage in the post-Cold War era.

In this six-part miniseries, which originally aired on the AMC cable network, Richard Roper (Hugh Laurie) is a cocky, shrewd, and power-hungry billionaire who is negotiating a very profitable arms deal. It promises to add significantly to his coffers and also to kill many people. His comment reveals where he is coming from: "Armed power is what keeps the peace." 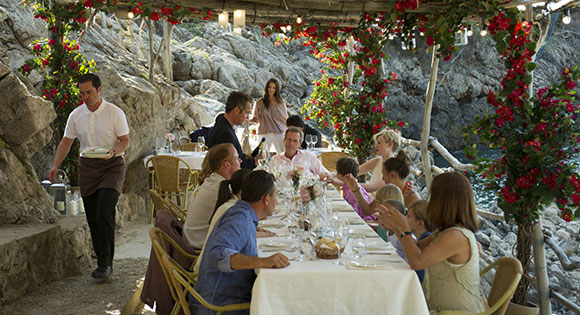 Whereas other men in his shoes would be nervous about the enormity of the deal, this wheeler dealer seems more concerned about the volatile emotions of his alluring American girlfriend Jed (Elizabeth Debicki). He also must keep in shape and get plenty of sun to play his public role as a philanthropist. Meanwhile, he enjoys the luxury and the perks of pool-side meetings on his lavish Mediterranean estate.

Jonathan Pine (Tom Hiddleston) is a former British soldier who served in Iraq and has landed a splendid job as night clerk in a posh Cairo hotel. When a woman gives him some sensitive information, which he turns over to British intelligence, one of Roper's men kills her. Angela Burr (Olivia Coleman), an off-the-books British intelligence agent, comes up with the idea of recruiting Pine to infiltrate Roper's inner circle and bring him down. 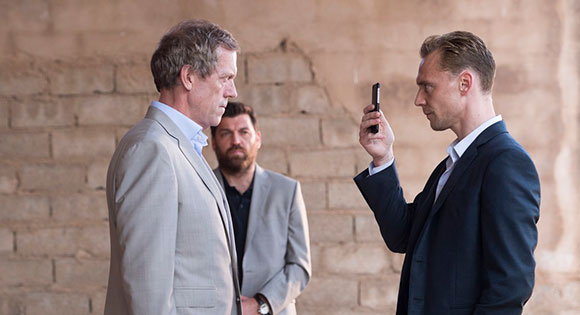 The night clerk is a smooth talker and a charismatic fellow who leaps at the chance to play a dangerous role and to keep everyone around him mystified as to his true identity. Aching for the definitive outcomes of espionage of the past, Burr knows that spying in the post-Cold War era is a different kind of game. Even with her street smarts, this tough pregnant woman gets into deep trouble when she witnesses the widespread corruption within the English intelligence community.

Susanne Bier (Open Hearts, Brothers, After the Wedding, In a Better World) directs this brilliantly acted thriller based on John le Carre's 1993 novel. Olivia Colman shines as the messy and often manic Burr who is obsessed with putting Roper behind bars for the rest of his life. As the two gentlemen warriors who fight each other with words, lies, and glowing testaments to one another's distinctive gifts for standing apart from the crowd, Laurie and Hiddleston excel in their performances. (Coleman, Laurie, and Hiddleston all won Golden Globes.) A special nod must go to Tom Hollander as Corky, one of Roper's inner circle who does all he can to prove that Pine is not to be trusted.