Directed by Various Directors
Thought-provoking documentary by 18 directors on the drama, the varied political talk of citizens, and the surprises of Election Day 2016.

11/8/16 will be screened in some theaters beginning November 3, 2017; it will also be available on-demand on that date.

Political talk has a long tradition in the United States. Since the days of the founding fathers, the view has persisted that the political health of the country depends upon the open exchange of ideas, opinions, and perceptions about the nation's identity, goals, and actions both home and abroad.

Benjamin R. Barber put it well in his book Strong Democracy: "Talk is the principal mechanism by which we retest and thus repossess our convictions." Without constant dialogue about American democracy's value and meaning, it will become a static condition rather than a dynamic political process. In fact if democracy is to thrive, we all need more practice in political talk as a critical ingredient of active citizenship. 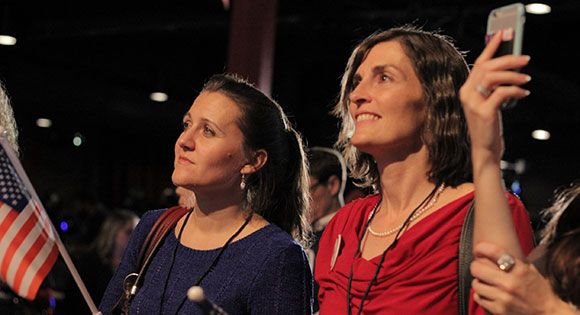 11/8/16 is a timely collaborative documentary by Jeff Deutchman that focuses on the political talk, thoughts, and feelings of supporters of Donald Trump, Hillary Clinton, and two third party candidates on Election Day. This wide-ranging film follows in the spirit of the director's previous film 11/4/08 which focused on followers of Barack Obama on the day he was elected President.

Jeff Deutchman, who curated both of these snapshots of a deeply polarized nation, has said of this film:

"I wanted to attempt a reckoning with America at large, in all its vastness, its chaos, and its confusion. I enlisted an army of filmmakers who had ties to different regions of the country so that we could create a sweeping canvas of a single day. We wanted to make sure that we captured as many aspects of American life, and of American opinions, as possible – no other country contains such multitudes; that's the source of many of our strengths and our weaknesses. Where that nets out is the subject of this film. There is no such thing as 'too soon' when it comes to confronting and trying to understand the country that we live in. We need this now.' "

Paul Davidson, executive V.P. of film and television at the Orchard, agrees with this thematic emphasis and even goes one step further:

"I view this almost as the 'Titanic' of election docs. We all know how it's going to end, but when you meet these people, you become invested in their lives. There are so many fascinating stories, that at the end of the day, you have a greater understanding of what was on people's minds." 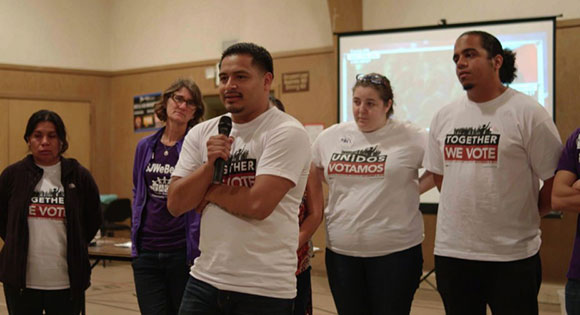 This portrait of election day was created by eighteen accomplished filmmakers, including Alison Klayman (Ai Weiwei: Never Sorry), Yung Chang (Up the Yangtze), Bassam Tariq (These Birds Walk), Martha Shane (After Tiller). They sought out stories in 27 states with people from a variety of class, ethnic, and religious perspectives.

Here are some of the 16 individuals who are featured. They share their responses to the candidates, the long and contentious political campaign, and the surprising outcome of the race for President.

After listening to the political talk of these citizens, we watch journalists at the Los Angeles Times and Philadelphia's public radio station WHYY scramble when they realize they must set aside their headlines and stories about the election of the country's first woman president and announce Trump's triumph instead. 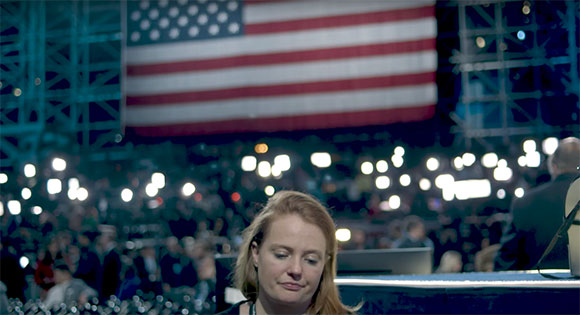 By the end of the day, the mood for many of the featured people has changed. We see the weeping and the sadness of Hillary's supporters fill the gigantic Javits Center in New York City where her victory was to be celebrated, whereas elsewhere, Trump supporters hoop and holler when they realize their man has pulled off an historic upset.

Not bothered or bewildered by Trump's win or Hillary's defeat, a homeless Honolulu man sits beside his tent by the beach and basks in the silence of the evening with the ocean nearby. Like millions of others, he stands for those who have opted out of participation in the political system.

Be Kind to Each Other
A year after the election, Americans are still talking about the surprising result. The polarization evident in the political talk on election day has not abated. It's time that we take another look at each other. In his New York Times column, Nicholas Kristof wrote in April:

"Nothing I've written since the election has engendered more anger from people who usually agree with me than my periodic assertions that Trump voters are human, too. But I grew up in Trump country, in rural Oregon, and many of my childhood friends supported Trump. They're not the hateful caricatures that some liberals expect, any more than New York liberals are the effete paper cutout that my old friends assume.

Bring Joy to the Voting Booth
In a pre-election Ted Talk, Eric Liu, a former political speechwriter, notes that many people talk about voting as a civic duty and the responsibility of an adult. But he also thinks it is time to bring joy into the activity. Watch his talk here. Among many good points, he makes this one:

"What we need today is an electoral culture that is about being together, in person, in loud and passionate ways. … Imagine if we had, across the country right now, in local places but nationwide, a concerted effort to revive a face-to-face set of ways to engage and electioneer. … Around the world, today, millions of people are voting like this. In India, elections are colorful, communal affairs. In Brazil, election day is a festive, carnival — type atmosphere. In Taiwan and Hong Kong, there is a spectacle, eye-popping, eye-grabbing spectacle to the street theatre of elections."