Directed by Laure de Clermont-Tonnerre
Uplifting story about how a wild mustang becomes a spiritual teacher to an emotionally shut-down man.

According to the statistics on the screen at the start of this film, there are more than 100,000 wild mustangs roaming the American West. Each year thousands of them are rounded up, presumably in order to prevent over-population, but also because ranchers want to use the land for their cattle. Some are euthanized or kept indefinitely in enclosures, but a lucky few are sent off to be trained by prisoners in correctional facilities for auction to ranchers, border patrol agents, and experienced riders.

Roman Coleman (Matthias Schoenaerts) is a prison inmate who admits to being silent and antisocial. The authorities have decided to move him from his solitary confinement in a maximum security prison to another prison situated in the Nevada desert. He doesn't fare too well in this place. He slams his fists on the table during an introductory chat with an anger-management therapist (Connie Britton). When his daughter (Gideon Adlon) visits to get him to sign some papers, he screams at her and asks her not to visit again. 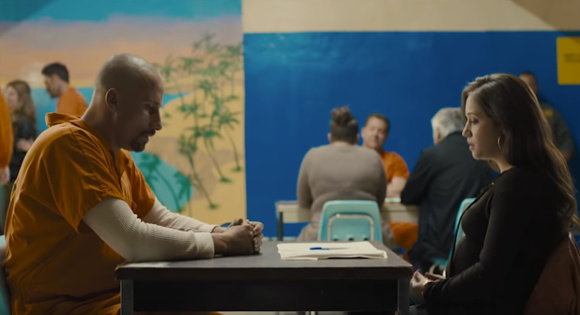 Assigned to do "outdoor maintenance," Roman observes some of the other inmates working with wild mustangs. Myles (Bruce Dern), the crusty and critical trainer in charge of the program, explains that they have 12 weeks to break and train the horses before they are auctioned off. He senses a connection between the wildest new horse on the lot and this angry convict. Henry (Jason Mitchell), a jovial prisoner who already knows the ropes of working with the dangerous horses, decides to help Roman with a horse he names Markus. 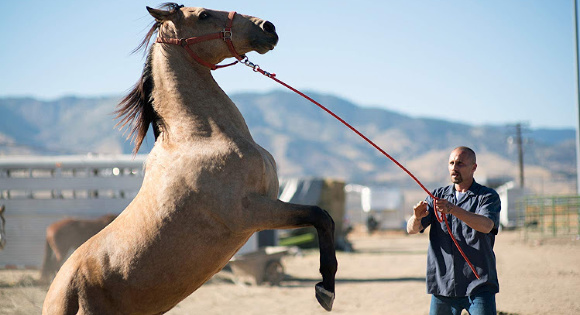 First-time feature filmmaker Laure de Clermont-Tonnerre brings to The Mustang a refreshing admiration for the plight of the wild horses who for centuries have roamed freely over the Western prairies. In thematic sync with this story is her uplifting dramatization of the bond that develops between Roman and Markus. The inmate soon learns that if he is to control the horse, he must first control himself. In a very moving scene, Markus finally comes close, seeming to sense the struggle his human companion is going through. 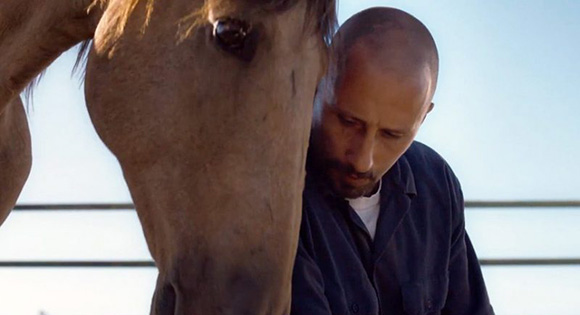 In our spiritual perspective, the mustang serves as a teacher to Roman. He helps the pent-up outsider get in touch with the emotions he has eschewed for years.

We have a batch of favorite films about special relationships between humans and horses, including Buck, The Black Stallion, The Horse Whisperer, Seabiscuit, Secretariat, and War Horse.

More recent releases are Lean on Pete and The Rider, both ofwhich made our list of The Most Spiritually Literate Films of 2018. The first focuses on the camaraderie of a teenager and a downtrodden racehorse and the arduous journey they take together. The second revolves around a rodeo cowboy and the hard road he travels after a fall from a horse.