Directed by Olivier Assayas
A dramedy about all the ways digital technology is shaking the book publishing world to its core.

It's such a lark watching French films set in Paris where smart and sophisticated people move gracefully from offices to crowded cafes, to bars, to dinner parties, to living rooms -- and usually also to passionate sex in cozy beds. Along the way, they engage in clever talk about their lives, societal trends, and the future. Eric Rohmer was one of our favorite directors working in this style, and writer/director Olivier Assayas is another.

The lead characters in his new film, Non-Fiction, are involved in the publishing world which is having to deal with the opportunities and challenges resulting from the invasion of digital technology. As in his prior films, Demonlover, Summer Hours, and Clouds of Sils Maria, Assayas reveals the various ways that mainly middle-aged people attempt to deal with the changes affecting all aspects of their post-modern lives. 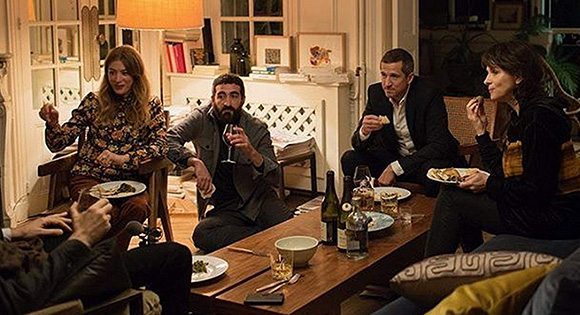 Discussing his approach in an interview in The Los Angeles Times, Assayas states:

"I think people in their everyday life, in everyday conversation, are involved in big ideas — in abstract, complex ideas. It was possible to represent that as long as you used characters your audience would care for, and if there was some kind of tongue-in-cheek approach as opposed to some kind of straightforward, serious lecture." Clever talk and more clever talk is the way forward. In the opening scene of Non-fiction, Alain (Guillaume Canet), a publisher and editor, is meeting with Leonard (Vincent Macaigne), a long-time client who is eagerly awaiting word as to whether his explicitly autobiographical novel will be published. But instead of talking about the book, they discuss Twitter, blogging, and other avenues of communication are affecting how writers reach audiences and indeed, how people in general reach out and stay in touch with each other. Alain's wife, Selena (Juliette Binoche), is an actress on a popular television cop show who finds her success hard to take. She is tired of plots that use revenge to justify violence. She is also breaking off her six-year affair with Leonard, who has thinly disguised their relationship in his novel.

Leonard's partner Valerie (Nora Hamzawi) works for a socialist politician. She is the only one not having an affair. Alain's lover is Laure (Christa Theret), head of the digital division at his publishing firm, but he knows she'll soon drifting off to another job. Assayas is good at bringing out the nuances in his characters' attitudes and behaviors, and he obviously wants us to care about the decisions they make about their relationships. But what we find most interesting and entertaining here are the film's razor-sharp (and sometimes funny) insights into what is happening in the culture, and particularly in the book world. For example, at a conference Alain asks about the town library. He's told the kids still go there because they do like to read, and the old people go there to exchange seeds. All the characters are affected by these changes, and seeing how they respond, we are encouraged to consider how they affect us as well. What, for you, are the implications of these changes?