By Daisy Khan (ed.)
A guide to counter extremism and Islamophobia, and to become an ambassador for peace.

This book is a holistic, research- and evidence-based approach to address the interconnected issues of violent extremism and Islamophobia and to equip the reader with the know-how to become change-makers for truth and peace. It is divided into three sections. Part One, Voices of American Muslims, addresses common misconceptions about American Muslims with research data, like these examples: “American Muslims are the single largest source of tips to law enforcement agencies in foiling terrorist plots,” and “according to Gallup, American Muslims are more likely than any other religious community to reject violence against civilians.” It also provides examples of the many thousands of condemnations against violent extremism issued by Muslims. It effectively demonstrates how Islamophobia and “targeting Muslims for unequal treatment betrays American law and values, and makes America less safe for everyone.” Salam Al-Marayati effectively argues that our “government must adopt a policy that is reflective of the fact that violent extremism is not unique to Muslims but is actually also a problem among white supremacists and other disaffected groups.”

Additionally, Part One clarifies that “shari’ah rulings or religious commandments are similar to the Ten Commandments. Both claim divine authority, but require human interpretation, are religiously binding, and in that sense are ‘sacred law.’ Only some of them are social, and of these, only a very few intersect with government law.” It also provides startling new information, like that “80 percent of 102 anti-Shari’ah bills introduced between 2011 and 2013 were sponsored or co-sponsored by a legislator who supported laws limiting the freedoms of other groups, most notably voter ID and Right-to-Work -- measures that disproportionately impact the rights of Latinos, African Americans, and women.” Part One also offers other important clarifications, like that there is no contradiction between being an American with strong national pride and being a Muslim, and addresses other hot-topics, like misconceptions about Muslim modesty. Also notable are the helpful suggestions for journalists to promote both national security and national unity while undermining extremist groups.

Part Two, Islamic Theology Vs. Extremist Ideology, provides an overview of Islamic beliefs; it includes explanations regarding the Qur’an and Qur’anic critical thinking as well as the life of the Prophet Muhammad, including his redefinition of war as an “effort to remove the injustices and oppression imposed by others. . . . that must not be waged for the sake of the self, spoils, pride, prestige, subjugation, or oppressing other people.” Scholar Ibrahim Malabari clarifies the Prophet’s role:

"the Messenger of Mercy, at God’s direction, attempted to establish rules of warfare that would make war as humane as possible, to encourage peace, and to minimize the toll in human lives. . . . Anyone who studies the Messenger of Mercy’s wars objectively and compares these with other wars in human history, including the wars of our modern times (such as the wars in Iraq, Afghanistan, and the War on Terror) can conclude that his wars were the least bloody – and most humane."

Significantly, Part Two provides examples of the covenants the Prophet Muhammad entered into with other tribes and nations in which he “outlines principles such as freedom of movement, freedom of religion, and equality before the law for people of various faiths who were under his protection and declared Muslims and non-Muslims to be ‘one community.’” One such example is that of the covenant with the monks of Mount Sinai that “protected freedom of worship for Christians and provided them with military protection. Importantly, the Prophet emphasized that any Muslim who violated the terms of this Covenant ‘makes a mockery of his religion’ and ‘dissents from the Messenger of God.’” This section demonstrates that religious pluralism, religious freedom, and interfaith cooperation are core Islamic values enshrined in the Qur’an and the teachings of Muhammad.

Part Three, Preventing Extremist Recruitment, explores the emergence of violent extremism and its consequences, clarifying that more than 80 percent of victims are Muslim and that the majority of such incidents occur in majority-Muslim countries. This section includes enlightening explanations of Daesh’s (also known as ISIS or ISIL) ideology as well as their branding and recruiting strategies. It provides clear delineation between true Islamic teachings and Daesh’s distortions of those teachings, offering helpful explanations of Qur’anic verses taken out of context and of how Daesh violates Islam.

Part Three includes advice on things Muslims should do in their communities, as well as how anyone can respond to and protect against extremist recruitment. Other helpful tools include a counselor’s approach to intervention, media strategies for community leaders, a parent’s guide to social media and online behavior and other parenting tips, a guide to bystander intervention, as well as concise FAQs about Islam. Part Three also includes a touching and uplifting section on Muslim heroes and heroic initiatives as role models and inspirational examples of working for peace and justice.

I couldn’t agree more with Sami H. Elmansoury, founding member of the U.S. Department of State’s Generation Change initiative, who states that “each individual, in spite of varying backgrounds, has a role to play.” Each of us need to do our part to stand up for justice and peace. Every journalist, every parent, every community leader — everyone — can benefit from reading and using this book! 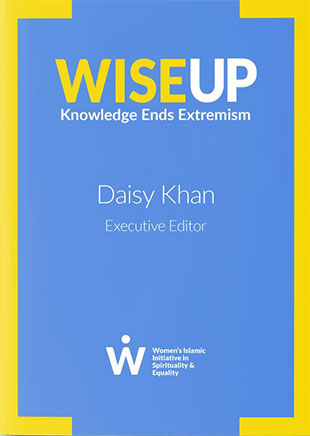 Purchase from WISE Up