Madeleine L'Engle was born in 1918 and spent her formative years in New York City. Early on, she found herself to be much more interested in writing for herself than doing any of her school work. At age 12, she moved to the French Alps with her parents and went to an English boarding school where her passion for writing continued to grow.

Back in the States, she went to Smith College and studied English as she read the classics and continued her own creative writing. She graduated with honors and moved into a Greenwich Village apartment in New York. She worked in the theater, where Equity union pay and a flexible schedule afforded her time to write. She published her first two novels during these years before meeting Hugh Franklin, who became her husband.

Madeleine and Hugh moved to Connecticut to raise their family away from the city in a small dairy farm village with more cows than people. They bought a dead general store and brought it to life for nine years. They eventually moved back to New York City with their three children, and Franklin revitalized his professional acting career and had a long-term role in the popular soap opera All My Children. The family kept the country house, Crosswicks, and spent summers there. In the city, L'Engle was associated with the Cathedral Church of St. John the Divine as the librarian for more than 30 years.

Over the years, Madeleine L'Engle wrote some 60 books, including novels, children's books, essays, poetry, prayers, meditations on the scriptures, and memoirs. Her very popular children's novel, A Wrinkle in Time, was rejected by 26 publishers before being accepted. It went on to win the John Newbery Medal in 1963. Among other themes, it is an imaginative exploration of the best strategies for dealing with shadow presences in our lives; love is the key. A Wrinkle in Time was also once the most banned book in the United States because of conservative Christians' criticisms of L'Engle's portrayals of God, myth, and fantasy.

L'Engle also wrote her memoirs. In one, The Summer of the Great-Grandmother, she shared details of her life in a family, and in Two-Part Invention, she wrote about being a partner in a long marriage. After Hugh's death in 1986, Madeleine kept going through her writing and lecturing. She died on September 6th, 2007, at the age of 88. 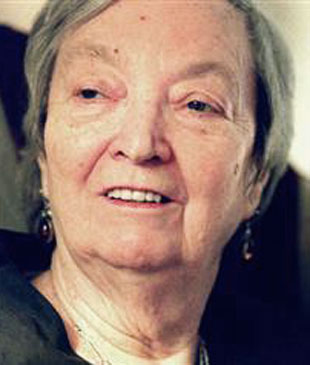