(Image of President Barack Obama presenting Maya Angelou with the Presidential Medal of Freedom: Courtesy of the Office of the White House)

Maya Angelou was born Marguerite Annie Johnson in St. Louis, Missouri, in 1928. Over the course of her life, she was an actor, dancer, singer, playwright, producer, civil rights activist, autobiographer, and poet. Angelou reached a large audience in 1969 with I Know Why the Caged Bird Sings, the first bestselling nonfiction book by an African-American woman; it remained on the New York Times Bestseller list for two years (a record at the time). In the years that followed, she published six more autobiographical volumes.

Angelou's story is a mixture of triumph and tragedy. She and her brother were abandoned by her parents as children, and she was raped at seven by her mother's boyfriend. When he was found murdered, the traumatized girl blamed herself and descended into a five-year silence. She found her voice through poetry and through several years of reading books in the local library.

Angelou went through varied "gigs" as a dancer, a calypso singer in a nightclub, and an actress in a global tour of Porgy and Bess and in an off-Broadway production of Jean Genet's avant-garde drama The Blacks. Along the way, she acted in the Roots miniseries, John Singleton's Poetic Justice, and Joyce Moorhouses's How to Make an American Quilt.

She focused on poetry in the 1990s (though her prose had always sung). In 1992 Angelou herself became a kind of national poet: Bill Clinton asked her to write and perform a poem for his inauguration because “she had the voice of God.” The poem, “On the Pulse of Morning,” became a bestseller, and demand for her books immediately increased 1,200 percent.

In 2011, U.S. President Barack Obama presented Angelou with the Presidential Medal of Freedom — one among dozens of awards given her over her lifetime. Remembered equally as a poet and social justice giant, Angelou died of heart trouble in 2014 in her home in Winston-Salem, North Carolina.

Maya Angelou's ability to inspire hope remains one of her greatest gifts to the world. Let these quotes of hers reignite your hope today.

"Hope and Fear cannot occupy the same space at the same time. Invite one to stay."
— in Sacred Threshold by Paula D'Arcy

"Just like moons and like suns,
With the certainty of tides,
Just like hopes springing high,
Still I'll rise."
— in "Still I Rise" from And Still I Rise: A Book of Poems

"I am working toward a time when everything gives me joy!"
— in Everyday Miracles by Ardath Rodale

"Life is pure adventure, and the sooner we realize that, the quicker we will be able to treat life as art; to bring all our energies to each encounter, to remain flexible enough to notice and admit when what we expected to happen did not happen. We need to remember that we are created creative and can invent new scenarios as frequently as they are needed."
— Maya Angelou in Wouldn't Take Nothing for My Journey Now

Angelou's poem “Still I Rise” boasts of the “richness,” tenacity, and strength of the black female speaker (and all black women), who rises above all attempts to lay her low, who cannot be contained by a history of slavery, lies, and discrimination. Listen to her introduce and read this poem:

Reflect on a time in your personal life or in the life of your nation when joy and peace turned to trial and chaos. Did you or your people preserve your sense of dignity, generosity, and compassion amidst the turmoil? Did you “rise”? What was the most difficult challenge you faced in trying to both survive and maintain your moral character? 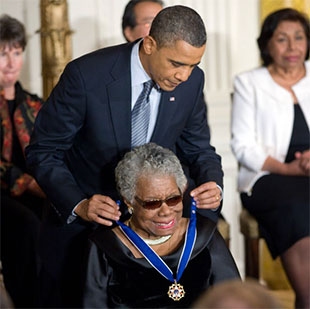 Maya Angelou: And Still I Rise

Down in the Delta