Children in Jeopardy Portraits on Film

A collection of films that depict the plight of children in today's world.

A billion children are under threat, according to UNICEF (The United Nations Children's Fund). One in six is hungry, and one in five does not have access to safe water. Healthcare is delivered to one in seven children. Half of the 3.6 billion people killed in wars since 1990 were children. Not only do conflicts displace communities from their homes, they bring in their aftermath hunger, poverty, and psychological distress. In many cases, children are forced to become combatants in war. Other little boys and girls are kidnapped and sold into the sex slave trade or forced to work in terrible conditions.

The plight of children has been chillingly and poignantly depicted in the following movies from an international group of filmmakers. These stories, many based on real-life incidents, all depicting situations common today, can become spiritual catalysts to our action and prayers on behalf of children who have been denied their rights to a full, free, and happy life.

ABC Africa - A heart-wrenching documentary about efforts being made in Uganda to look after 1.6 million orphans whose parents died of AIDS.

Blood Diamond - Set in Sierra Leone, a shocking film that opens our eyes to the bloody brutality of civil war, including the training of child soldiers.

Born Into Brothels - An extraordinary documentary about a photographer who draws out the wonder and the creativity of some poor kids in Calcutta.

Central Station - A heart-warming story about how an orphan boy in Rio de Janeiro tenderizes the heart of a cynical woman, who finally realizes her kinship with others, young and old.

The Children of Huang Shi - Dares to explore the creativity and the courage that goes into compassionate action during wartime deprivation and violence.

Children Underground - A harrowing documentary about five homeless kids struggling to stay alive on the streets of Bucharest, Romania.

Life, Above All - The engrossing story of the heroism and compassion of a 12-year-old South African who demonstrates selfless love in caring for her very ill mother.

Lilya 4-Ever - A compelling and disturbing film about an abandoned Russian teenager who finds herself an unwilling victim in the global sex trade.

Mondo - The story of how a ten-year old homeless gypsy boy's zest for life has a salutary effect on a small community in Nice.

Nobody Knows - The harrowing story of four children in Tokyo who are abandoned by their mother and forced to fend for themselves over a six-month period.

Oliver Twist - A touching screen adaptation of Charles Dickens' classic about the adventures of a poverty-stricken boy in nineteenth-century London.

Pavee Lacken - A distressing film portrait of a ten-year old Irish Traveller (gypsy) whose life is constricted by poverty and prejudice.

Prayers for the Stolen - An empathy building film about young girls in a Mexican village whose strong friendship helps them survive dangers from without.

Promises - A soul-stirring documentary about the Israeli/Palestinian conflict as revealed through the voices of children who are curious about each other even in a milieu where hatred reigns supreme.

Salaam Bombay! - A remarkable Indian film with a devastating portrait of the deprivations endured by a hungry and homeless boy.

Stolen Childhoods - A powerful documentary that makes the point that we are all one family and the degradation and slavery of one child working in horrible conditions somewhere in the world diminishes us all.

These Birds Walk - A chilling and compassionate documentary about the plight of runaway children in Karachi, Pakistan, and an elderly humanitarian who has created centers to look after them.

A Thousand Months - A sweet movie about the magical little moments of delight and understanding in the experiences of a poor young Muslim boy in a small Moroccan village during the month of Ramadan.

A Time for Drunken Horses - An Iranian film about some poverty-stricken children who demonstrate self-sacrificial love as they assume adult responsibilities on their small shoulders.

Turtles Can Fly - A mesmerizing Iranian film set in Iraq in 2003 that deals with the fallout from both dictators and liberators on the twisted and torn lives of children living in refugee camps.

Welcome to Sarajevo - A harrowing but compassionate film about strength and heart in the presence of extreme pain and suffering. 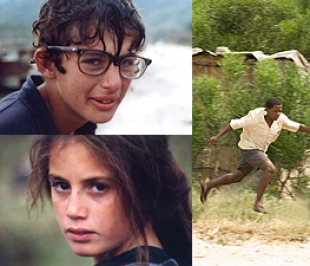