A collection of feature films and documentaries which give insights into Native American history, culture, tradition, and clashes with white America.

Native Americans have great respect for diversity and recognize that there are many teachers all around us. Still, some common threads stand out in this spiritual tradition:

Here is a mix of feature films and documentaries which we think give us fresh insights into Native American history, culture, tradition, and clashes with white America. 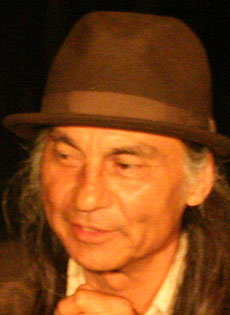 Barking Water (Lorber Films) is a heart-affecting film about an elderly Native American couple on their last journey together: one is dying and the other has chosen to be a loving companion on the trip. They harvest memories and try to come to peace with each other. 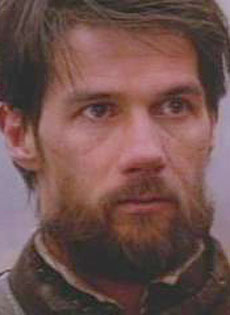 Black Robe (MGM) revolves around a 1500-mile journey made by a Jesuit priest to a remote mission in the wilderness. He is escorted by a group of Algonquin Indians who relish the pleasures of the flesh and believe in the truth of dreams. 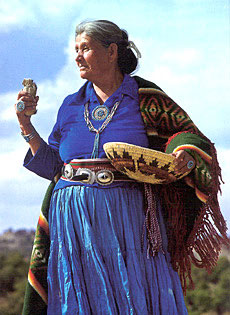 Broken Rainbow (Docurama - also free on YouTube) is a powerful and unsettling documentary dealing with the shameful treatment of Native Americans in the 1970s. The forced relocation of 12,000 Navajo Indians was set in motion by the greed of energy consortiums eager to have access to Navajo sacred lands.

"We do not own the land.
We belong to it.
And by our sweat and breath shall
she know us, and welcome us
upon our return." 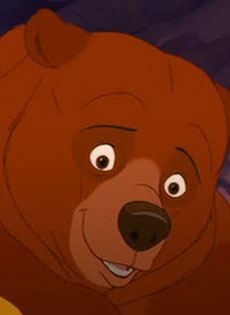 Brother Bear (Walt Disney Studios Home Entertainment) is an animated family film that eschews all the competitive and self-centered values of popular culture and proclaims instead the ancient virtues of Native Americans that are conveyed by the expression "all my relations." 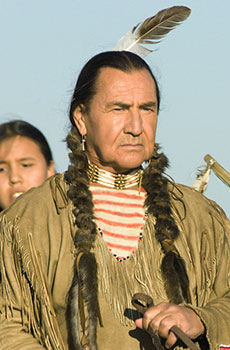 Bury My Heart at Wounded Knee is a powerful drama which charts the greed, racial hatred, violence, deception, and injustice healed upon Native Americans. 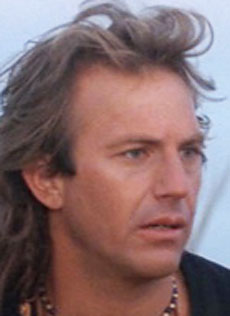 Dances with Wolves (MGM) shows how a stranger in a the Dakota plains during the 1860s finds a community among the Lakota whose values enrich and expand his kinship with the land, its elements, and its animals. This memorable drama is a shining parable about hospitality. 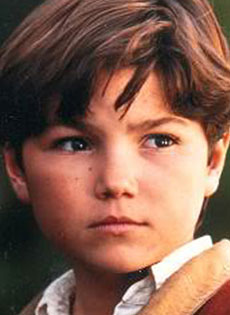 The Education of Little Tree (Paramount) demonstrates how the spirit of an orphaned Cherokee boy in 1935 is stifled when he is forced to attend a school run by whites. The film pays homage to the wisdom of his Native American elders who try to teach him the Cherokee way.

"The trail is beautiful.
Be still." 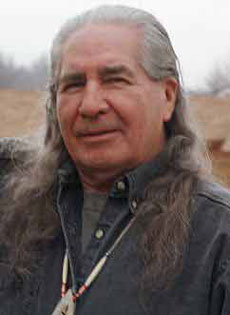 The Faithkeeper (Resolution Video - also available online at BillMoyers.com) is a documentary in which Bill Moyers talks with Oren Lyons, Chief of the Turtle Clan of the Onondaga, one of the Six Nations in the Iroquois Confederation. Some of the subjects covered are history, community, time, rituals, and Native American spirituality. 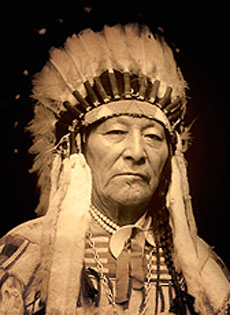 500 Nations (Warner Home Video) is a celebrated eight-part documentary charting the history of hundreds of Indian nations beginning in pre-Columbian times and ending with the battle of Wounded Knee in 1890. It captures the diversity of Native American history, cultures, and lifestyles.

"May I see the spring.
May I with all my people
safely reach it." 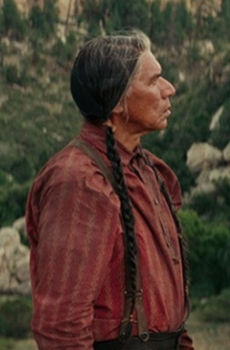 Hostiles (Lions Gate) shows the transformation of a cold-hearted military man who loves battle and has no trouble brutalizing those he sees as enemies or malevolent strangers. When he is ordered to escort a dying Cheyenne war chief from New Mexico to Montana, though, the officer's attitudes and expectations start to change. 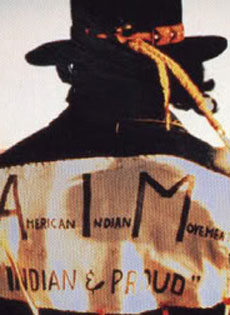 Incident at Oglala (Lionsgate Home Entertainment) is a thought-provoking documentary examining the trials of three Native Americans after the 1975 shootings at the Pine Ridge Reservation in South Dakota. It focuses on the lawlessness of the FBI and the questionable justice meted out to Leonard Peltier. 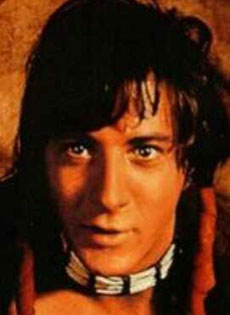 Little Big Man (Paramount) revolves around the adventures of the sole white survivor of Custer's Last Stand at Little Big Horn, who spent five years with the Cheyenne after his family was massacred by the Pawnee. His Indian grandfather, Old Lodge Skins, is a wise man who teaches him all that he needs to become a survivor. A Man Called Horse (Paramount) is a mesmerizing film about the experiences of a British aristocrat in 1825 struggling to survive in a Sioux tribe. Every detail of their life and culture has been thoroughly researched and authenticated.

"I smoke with the Great Spirit.
Let us have a blue sky." 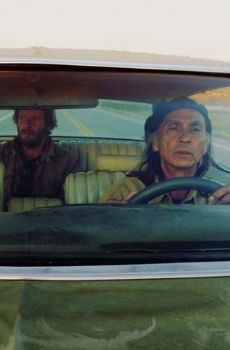 Neither Wolf Nor Dog (Fatback Films) powerfully tells the story of Dan, a Lakota elder who lives on the Pine Ridge Indian Reservation in South Dakota and chooses Kent Nerburn to write a book from his unflinching words about Indian life, past and present. The New World (Warner Home Video) probes the love affair between the daughter of an Algonquin chief and an ambitious soldier of fortune. The drama presents the interaction between two cultures — the Native Americans with their rituals and closeness to the earth and the English with their guns and yearning for gold. 100 Years (Fire in the Belly Productions) brings us the story of Elouise Cobell, a member of the Blackfeet tribe and a banker from Montana who becomes enraged about the callous and inhumane treatment of her people. We see her patient determination as she battles bureaucrats and red tape during a 14-year civil-action lawsuit. Pocahontas (Walt Disney Studios Home Entertainment) is an animated film with a heroine whose soul and spirit are worth emulating. This Powatan princess is a caretaker, a dream weaver, and a peacemaker. The Rider (Sony Pictures Home Entertainment) tells the story of Brady Jandreau, who was an up-and-coming rodeo star when he was thrown from a bucking horse and sustained a serious head injury, cutting short his career. We keenly sense his heartache as he strives to rebuild his life and offers caregiving to another former rider. The Shadow Catcher (Mystic Fire Video) is a serious and sensitive film that pays homage to Edward S. Curtis who sets out to photograph the customs, costumes, and sacred rituals of a variety of Native American tribes. It incarnates cross-cultural openness and respect in memorable ways.

"We are like birds with a broken wing
My heart is cold within me
My eyes are growing dim
I am old." Skins (Millennium) is about what happens when a trickster spirit takes hold of a serious and self-righteous Native American and propels him on a strange and spooky ride. The film is set on one of the poorest reservations in America whose inhabitants have a 50 percent shorter life expectancy than other Americans. Smoke Signals (Miramax) pokes fun at the interface between life on "the rez" (Idaho's poverty-stricken Coeur d'Alene Indian Reservation) and the dominant white culture. It also reveals how ritual and friendship can be healing medicine for anyone caught up in grief. Te Ata (Kino Lorber) is an edifying biographical film about a Chickasaw storyteller intent on keeping her tribe's history, culture, customs, and language alive. She becomes the first Native American to attend and earn a degree from Oklahoma College for Women and is honored by Eleanor Roosevelt. Thunderheart (Sony Pictures Home Entertainment) revolves around a part-Indian FBI agent who is sent from Washington D.C. to investigate the murder of an Oglala Sioux in the Badlands of South Dakota. A tribal policeman, who is conducting his own investigation, finds that mysterious forces are working him over.

"I shall vanish
and be no more,
but the land I now roam
shall remain
and shall not change." Tiger Eyes (Freestyle Releasing) delivers a moving depiction of a teenage girl's quest for a way out of her sadness, grief, and loss over the sudden death of her beloved father. She is lifted and led by the spiritual ministrations of a tender Native American and his wise father. Trudell (Passion River) presents a tribute to the focused and prophetic Native poet and activist who loves the Earth and has made many stands for the dignity of his people. This sobering documentary delivers another portrait of a shadow side of America.