Directed by Sam Mendes
An uncommonly good antiwar film about two British soldiers in World War I sent on a mission of mercy.

1917 is an unusual antiwar film that unfurls over two consecutive April days when two ordinary English soldiers are sent on a dangerous mission of mercy in the fierce battleground of northern France. For three years in World War I, the Allied Forces and the Germans have waged grim combat from their trenches. Death and destruction surround the soldiers on both sides, especially in a no-man's land between them. 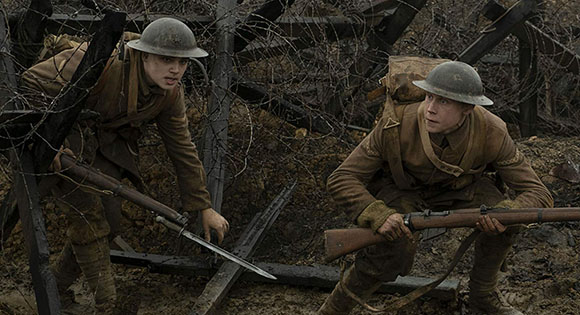 Blake (Dean-Charles Chapman) and Schofield (George MacKay) are ordered by a tough general (Colin Furth) to go on a dangerous mission. The British had thought that the Germans were retreating, but an aerial reconnaissance flight has discovered that they have actually set a trap for the Second Battalion of the Devonshire Regiment. The two lance corporals have only a few hours to traverse nine miles and get orders to Colonel MacKenzie (Benedict Cumberbatch) to cancel their attack before nearly 1,600 troops are massacred. For Blake, this is personal; his brother in the Second Battalion. His companion is less sure about the dangerous mission.

The first segment of 1917 is as chilling, tension-ridden, and scary as any horror film as we watch Blake and Schofield make their way through the filthy, muddy, and smelly Allied trenches. Their trek becomes much more dangerous when they have to cross through the crater-pocked no-man's land where corpses of dead soldiers and horses litter the path. Entering what they had thought were the German front lines they are startled how the land has been pulverized by bombs; nature has been almost obliterated. 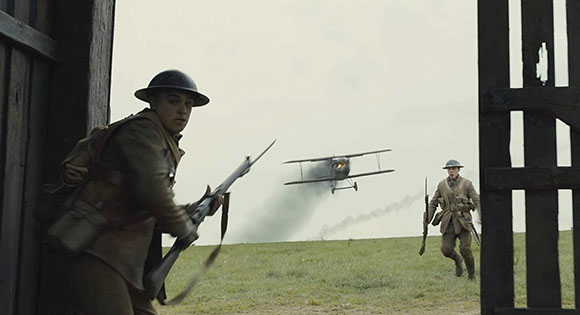 When a German plane is shot down out of the skies, it lands nearly at the two soldiers' feet. They pull the wounded pilot out of the wreckage and are faced with something they are unprepared for. The same thing happens in an encounter with a young German mother (Claire Duburcq) and her little baby after running through a city in flames. A raging river and German snipers create further challenges. These sequences are as griping as any thriller, but they are achieved without special effects.

As he demonstrated most vividly with American Beauty, director Sam Mendes has a gift for taking traditional film genres and sending them into fresh territory. 1917 was filmed to look like it is all shot in one continuous take by cinematographer Roger Deakins. Instead of registering on our senses with raucous noise from bombs, the film sets us down in a war zone where we can meditate in near silence on the barbarity and the death and destruction war brings in its wake. 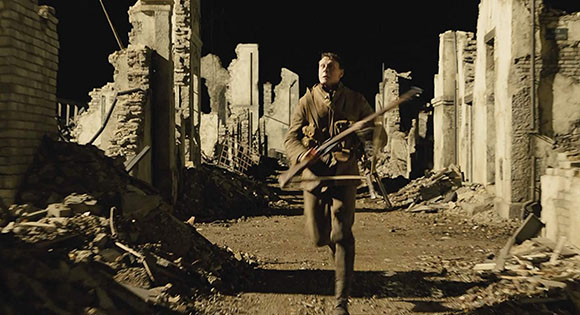 Eight million people died in World War I. It was a shattering historical event which transformed the manner of war more than any prior war. In a very real sense, it taught the world that if conflicts are to be settled by war, the means they use to do it will be constantly changing. Thus a movie like 1917 gives viewers opportunities to reflect on the face of war and practice empathy with those suffering through it.

Trench warfare was new during World War I. Previous wars had seen flanks of soldiers charging across the fields at each other. Now they huddled in trenches, lobbing grenades and bombs at the other side, which could be only yards away. Here are two ways to put yourself into the trenches with the soldiers.

New Weapons of War
Military tactics used prior to this war were abandoned or modified with the introduction of machine guns, barbed wire, and accurate artillery. As the years of killing dragged on, the adversaries relied on armored tanks to sweep the countryside, military aircraft to bomb civilians, and even chemical weapons. The Earth itself became collateral damage.

In our article War Movies for Empathy Practice, written during the American invasion of Iraq, we suggested that people, no matter what their position on a war, practice empathy for those directly involved in it. Veterans tell us that nobody can know what it's like to be in a war without actually being there. But war movies still try to approximate the experience and so are good viewing for empathy practice. Here are three films that take place during World War I.

The Legacy of World War I

World War I was "the first calamity of the 20th century," wrote historian Fritz Stern, " the calamity from which all calamities sprang." Here are a few developments that are part of its legacy.

War Is Not Inevitable

It would seem that people and nations have become resigned to accepting war as the way to solve big conflicts. But there are still some who proclaim that peace must be sought and enacted as an alternative to war. This is the view of Susan Griffin in this excerpt from her essay in Stop the Next War Now edited by Jodie Evans and Medea Benjamin. She writes:

"Very few wars have been judged by history as necessary for self-defense.

"To imagine peace is not nearly as sentimental as to think of war as glorious. In modern warfare, more civilians die than soldiers.

"War is not inevitable. The only thing in the universe that is inevitable is change."